Nellie’s Cafe 1226 W. Hadley Ave. Las Cruces, NM (575) 524-9982 This long time family run restaurant has the distinction of being the first New Mexican restaurant I tried in Las Cruces (other than La Posta in Mesilla, a suburb … Continue reading →

Le Rendez-vous Cafe 2701 W. Picacho Ave. Las Cruces, NM (575) 527-0098 Although Las Cruces is about one-eighth the size of El Paso, there are several cuisines and food experiences offered here that are not available in its much larger … Continue reading → 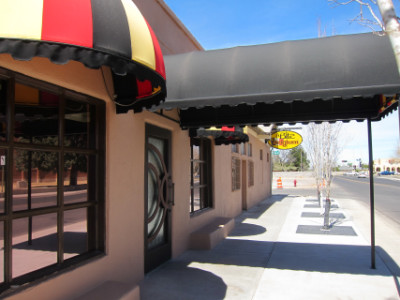 When my dad and uncle were growing up, Belgium was referred to simply as “the old country,” with their grand-maman trying in vain to pass along a working knowledge of the French language to the grand-kids. Another item that seemingly did not get passed on was any tradition of Belgian food in the family. This has led me on somewhat of a quest to find anything that might be a true representation of food from the “old country.”

A Bite of Belgium was my first successful attempt at getting an actual Belgian meal as opposed to novelty items such as chocolate candy or waffles that were Belgian in name only. I will have to say the restaurant was quite impressive, and a large crowd in both the dining room and outdoor patio seemed to agree. The restaurant has a large breakfast and sandwich menu, which has actually expanded since I first dropped in to pick up a menu in 2017.

One thing I like about the breakfasts is that they are not oversized, and the restaurant believes you might actually want to eat lunch somewhere and have enough appetite to enjoy it. The sandwiches I saw at other tables were fairly substantial and appeared to make a good lunch. 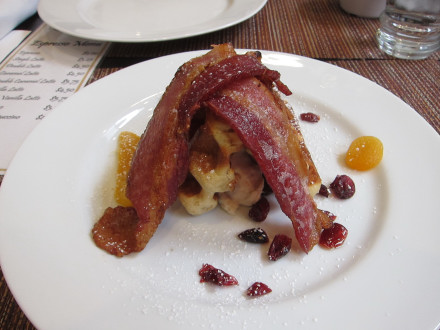 The menu now includes more waffle choices than it did in 2017, and I could see that this was the area I would probably want to explore the most. I have had “Belgian waffles” at other restaurants, but the ones here were obviously the real thing and opened up what seemed to me like a whole new world in waffle enjoyment.

A Bite of Belgium serves Liège style waffles, and to me the waffle itself was the best part of the meal. The Waffles, Bacon, and Cream breakfast serves the waffles with two bacon strips and vanilla cream cheese for a very nice combination of flavors (in addition to fruit and powdered sugar on the plate). The cream cheese turned out to be a little too sweet for the type of breakfast I like, but the good thing here is that you can order the waffles in a variety of ways, including plain with just the powdered sugar. I really enjoyed the waffle and will definitely want to come back for these again.

The bacon was excellent as well–they have a very good quality bacon here.

Desserts
This restaurant has pastries to eat here or for take-home orders as they do at Le Rendez-vous, but the selection at A Bite of Belgium seems small. I have not tried any of the pastries and cannot comment on them. What I can say, though, is that Le Rendez-vous would probably be the place most people would want to go if their primary concern is finding a large selection of items.

Other Comments
For much of my life I have wanted European food to be considered as “normal” in the United States, and for this style of restaurant to be popular places where people would eat all the time. This seems to be the case with A Bite of Belgium–the place was packed and people were obviously enjoying the food (most people were eating sandwiches at the time I went).

A Bite of Belgium is more expensive than the diner or fast food options around town (you can see the prices from the menu I have included). The portions are good, and I do not think many people will complain that they did not get enough food (although these are not the huge portions that some breakfast and lunch restaurants serve).

It is very encouraging that there were very few tables available at A Bite of Belgium. Perhaps this means that in the future it will be easier for other Belgian restaurants to open around the country than it has been up to this point. I do think, though, that restaurants with good quality (such as this one) will do well no matter what type of cuisine they serve. 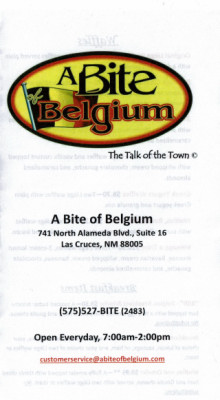 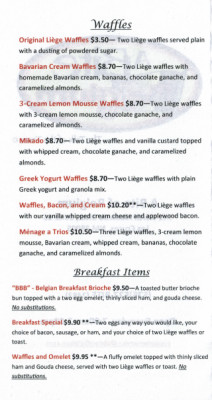 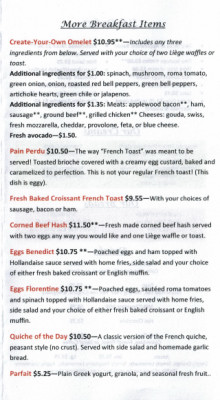 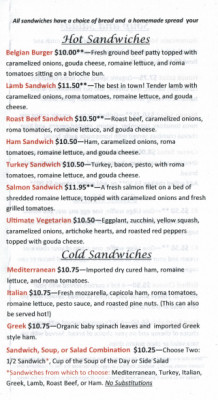 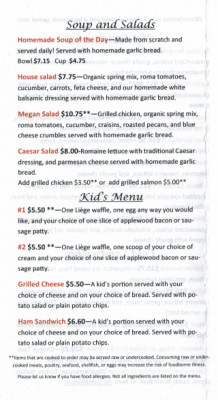 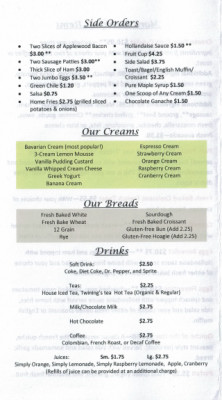 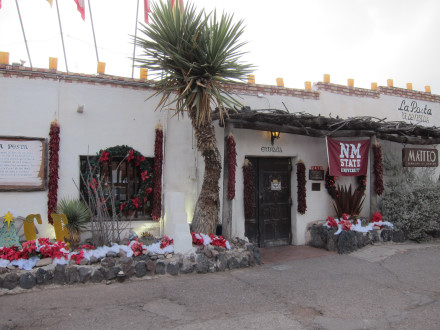 La Posta was founded in 1939, and has been a popular tourist destination ever since. Across from the Mesilla Plaza, the historic building in which it is located is quite interesting (and I recommend a visit to the building whether or not you eat at the restaurant). While inside you can visit the gift shop, see the indoor patio with plants and birds, or simply wander around the building.

La Posta represents a milestone to me, being my first experience with New Mexican food in the southern part of the state. At that time it had authentic spicy New Mexican food, and was almost too hot for me to eat. Since that time, though, my taste buds have become much more accustomed to New Mexico chile, but I also think La Posta has had a substantial decline in its chile heat index. Even those who have never tried New Mexican cuisine before can probably feel safe that the food at La Posta will not be too spicy, but that the flavors found in this type of Mexican food can still be experienced. 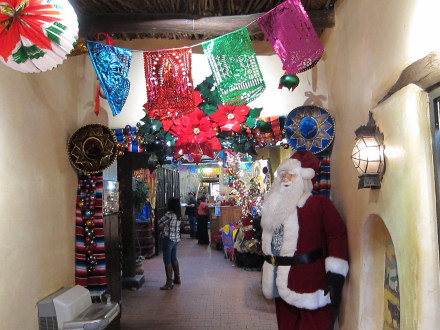 Mrs. Josephine Griggs came from a pioneer Mesilla family, and her daughter Katherine used Mrs. Griggs’ recipes when opening La Posta (other Griggs children founded Griggs Restaurant in El Paso and El Pinto in Albuquerque). The Griggs family recipes include a large number of authentic, delicious New Mexico style dishes, but the various restaurants have had their own way of interpreting the food. I think Peppe’s Restaurant in El Paso (using the Griggs Restaurant recipes) may be the truest to the original cooking style, using local chiles and providing fairly spicy New Mexican food. El Pinto has toned down the food a bit, and as a result has become somewhat of a tourist destination for people who are not that crazy about the hotter varieties of New Mexico chile. La Posta, however, has gone the farthest of the three restaurants in making the food more “touristy” to the way they figure people from outside New Mexico would like it. Judging from the crowds, people do seem to like La Posta. 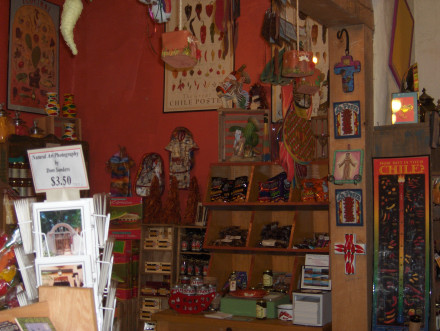 As you enter the building there are some shops, including the La Posta Chile Shop where they sell gifts, bottles of La Posta’s salsa, and as of 2015 there is a cookbook with the restaurant’s recipes. Also here is the Matteo Jewelry Store. 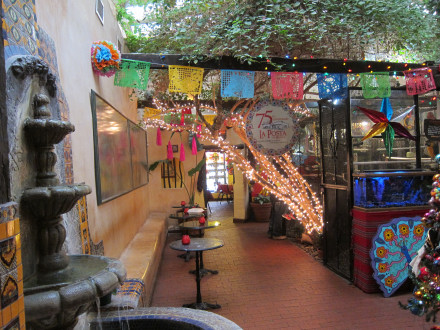 The waiting area at Christmas

In the area where a receptionist will greet you is a large indoor patio with fountains, live birds, and indoor plants which provide a pleasant atmosphere if you have to wait for a table. The area is also festively decorated for any approaching holidays. 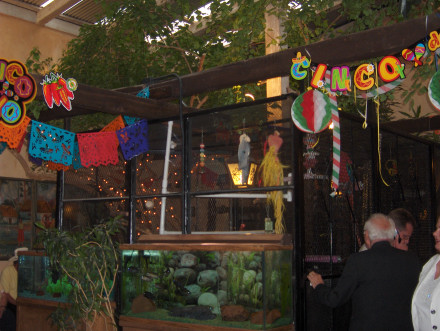 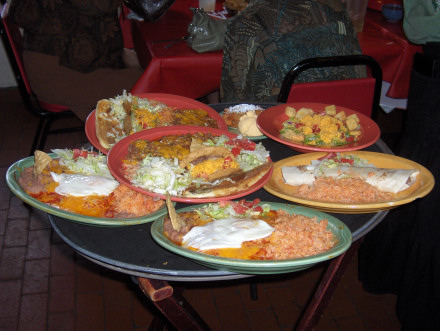 I am impressed that the Chiles Rellenos do not have sauce on top, so diners can get a glimpse of what the New Mexico style relleno should be. However, the egg batter does not seem to be as flavorful as I think it could be, and as I have experienced in other Las Cruces area restaurants. The chile has almost no discernible heat, but being in the heart of chile growing country assures that La Posta will offer fresh and flavorful chiles.

The highlight of the restaurant may be the Green Enchilada (this was also my favorite dish at Griggs Restaurant in El Paso). Abuelita Griggs’ recipe comes through fairly well here, and it does have a little bit of spice. The heat level does not even approach that which is typically known as “New Mexico green chile,” such as is served in Chope’s or Nellie’s. Nevertheless, green chile enchiladas are authentic New Mexican in terms of flavor.

I have not tried the Sopapillas lately, but the ones I saw come out of the kitchen were large and fluffy as they should be. This is something I always remember as one of the special treats at La Posta. 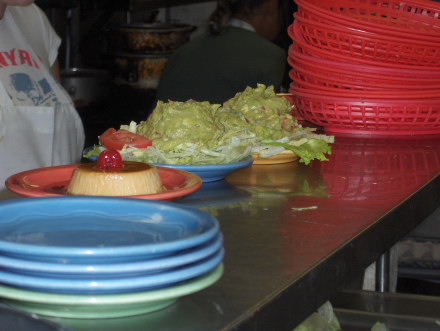 Flan and guacamole spotted in the kitchen

I also like the fact that La Posta uses vegetable oil for all the cooking, including the refried beans (but I don’t know why they don’t serve whole pinto beans instead of refried).

Chips and salsa are one of the better parts of the meal, and I do like the salsa they sell in the gift shop.

Summing It Up
To my own taste, other restaurants in the Las Cruces area serve more satisfying New Mexican food. At La Posta I almost have to rely on the traditionally non-spicy foods, such as the guacamole and sopapillas. I do think, though, that the green enchiladas, with a semi-spicy chile, are probably La Posta’s best dish. What I would suggest ordering is a combination plate with as many different flavors as possible. 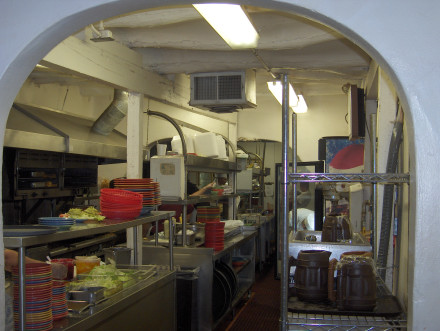 No restaurant in or near Las Cruces can match La Posta’s beautiful old building, charm, or historic setting. Stop by for drinks, dessert, a snack, looking in the gift shop, or just seeing the historic building, even if you do not want to order a meal here. I think it will be worth it. 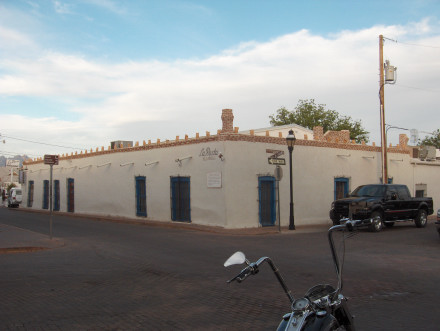 View of La Posta from the Plaza

The town of Mesilla is a well known tourist attraction, and is one which I find very interesting and worthwhile visiting. Most of the restaurants and shops are located on the Plaza, where there is free parking either on the Plaza or not far away. The shops include some that sell local food specialties, such as pecans at the Mesilla Valley Store.