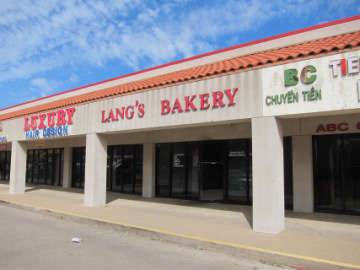 Lang’s Bakery in the shopping center behind Lido

Lang’s is a very small restaurant and bakery located in the same shopping center as Lido, but it seems to build its business on local clientele more than Lido and other restaurants which attract a good number of tourists and occasional visitors. Even so, Lang’s has its own loyal following, and for good reason.

The most popular feature of Lang’s seems to be its bakery, which makes its own Asian specialties as well as bread for the banh mi sandwiches. The display cases have such a wide selection that it is really not easy to make a decision. 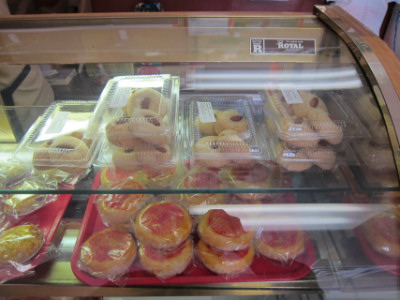 I found some very good Almond Cookies (literally sugar cookies with almond flavoring) that made the most out of the most simple ingredients– flour, butter, and sugar.  They were not super-sweet, but had the right mix of flavors for an Asian style dessert. 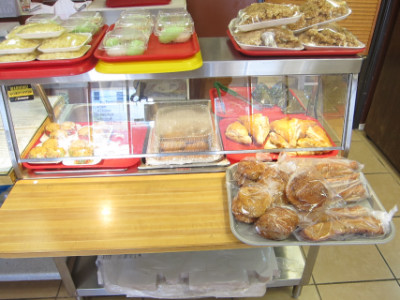 Another display case has cakes and other baked goods that I think change from time to time, but what it all has in common is that it is freshly made. 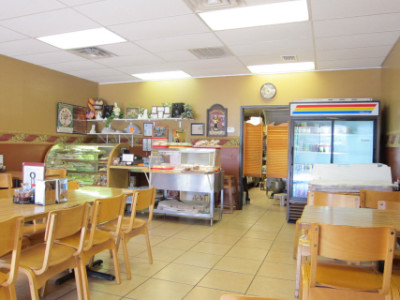 The restaurant has about eight tables

The restaurant serves lunch, and apparently a lot of banh mi sandwiches to go.  The lady at the counter said that some of the items have MSG, but not everything.  The five sections of the menu are (1) Banh Mi Sandwiches, (2) Beverages and Desserts, (3) Rice Plates, (4) Vermicelli and Other Noodle Dishes, and (5) Soups. 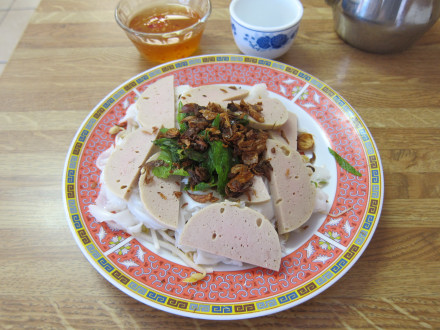 I was talking to the lady about Banh Cuon Tay Ho, the restaurant formerly located a couple of doors down, and she said Lang’s menu item #19 (Banh Uot Cha Lua) was very similar to the rice noodle dish I used to get at the other restaurant.  I was very happy with the one at Lang’s (although it is not exactly the same dish), and this is also one of the dishes that is MSG-free. I will say that the ham and rice sheets did not provide as vibrant a flavor as I find with many Vietnamese dishes, but everything about it was very good (I especially enjoyed the fish sauce that had a more authentic Vietnamese flavor than most).

Drinks
Drinks include Vietnamese coffee, a yogurt ice drink, and smoothies.  I had hot jasmine tea with my meal. 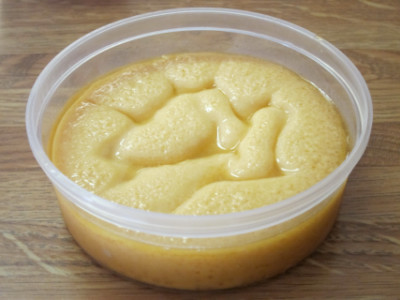 Besides the baked good, there are also several other desserts available including a very good Flan. This is a French styled flan as it would be served in Vietnam, and I thought it was excellent (it was also available at a very good price).

I am happy to report that the Filipino Fusion food truck is now open for business and receiving excellent reviews. It joins Chibugan Restaurant as places in the Oklahoma City metro where Filipino cuisine is available.

The Filipino Fusion Facebook Page lists the locations where the truck can be found. These include the following: 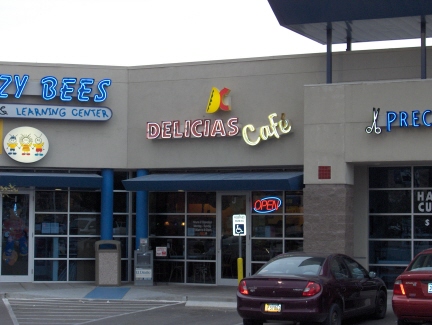 The name Delicias not only refers to the “delights” that can be found on the menu, but also to Delicias, Chihuaha (pictures of which can be seen on the wall of the restaurant). I don’t really know of any special dishes that come from Delicias– this restaurant has the standard menu items found around El Paso. It is interesting, though, that they serve flour gorditas instead of the usual corn ones.

Delicias Café does not seem as if it is trying to win any “Best of the Border” awards for its Mexican food or to attract out of town tourists. Instead, it is a neighborhood restaurant with “comfort food” at cheap prices. This is not necessarily a bad thing, since one thing I like about Delicias is its ability to reproduce the same kind of experience that could be found by walking into any restaurant at random in Ciudad Juarez or other cities in the state of Chihuahua. One thing I have discovered about Chihuahua style restaurants is that enchiladas are usually the last thing I would want to order, being so different from El Paso and New Mexico style enchiladas they hardly seem like the same dish. Most other things, though, can be pretty good when prepared as they are south of the border.

My opinion about Delicias Café is that you have to order the right things to have a truly enjoyable experience. Much of the food seems greasy, and not very good. The few items that I think are particularly good, though, are about as good as any restaurant in El Paso. These, combined with the items I think are almost as good as other restaurants (caldo, chile verde, chile colorado, huevos rancheros, etc.), make Delicias a good neighborhood restaurant for times when I want a casual atmosphere. 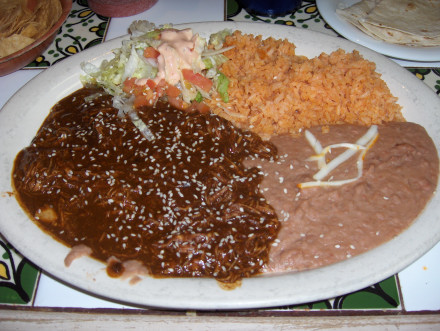 Probably the most impressive dish is the Chicken Mole Dinner. Some may be reluctant to try mole because it is made with chocolate, and this does not sound very much like typical Mexican food. I am fairly confident that many who feel this way have not tried some of the really good versions of the dish, and I agree that the inferior mole is not something I would want. Delicias makes one of the better versions, however, not only because of the sauce but also because of the chicken. Most mole dishes I have seen in El Paso have been the dark brown mole poblano style of the dish, so it is pretty easy to compare them in terms of which is the most flavorful. Carnitas Querétaro and Barrigas both have very good versions, with the one at Delicias Café being very comparable. I would not say that the dish at Delicias was better than the others, but I did like the shredded chicken that follows the traditional Mexican style (although I have also liked the ones at the other restaurants when they have served a chicken breast). The main advantage of Delicias Café is probably the more reasonable cost of the mole. It is hard to beat a deal like the one here.

Chicken Flautas
Chicken Flautas have also been one of the better items. These come with fresh guacamole and sour cream as well as white chicken meat. The chicken meat seemed to be better than average in quality. The liquefied guacamole was certainly not noteworthy by El Paso standards, and the shells were rather greasy, but they still tasted pretty good when everything came together along with the sour cream. 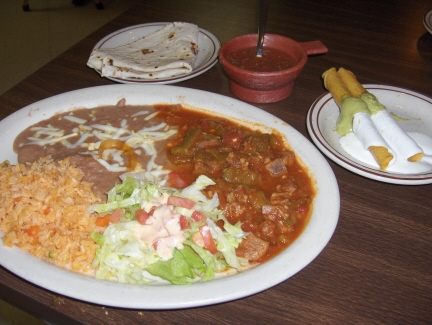 Chile verde with a side order of flautas

Chile Verde was not nearly as spicy as the New Mexico versions, but it was a pretty typical Chihuahua style dish. Whole green chile chunks were mixed in with beef cubes and a mild sauce. While I thought it should have been spicier, the rich flavor went a long way to make up for it. The main disappointment with the dish was the gristly beef that was served. Those who have eaten more than their share of meals at budget restaurants in Mexico, though, as I have, will feel right at home with the type of meat that is served here. 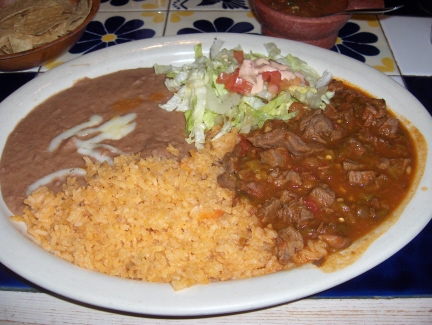 Chile Colorado probably has better meat than the chile verde, but is made with pork. I enjoyed the flavor of the sauce, and I thought this was another good choice for a meal.

Other Items
The Enchilada dinner plates have been unremarkable. I am not sure whether I have tried the green enchiladas, but I was not very impressed with the red ones. I do not know how the newer Las Cruces branch of Delicias Café will compete against some of the best enchiladas found anywhere, but I think people in the City of the Crosses will be happy with some of the other things Delicias has to offer.

The Refried Beans are almost always very greasy. The Rice is a lot better except at those times when it seems to have been sitting around for too long.

Dinners come with a simple but good Salad, as is typical in El Paso Mexican restaurants. This one is much better than most, though, because of the dressing (it did not taste home made but it was very good). 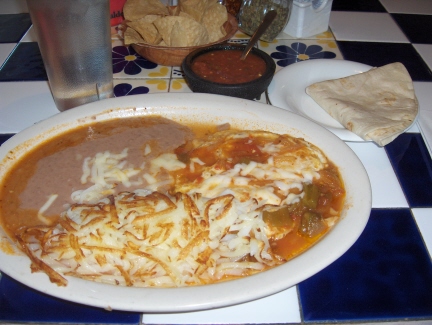 Delicias Café does a good portion of its business at breakfast. The large assortment of breakfast burritos and tacos are popular (pancakes and omelettes are also available). Huevos Rancheros are excellent by just about any standard, although better ones can be found in El Paso. The egg yolks had the right consistency and the green chiles came in large flavorful chunks. The greasy hash browns and flavorless tortilla detracted from the breakfast plate, though. 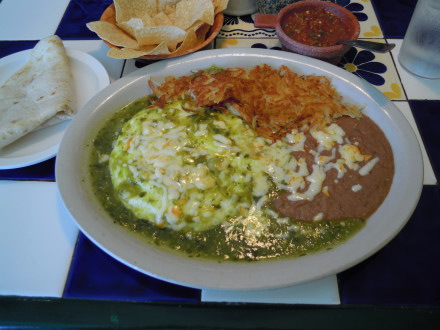 Huevos Delicias are a specialty of the restaurant, and presumably a specialty of Delicias, Mexico. There are two eggs over a quesadilla, topped with tomatillo and serrano green sauce. I thought serving them over a quesadilla was a very nice touch, and in this respect I liked them more than the huevos rancheros. The sauce was equally good, although probably not any better than the sauce on the huevos rancheros. I am sure that all the sauces served are fresh, but it was very noticeable with this particular sauce.

Other breakfast items were not quite as good as the eggs. I was pretty disappointed with the Pancakes.

Drinks
The Horchata was thin and not the best in El Paso.

Closing Comments
While the dinners at Delicias Café have not been quite as good as at other El Paso restaurants, the breakfasts can compete with most other restaurants in the same price range. I definitely think the crowds are bigger at breakfast than at any other time, but it is really fairly busy just about any time I go. The service is good and the restaurant is good, but I am more particular about what I order here than at most Mexican restaurants.

Delicias’ web site highlights the tacos, fajitas, and steak (among other items), and these are likely among the restaurant’s best dishes (but ones that I have not tried).