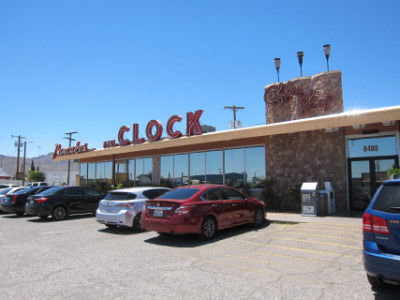 Every once in a while when visiting restaurants I like to return to some of my old favorites, such as New Clock which is located in northeast El Paso a few blocks from where I used to live. Although it has been around as long as I have been in El Paso, it was called “New Clock” back then. To find the “Old” Clock I think you have to go to the Oasis Restaurant at Pershing and Copia which was the inspiration for the restaurant and where the original owner Lyle Dautrich worked before opening what became a chain of Clock Restaurants (the one on Dyer is the only one that is still open). 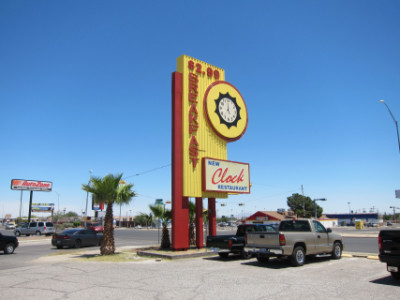 I really do not have any idea how many times I have been to New Clock, but it was enough that I knew I wanted to go back. If the food has changed at all I think it for the better, because I have memories of it being a “greasy spoon” which is really not the case now. An old menu on the wall shows that it was mainly an American family style restaurant with an emphasis on breakfast items. It still has a coffee shop concept, but the Mexican menu has been greatly expanded so that they have a wide choice of items. The Mexican food in particular seems to have lost the greasy taste I experienced before, and I think it is competitive with the best Mexican restaurants in town.

For those who would like a review in a nutshell I will compare it to other coffee shops. Good Luck Cafe, for instance, served a Mexican plate on which I thoroughly enjoyed everything that was served. New Clock, on the other hand, has hits and misses. In my opinion the good items at New Clock are really at a level that I would call some of the best in El Paso (I did not find this at Good Luck Cafe), while some of the items at New Clock are below the standard of Good Luck. I tend to go to restaurants such as New Clock because there are certain things I especially like, while Good Luck Cafe would be a good choice if my main emphasis was variety rather than one specific dish I was craving. 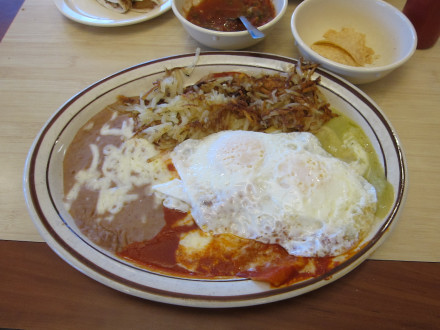 Enchiladas Montadas are a popular dish at New Mexican restaurants, but at the New Clock they are served on the breakfast menu. This is because they have an egg on top and they come with hash browns. The enchiladas are served flat and come with either red or green sauce (or it can be served half and half as I got it). The red part of the enchilada was one of the most flavorful I have ever eaten. In addition to being served flat as in New Mexico, it was spicy like New Mexican food and the flavor was very comparable as well. This is definitely an excellent choice.

I liked the Green Enchilada as well, but not as much as the red. I thought the green sauce was more of a border style with some type of filler, although the green chile itself seemed to be the real deal (and probably came from New Mexico).

The eggs are cooked the way you want and were very good as well. I thought they added to the overall flavor, and were a good way to cut what would have been a very spicy dish.

The Hash Browns were a very big disappointment compared to the last ones I had (at El Camino in Socorro, NM). Granted that I have a limited number of hash brown experiences recently, but I know that the ones at New Clock are really not the best you can find.

The Beans were good but did not seem to be among the best in El Paso. 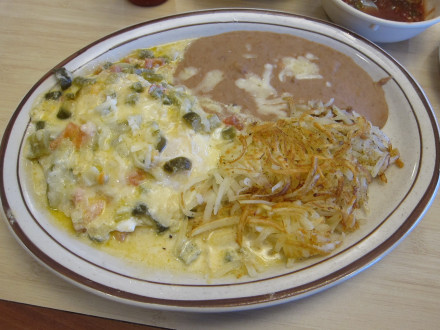 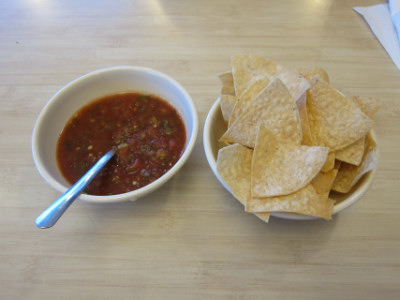 The chips and salsa were so good this influenced me to give New Clock a rating more toward the high end of the scale (thinking that the hash browns were an anomaly). It also made me think that the Mexican food is really what this restaurant does the best.

Other Notes
Although there is a large choice of menu items, I think Mexican food is really what is most popular here. I know that I can really recommend the red enchiladas. I do not know if they purposely serve the food New Mexico style, but the enchiladas were closer to this style than the typical ones served in El Paso (especially because of the spice level).

I believe the breakfast menu is available all day, or at least it was available when I went at lunch time. For some of the items, such as the enchiladas montadas, the only thing that really distinguishes them as a breakfast item are the fact that they are served with hash browns and that there is an egg on top. I think breakfast is their most popular and quite likely their best meal, with the understanding that the breakfast menu is quite varied and many of the items are suitable for other meals.