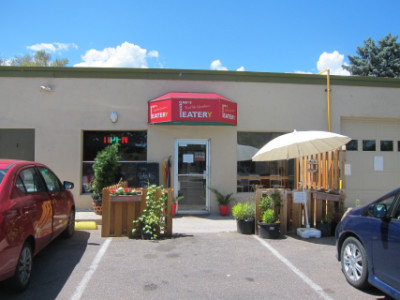 For years I have searched out German food on my travels, although I have yet to make it to Germany to see how it should really taste. I have it on good authority, though, that it would taste like the food at Gabys (from my friend who lived in Germany and accompanied me to the restaurant). I already figured this out from tasting the food, but it is good to know that my instincts are correct, and the best German food is also the most authentic.

This was indeed probably the best German food I have ever had, although I do want to leave it open for other experiences I have had in the past which might resurface in my memory of some special dishes. One thing about Gabys is that it is not trying to prepare over-the-top special occasion dishes, but I would call it everyday food that becomes very special because of the flavor and the way it is prepared.

I assume it was Gaby who served us, although she was a little busy and I did not get to chat with her very much. I did learn that the restaurant had been open for a couple of years, and that they have daily specials which make the menu a little more interesting if you are a frequent visitor. In the short time it has been open Gabys has become probably the highest rated German restaurant in Denver on Yelp, leading me to think that the on-line reviews of Denver restaurants are some of the more trustworthy ones. I honestly would not have found this place without the help of Yelp. 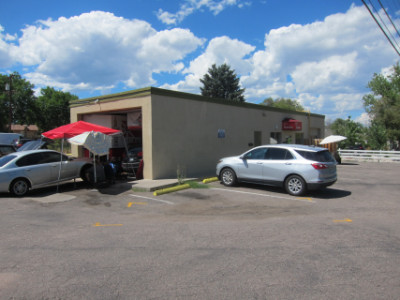 There is an auto repair shop in the same building which initially made me think the two were connected, but this was not the case. The restaurant itself is a little larger than it looks from the outside, but it is a small place with perhaps twelve tables and apparently with Gaby doing all of the cooking. Actually my favorite ethnic restaurants are usually ones where there is only one cook, or at least that you know the food will be the same every time you go. I cannot guarantee that Gabys is this way, but if the Yelp reviews are to be believed then I have every confidence that it is. 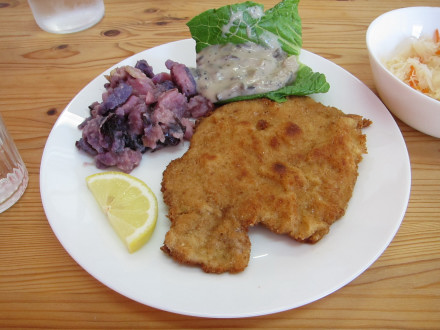 Schnitzel with potato salad and mushroom gravy on the side

Every German restaurant seems to have Schnitzel, but they are not all equal. I do think, though, that almost every restaurant I have tried does a good job with the schnitzel, and usually it is difficult to say that one is really better than the other. This is the reason I was surprised to find that at Gabys, I really can say that I think think this is a better schnitzel than others I have tried. The only way I can describe it is that in addition to having top quality meat, the flavor and freshness make it stand out so that this really becomes the standard by which to judge the others.

The difference in flavor seems to be mainly because of the breading. Gabys serves the schnitzel the traditional way with a lemon, but there is a serving of mushroom gravy on the side so that if you wish you can make Jagerschnitzel out of it. Normally I would jump at the chance to add the gravy, and I thought it was excellent, but I really enjoyed being able to eat this schnitzel both ways and enjoying both of them.

This was a very interesting Potato Salad because it was made with blue potatoes. It did not seem as if the blue potatoes had a flavor that was very different from regular potatoes, except that it had a flavor (I would describe most white potatoes as being without much flavor, making it almost a requirement to add butter and salt). I believe the potato salad had all the seasoning that any other good version would have, but it just seemed as if the potatoes were exceptionally good (and of course I have to say that the seasoning was very good as well). 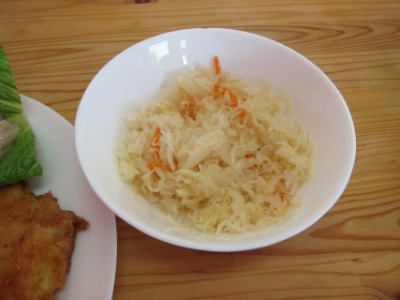 I ordered Sauerkraut on the side because it did not come on the plate, and I wanted to try it. The plate really had a sufficient amount of food, and I would have been satisfied with that alone. The sauerkraut had a very good flavor, but the potato salad was so exceptional that I think Gaby made a good choice by offering this as the side dish on the plate. 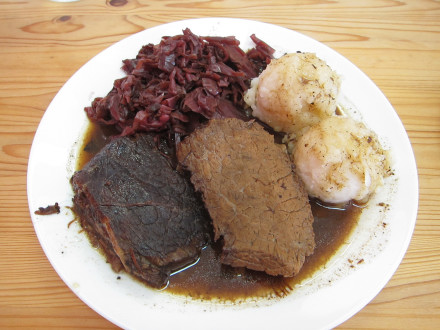 For the Sauerbraten I tried a sample but I got a very good idea of its flavor. This is a marinated pot roast with very moist and flavorful meat. I have had sauerbraten before in other restaurants but this one stood out because of the flavor. It is not often that I find food that I consider to be fine dining at prices that are as affordable as at Gabys, and this is definitely a dish that I would consider for it (although there were other dishes on the menu that seemed to be equally upscale).

Another consideration for trying the sauerbraten is that it is not served at many German restaurants in the United States, and therefore is a special treat at Gabys (although the way the schnitzel was prepared made it a special treat for me as well).

This Red Cabbage was a special treat as well because of the fact that I think Gaby is more skillful than most in the wine/vinegar component of it, so that it still has a good flavor but the vinegar flavor is not as strong. 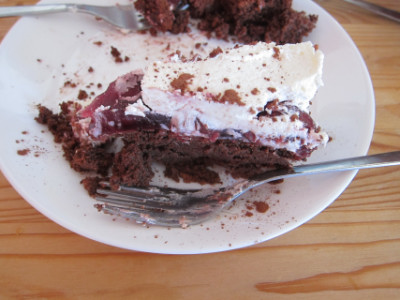 Half of an order of black forest cake

There are several dessert choices including Black Forest, which had all the elements I expected in this pastry. The flavor was excellent, but in addition the freshness was at a higher level than I typically find at restaurants.

Other Comments
The restaurant is small but there were several empty tables when I went for lunch on a weekday. I imagine there are times when there is a waiting time for a table, but the way the food is prepared means that any meal is likely to involve a wait that is longer than at most restaurants. I believe they take reservations for large parties, though, which may speed things up for some people.

I did not see that they serve beer or alcohol but I did not inquire about this. Perhaps this will come in the future but right now I think the emphasis is on serving food that in itself is not only very good but is one of the more memorable experiences I have had in a restaurant.

My bill was very high because as far as I knew I was only going to make one visit and I wanted to try as many items as possible (sauerkraut, black forest, etc.). I do not regret ordering these, but I did think that if you just order one of the plates on the menu and skip some of the extras, you will have a very satisfying meal at a price that would be comparable with many “ordinary” restaurants. (To me Gabys is a place which I consider “extraordinary” with the accompanying temptation to keep ordering extra items, but I did want to make this one point about the size and the quality of the servings).

Super Star Asian Cuisine 2200 W. Alameda Ave. Denver, CO (303) 727-9889 In the Chinese culture the number 8 is considered one of the luckiest numbers, as evidenced by the fact that the parking lots in the Oklahoma City Asian … Continue reading →