Inni Heart (Closed) 1731 Montana Ave. El Paso, TX Inni Heart is a “New American” restaurant with an emphasis on freshness and quality (I am old enough to remember when this was the “regular American” food with the newcomer being … Continue reading → 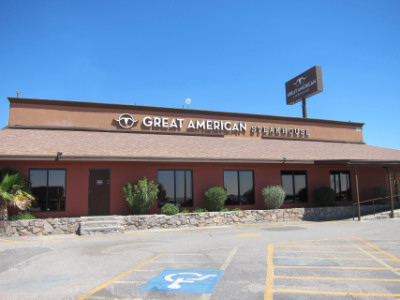 Great American is a mini-chain of steak restaurants that also qualifies as an El Paso institution because it has been here for so long. For years I thought the steak was not quite as good as Cattleman’s in Fabens, although the sides were better. This has changed because Cattleman’s has gone through some changes lately and because of some experiences I have had at Great American on Mesa Hills that gave me a better opinion of their steak. I now believe that both restaurants have good cuts of steak and others that are less impressive. For sides, it is hard to beat the cole slaw at Great American.

Although I only have one recent experience at the Vinton Great American (which has a postal address of Anthony, TX), I have also had a number of experiences at various locations throughout El Paso over the years. This review is only for the Vinton restaurant, although I think all of the restaurants serve pretty much the same food. 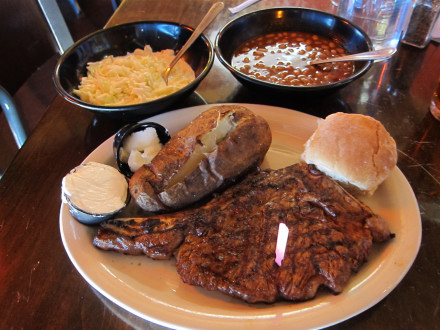 Although the New York Steak was a little disappointing in some ways, this quality of steak is still a special treat. It seems that almost no steak tastes the same as I remember when I was younger, although this one comes close. It had a very good flavor (which is the reason I like to order the New York cut) and they cooked it very well.

The disappointing part was that it was gristly in part of the steak, although part of it was very good. I think this is a characteristic of the cut, although I do not eat enough steak to be an expert on the different cuts.

I do not think the steaks here are grass fed or have the other special characteristics I sometimes find in Oklahoma City, although the prices at Great American are relatively affordable and the steak is a good bargain.

Side Dishes
The Cole Slaw has been my favorite dish at Great American since I first tried it years ago. The most noticeable characteristic of it is the pineapple flavor, although they keep the sweetness to just the right level. I made a special note that there was at least one chunk of pineapple in every bite I took at the Vinton restaurant.

The Baked Potato was very good, although it is still not like the ones I remember when I was younger and living in Austin (I don’t know why they were so good there, but like all food I judge everything by the best examples I have found).

The Beans were disappointing to me after having remembered them being so good in the past. I do not think they have changed, but my tastes have changed so that I do do not like them as spicy as they are at Great American. I have been on a barbecue kick lately, and my favorite beans are ones you typically find in barbecue restaurants. The people at Great American told me they put Tabasco sauce in the beans, but personally I think they put too much.

Additional Comments
I have experienced better cuts of steak at Great American than the New York, but I just wanted to give this one a try. It was not bad, and had a great flavor in spite of the gristle in parts of it.

I do not know why, but the staff in Vinton seem to be the most friendly of any of the Great American Restaurants, and this was true even about 20 years ago when I made my first visit. I do not know if this translates into better food, but I do think they try to do what they can to make your visit enjoyable.

I know from past experiences that Great American has better steaks than the New York, and the Mesa Hills location even had a Wagyu style steak which I believe is still available at all the locations. Something that is this much more expensive would obviously give a better meal, but I believe some less expensive steaks such as the filet would also be a good choice. For the rating of this restaurant, though, I have to base it on what I have actually tried (and I would expect it to go up with some other steaks).