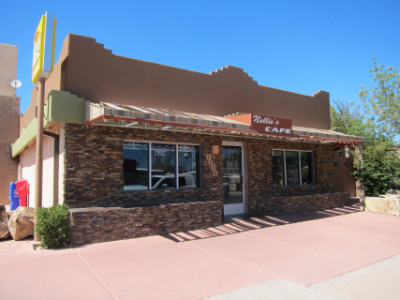 This long time family run restaurant has the distinction of being the first New Mexican restaurant I tried in Las Cruces (other than La Posta in Mesilla, a suburb of the city although I think technically Mesilla was the original settlement and Las Cruces is the “suburb”). Nellie’s was the favorite of my relatives and the one we headed to first when we were in the City of the Crosses. From this time in the mid 1970’s until the 2000’s I never noticed a change in the quality of Nellie’s, and it has always been as good as I remember from the first time I ate here.

The only thing that has changed, though, has been the hours (and of course the prices have gone up over the years). They no longer have dinner hours, and now close at 3:00 p.m.  While not a change from the old days, they are also closed from Christmas until about the third week in January, and again for a vacation in the summer. I either read or was told that this is the way they have been able to keep this family owned business alive for so long without facing burnout and having to close.

This is the restaurant where I developed a great love for the sopapilla compuesta, and this is my favorite dish here. Really, though, everything is good (a friend of mine tells me they have the best huevos rancheros ever).

Nellie’s has always been my idea of what southern New Mexican style food should be. The red chile has been my longtime favorite here, but others have told me the green chile is best. Because of some of my more recent visits where I have ordered both red and green chile I am now more open to the idea that green chile really is the best one, and in fact I am convinced that this is one of the best green chiles in New Mexico. At times the green chile has in fact been the more impressive of the two, but I go back to the thinking that different chile harvests can yield different flavors and heat components of each chile, and for many people (with me being increasingly in this category) it is best to get both and enjoy eating both of them.

Nellie’s is also one of my candidates for having the best red chile in New Mexico, although I think it is more accurate to say it is one of the best in southern New Mexico. I notice a difference between northern and southern New Mexican food, but I do not have a good understanding of the reason for these differences or exactly what the differences are in the way they prepare the food. My feeling is that if you are in Las Cruces you might as well enjoy the best of what is available, and Nellie’s clearly has some of the best. For the green chile, though, this may also be some of the best that is served anywhere in the state. 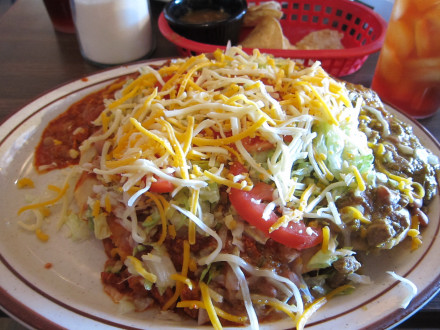 The Sopapilla Compuesta is my favorite dish, and I am very glad I can go back and get the same dish I have enjoyed over the years. This dish is related to the stuffed sopapilla, but the beans, meat, lettuce, cheese, and tomato are put on top of the sopapilla, along with your preference of chile (red or green). Over the years I have enjoyed the meatless version as much as the one with meat. Either way, I have usually ordered it with the red sauce, and have always thought this was a good choice. The one pictured above was “Christmas” (with both red and green sauce)–I am increasingly thinking this is the best choice in which I can still get the red chile that I love so much but where the green often surprises me with an additional flavor treat. 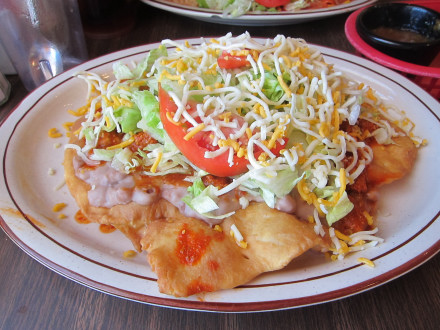 The Sopapilla Compuesta with Red Sauce pictured above looks a little different and not just because of the sauce (it seemed to have less cheese and more sopapilla). There are other variables such as the crispiness of the sopapilla but this is the way it is at Nellie’s–the food is home made style and there are slight differences from one visit to the next.

Both photos are of regular orders, but you can also get a smaller one (that as of 2022 costs a dollar less). If you do not specify then the large one comes by default–this is the one I prefer because of my infrequent visits to Nellie’s and my wanting to get as much of a good thing as my appetite will allow while I am here.

I think New Mexico sopapillas in general are not as sweet as the dessert sopapillas served in many parts of the country, but for sure the giant one made for the compuesta dish may be better thought of as a bread (I think similar to Indian fry bread). It is the base flavor which provides a contrast to the beans, chile, cheese, lettuce, tomato, and meat.

There is a good view of the kitchen from the dining room/cash register area, and it is apparent how each dish is individually prepared and that there is no assembly line production here. I think the chile is made in large batches, but the rest of it is prepared when ordered. 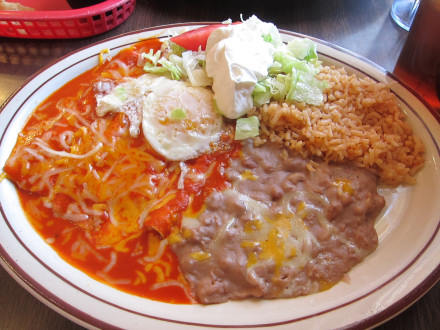 Red Enchiladas are also excellent, and I always like to order them stacked. Because they do not come with blue corn tortillas they do not rise to the level that I would put the ones in northern New Mexico. The chile is quite good and is one of the best I have found in the Las Cruces area.

The default here is that they serve rolled enchiladas. You can ask for them to be stacked but I tend to forget because of the normal long periods of time between my visits here. Theoretically both should taste the same, but I do not think this is the case. I would say that the stacked ones tend to have more chile (because the cooks try to cover the top of the enchiladas completely) while the rolled ones have more cheese (this is put on the inside of rolled ones while stacked ones only have cheese on top). It is a little depressing that these are the types of questions I ponder, but hopefully it will brighten someone’s day by knowing which type of enchilada to order.

The egg here is mostly for flavor because I do not think the red chile is spicy enough that you would need the egg for its mouth soothing properties. You can also get sour cream with the enchiladas if you desire.

I should note that the Beans seem to have the perfect texture and lack the greasiness I find in many restaurants. I think this is a reason they go so well on items such as the sopapilla compuesta, or as a side on dishes such as the enchiladas. 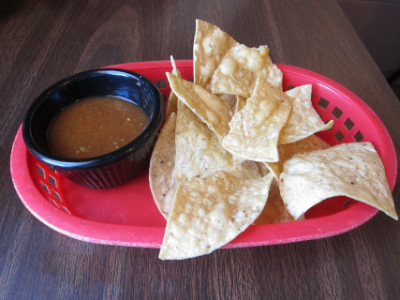 Another item for which Nellie’s is famous is the Salsa. It is spicy, flavorful, and fresh. I have bought some to take home several times, and this is something I would suggest if you have the opportunity.

Nellie’s also sells its red and green chile in take-home containers. I found out that they call all of these “salsa,” with the red chile being salsa roja, the green being salsa verde, and the salsa served with chips being salsa regular. This sheds some light, though, on the fact that there is some confusion between the term chile (which I and others tend to use) and salsa (which is the term most restaurants in El Paso and Las Cruces tend to use).

Closing Comments
Anyone who remembers restaurants from the 1970’s will probably know that many places placed an emphasis on utility rather than decor (unless it was a fine dining restaurant). Nellie’s, as a local hangout, provided all the tables and booths that could fit into a small space, and thus tried to avoid exorbitant waiting times for a table. Post-pandemic there are fewer tables with more space between each one, so waiting time might be more of an issue (although I did not experience it when I went).

Keeping the same food and the same traditions they had in the 1970’s when I first tried it is what makes it great, but there are some things to consider which some may see as drawbacks to eating here:

Nellie’s is cash only (they have an ATM machine if you need it). I think the prices are pretty decent, and this is probably a result of their “cash only” policy.

Note from Aug. 2019: Nellie’s was closed from Sunday August 4 until Friday August 16 (as reported by Yelp). This gives a general indication of when they take their summer vacation each year. 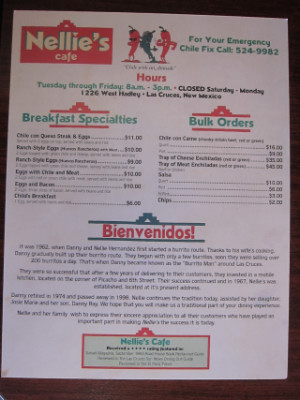 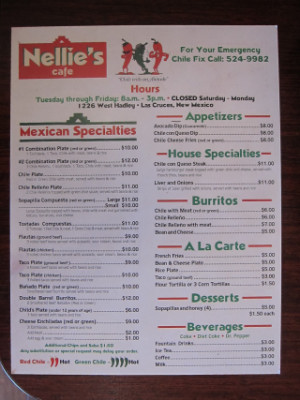