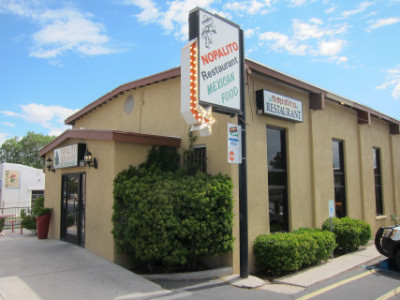 There are two Nopalito Restaurants in Las Cruces, and I have been going to the original on Mesquite Street for just about as long as I have been in the area (since sometime after its opening in 1964 but I am not revealing the exact date!). The warmed green chile salsa seems to be its claim to fame locally, but I believe some of the menu items are quite noteworthy as well..

On my most recent recent visits I have concluded that the red enchiladas are on par with those in northern New Mexico, except for the fact that the ones here do not come with blue corn tortillas. I do not have any recent experiences with the green enchiladas, but the green chile that has been served here has been on par with the best in southern New Mexico (which is where I think the best green chile statewide is to be found).

On a previous review I noted that the restaurant had 1960’s style booths and tables, which I enjoy much more than many of the modern styles of decor. In 2021 they still had the booths but they seemed to be new and I am fairly certain that their old booths have been replaced. Much seems to have changed during 2020 during the pandemic, and on my latest visit every other booth was marked off as a space where customers were not allowed to sit. They have compensated for it somewhat by having an outdoor patio area. I do not know if the patio is new but I never noticed it or knew about it before. There are only three or four tables, and the two largest tables are covered. 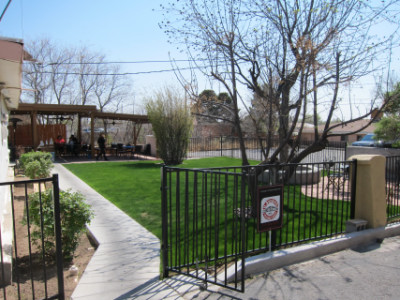 Nopalito has also resorted to placing a sign in front alerting potential customers that the restaurant is open. This is not the case for all local restaurants as of April 2021–Chope’s is one place I found out has still not reopened (although I think it will at some point). 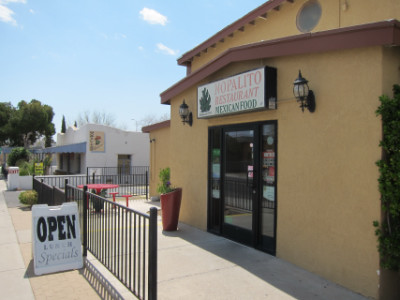 Nopalito is open after the pandemic 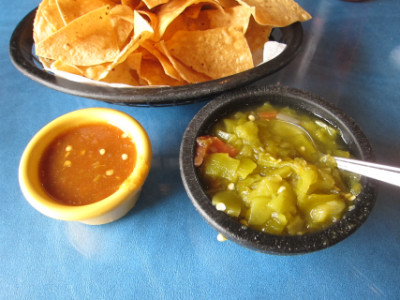 The green chile Salsa here is renowned in the local population and also with just about anyone who has visited the restaurant over the years. This is a mild chile (by New Mexico standards) made with fresh cut chile and heated just before serving for a lasting memory that I have had since my first visit here. The smaller bowl of red salsa is more spicy, but I think the green one has the edge on flavor. Salsa is usually an appetizer but here I find myself continuing to eat it throughout the meal until it is totally consumed (it is a good thing that the chips are worthy of such as good salsa as well).

The Chips are fresh and thick with an excellent flavor, and I have found this to be one of the best parts of the meal. 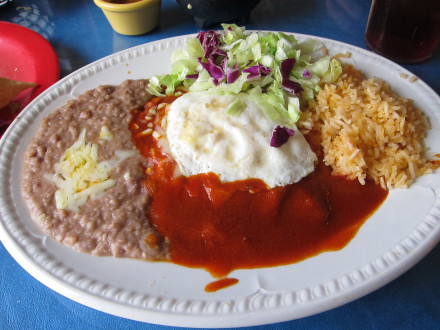 Some of the best red enchiladas in New Mexico

The Red Enchiladas are ones that I would rate as among the best in New Mexico, at least in terms of the chile. I think this chile has the minimum amount of additives for a true chile flavor, and Nopalito left me with one of the most pleasant chile aftertastes in my mouth that I have ever experienced. They use regular tortillas instead of blue corn (as is the custom in Las Cruces), but the chile is so good it really does not matter.

Besides the egg there is also a choice of beef, chicken, or sour cream if you want something other than plain cheese enchiladas. I would say, though, that the cheese is among the best as well as the chile, so personally I would hesitate to add much else to it.

The egg shown in the photo was overcooked with regard to the way I ordered it, but this was before the pandemic. At present (2021) I really find the restaurant to be top notch in everything they prepare, and they are diligently making an effort to bring back their customer base after many have been hesitant to go out to eat. 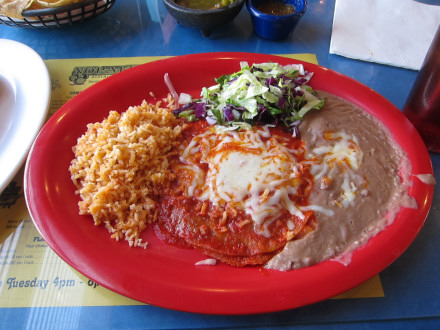 Red enchiladas without the egg

I really should rate the red chile as five on the one-to-five chile scale I have set up, and I think it will be too spicy for some. I wanted to distinguish it, though, from the super hot chile found at some old style restaurants such as Pepper Pot in Hatch. There is a time in my chile experience that I like the spicy stuff, but I think Nopalito has the same good flavor without some of the possible side effects of extremely spicy food. An egg is typically used to cut some of the heat, but at Nopalito I think you get red chile that is just spicy enough to enjoy the flavor without needing to put an egg on top.

The Beans and Rice are excellent as side dishes, but usually I think the beans are best. On my visit in 2021, though, I found the rice to be exceptionally good, and the better of the two side dishes.

The enchiladas and other dishes have a side salad that looks like cole slaw without the sauce. This is a garnish and does not have to be eaten, but I think it is much better than at restaurants where they only serve lettuce. 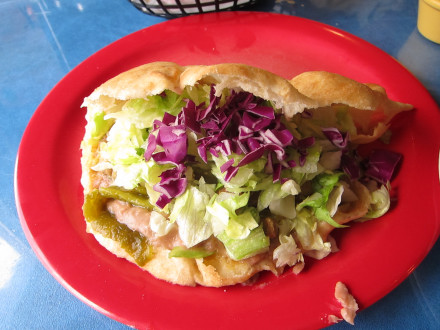 The Stuffed Sopapilla is served as an individual item, and would be equivalent to the small order at Nellie’s. Even though it was small it was overkill with an order of enchiladas, but I enjoyed the flavors.

The stuffed sopapilla that is pictured came with green chile, which I did not think was quite comparable to the red, but things have changed after the restaurant’s reopening and now I think the green is really worth a try. 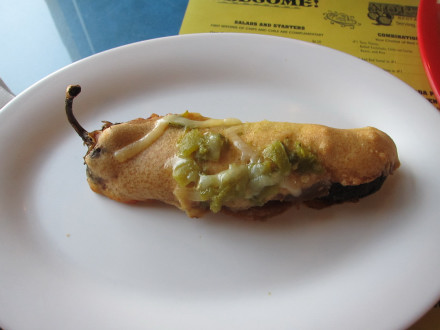 Chile relleno served as a side dish

This Chile Relleno (served in 2021 after the restaurant’s reopening) was very notable both for the chile itself and the green chile on top–both were among the best I have ever experienced. If that were not enough, the batter, although not light and fluffy like the one at Chope’s, had what I thought was a flavor that was comparable. The cheese was melted at just the right point, and everything was quite impressive. They gave me a knife to cut the relleno and the batter, and I needed it, but as far as I was concerned this chile relleno was flawless–just prepared a little differently than the one at Chope’s (which as I mentioned is still closed as of April 2021).

Other Dishes
When I tried the Gorditas I found them less exciting that other items, but I need to have a more recent experience to give a more thorough review.

Other Notes
South of the border and modern style Mexican restaurants are proliferating in Las Cruces, but Nopalito is one of the best places to go for traditional New Mexican style food. Hatch chiles have recently come into popularity throughout the country, but they have been a staple of Las Cruces cuisine all along. It is not uncommon, though, for restaurants to source their chiles south of Las Cruces rather than north (from the Hatch Valley), and everyone tries to get the best chiles they can find. Based on my taste test, I would say that Nopalito has found some of the best chiles.

The green chile salsa at Nopalito is probably of the restaurant’s main claim to fame, and is a little extra you get here that is not at the other restaurants (although I think the salsa amounts to more than just “a little extra”).

The other location of Nopalito is at 2605 Missouri Street, and it is also open seven days a week.

Most Recent Visit: Apr. 2, 2021
Number of Visits: 10+
Best Items: Red Enchiladas, Chile Relleno, Rice, Beans, Chips, Salsa (and probably the green enchiladas but I have not tried them recently)