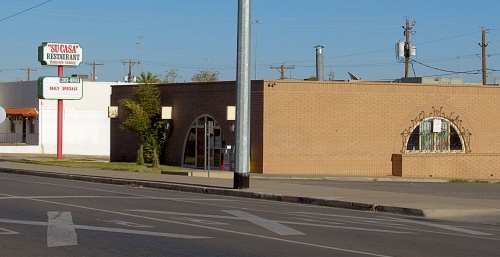 Any list of classic El Paso restaurants would have to include Su Casa, a neighborhood hangout that has been operating at the same place for longer than I can remember. A friend reminded me that Arnold’s, another classic El Paso eatery, was at this location before Su Casa opened. While Arnold’s may have already established the popularity of the location, Su Casa has kept people coming back even if their residences or jobs have since moved out of the neighborhood. Having a central meeting place is part of the reason, but people have a hard time finding the same food anywhere else.

Su Casa seems to have escaped the notice of most tourists, but the restaurant is already so crowded for lunch I doubt that one of the priorities of the owners is to advertise in the local travel guides to attract new customers. Instead, word of mouth seems to bring most people who are not already regular customers. I have a hard time choosing any one Mexican restaurant that I would advise out of town travelers to visit if they have only one meal in El Paso, but Su Casa is certainly one that would be on the short list. The food here typifies the classic El Paso style of Mexican food, and is of consistently good quality no matter what you order from the menu. The combination plates are good at Su Casa, as are many of the single item plates. 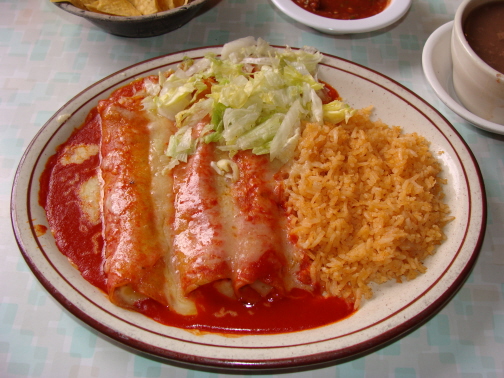 For me one of the best tests of El Paso style Mexican food is the Red Enchilada, and the one at Su Casa is certainly one of the best (this is the opinion of myself as well as several of my friends). The one here has a good spiciness, and the cheese provides quite a good flavor. It can sometimes be skimpy on the sauce, but if you need more sauce you can ask for it. These are an El Paso variation of the New Mexico style enchiladas, which are generally slightly more spicy than their borderland cousins. The deep red color with the accompanying flavor, though, is something they have in common. 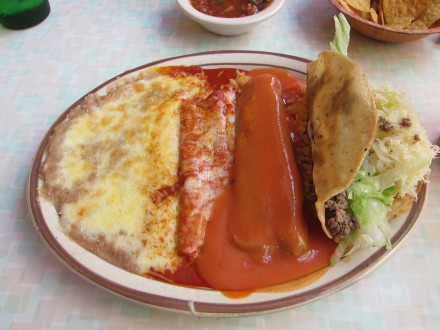 Combination No. 2 with beans, enchilada, chile relleno, and taco

There are several combination plates on the menu that will provide a sample of different items. I would recommend that any one ordered include a red enchilada (most of them have an enchilada, and you can choose either red or green). Combination No. 2, which includes a beef taco, rice, chile relleno, enchilada, and beans is the one that I would say gives the best variety of the restaurant’s best items. This might be nick-named the “classic” plate because it includes all the items I traditionally find at El Paso restaurants that serve a “Mexican Plate.”

The only difference between this enchilada and the one on the enchilada plate is that it might not have as much sauce, but you can ask for more if you want it.

The Beef Tacos are among the most enjoyable anywhere, made with ground beef and topped with Mexican cheese. They are not spicy, though, which is why I like to get them in combination with other items. What is really noticeable here is the way they are cooked so that they are neither too crispy nor too greasy.

The Chile Relleno is served with a fairly mild sauce and a very doughy crust that distinguishes it from the New Mexico version. The chile itself and the cheese inside, though, are very similar to ones I have had in Las Cruces and other places throughout the Land of Enchantment. I was especially impressed by the way the cheese melts to just the right consistency for maximum enjoyment of this dish. 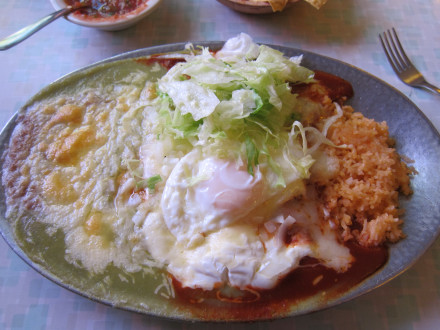 Tri-Color Enchiladas are technically an enchilada plate rather than a combination plate, but it is one of my favorite dishes here that includes a combination of different items. Known as the “Mexican Flag” in some restaurants, the red, green, and white represent the colors of the flag. I think the green chile at Su Casa is one of the best in El Paso, although the red is really my go-to choice. The “white” enchilada is actually a red one with sour cream on top, so you are in effect getting two red enchiladas and one green one. They tend to spread the sour cream over all three enchiladas on the plate, but to me this is a good thing and you still end up with the three distinct flavors. 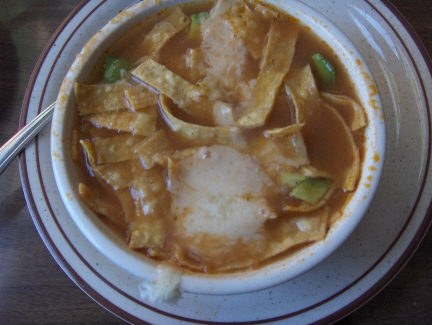 The Tortilla Soup is well spiced with excellent cheese. If this were going to be the main part of the meal, though, I would prefer the caldo tlalpeño at Café Mayapán that also contains avocado and a whole chipotle chile. Su Casa serves the soup in either a whole order, which would constitute a pretty substantial meal, or a half order (I really prefer the half order and having it as an appetizer).

The Refried Beans, topped with a generous amount of cheese, are delicious when eaten on chips. Traditional wisdom seems to be that beans made with lard have a better flavor, but the ones at Su Casa made with vegetable oil seem to disprove this theory. 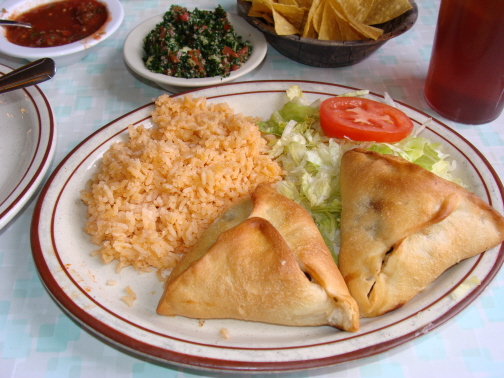 I think Su Casa should be known as much for its Middle Eastern food as for the Mexican menu. The Spinach Pies, made from scratch in the owner’s home, have the best flavor I have tasted anywhere, but suffer from the fact that they are kept frozen and then microwaved when you order them. The ones here are probably not like you would find in Lebanon, but they are better than the ones I have tried in the city’s Middle Eastern restaurants. Even though the crust shows some signs of being microwaved, the inside filling is fresh and moist, with a rich Middle Eastern flavor. For me, this is one of the best lunch plates served at Su Casa. 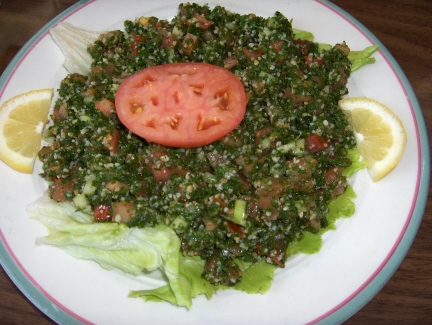 The Tabouli is made fresh, and has a well deserved reputation as one of Su Casa’s most popular dishes. The light sauce brings out the true flavor of the vegetables that I find typical of good quality Middle Eastern food. My respect for the tabouli at Su Casa has increased over the years as I have tried other versions in El Paso and other cities that seemed too have to much or too little of certain ingredients, while the one at Su Casa has just the right balance of its various components. Lebanese food is a real passion of the owners, and it definitely shows in the tabouli and other dishes that are served.

Before and After the Main Meal 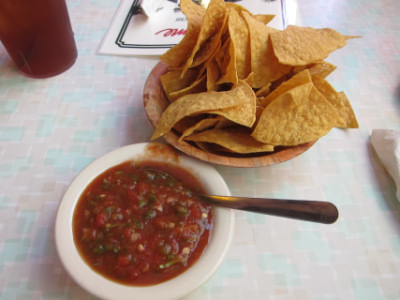 The Salsa is not the spiciest in El Paso, but may have the freshest ingredients. The owners’ Middle Eastern heritage comes through a little bit in the mixture of ingredients that come together to provide one of the most complex flavors of any salsa in the city. 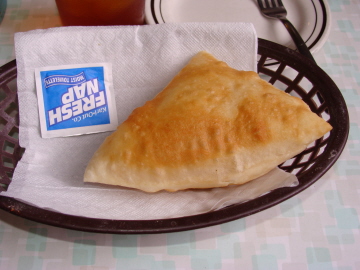 Complimentary Sopaipillas are served after every meal, and are some of the tastiest around. This one, like many served in El Paso, are thinner than the New Mexico version.

Things to Know
One feature I really like is that just about every plate is available in a half order, and many times the half order is large enough for a meal (although a half order of the soups or salads would not fill me up). Several of the combination plates come in half orders with fewer main dishes, but you still get the beans, rice, and sopaipillas.

There are daily specials throughout the work week where a regular plate is served at a discounted price, but only one plate is offered as a special each day (the specials are the same every week).

Even though my rating has varied somewhat over time, one thing that has never changed is that the red enchiladas, tacos, and salsa are in the top tier of El Paso style Mexican restaurants. If customers get these (as well as some other items with which I may be less familiar) I think they will have some of the best food El Paso has to offer.

Almost everyone who is a regular will say that one of the attractions is the excellent service. Su Casa is a neighborhood, family style restaurant, and once you go you will likely be remembered from then on. There is a higher likelihood of running into my friends here than at any other restaurant in the city. Everything seems to come together to make it feel like “your home” (su casa).