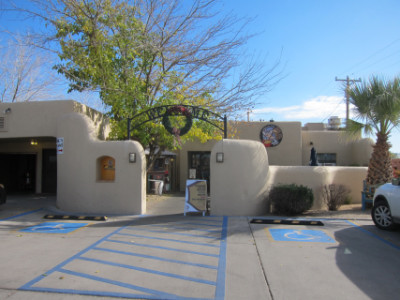 Andele’s Dog House has an architecture that blends in well with the other buildings in historic Mesilla, New Mexico, but it is a restaurant that is easy to miss if you are not looking for it. The original Andele Restaurant,  which sits across the street to the north, fronts on the the main highway going to Las Cruces, and will probably be easier to spot. Parking is available at either Andele restaurant.

The Dog House has the same menu as Andele except that it has added several Mexican style hot dogs. Other features here include a drive-through window and a dog friendly outdoor patio. The patio is actually the bulk of the restaurant, with only a few tables located in the indoor portion of the restaurant (Andele Restaurant is quite large and all of its seating is indoors). With the scant number of days that rain or cold is an issue in the Las Cruces area, the patio is almost always well used. I happened to go on a day that passes for cold here, and the fire pot in the middle of the patio made it quite comfortable. I probably would not want to sit here if the temperature were at or below freezing. 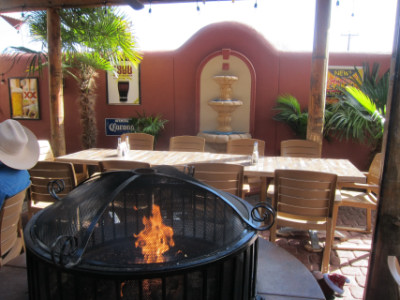 Outdoor covered patio with a heater during cold weather

The restaurant is aptly named because its patio is dog friendly. Of course the real reason for its name is that it serves several varieties of hot dogs (that is, that I believe the hot dog itself is the same in all of them but the toppings are different).

The hot dogs are part of the “Mexican” part of the menu (and are not available across the street in the big restaurant, but everything else on the menu is the same at both places). On a previous visit to the regular Andele Restaurant I had what I believed to be its specialty–tacos al carbon. The other part of the menu, though, is New Mexican cuisine including local style enchiladas and chile rellenos. 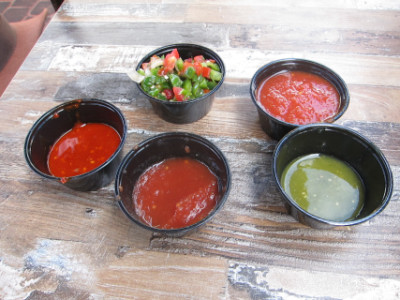 Salsas that you serve yourself from the salsa bar

The two Andele restaurants have salsa bars where you fill a bucket with as many chips as you want and fill cups with as many of the salsa varieties as you wish. I got most of the varieties they had but passed on some of them. The chips were as good as anywhere around this area, so I ended up eating most of the bucket I had filled. On the salsa I thought their “regular” salsa was the best, while the others gave an interesting variety that you do not get at most restaurants. None of the salsas were super spicy like the ones at some restaurants in the area.

Mexican Food
When I ate at Andele several years ago I found the Tacos al Carbon to be as good as most or all of the ones in El Paso (or at least so close that it did not matter). I have not tried them recently but I still believe them to be one of the best choices at the restaurant. 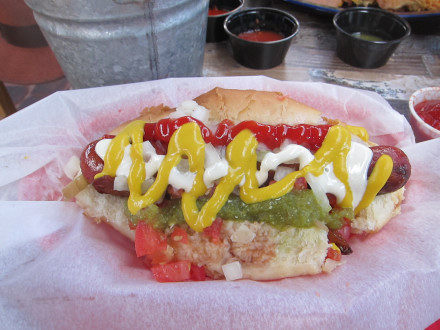 Also on the “Mexican” side of the menu is the Mexican Hot Dog which is loaded with condiments including a pickle and pinto beans, wrapped with bacon, and has a smoky flavor. If this were not enough, the bun was almost a meal in itself with its size being matched by its freshness and flavor. With all of this excellence I was expecting the dog itself to be something special, but instead I found it to be good quality and flavorful but not something that knocked my socks off (which I would not want to happen anyway because the fire pot did not seem to be sufficient to keep my feet warm on this particular day). For the best meat taste in a hot dog I still like Caliche’s, but this one was very good also. 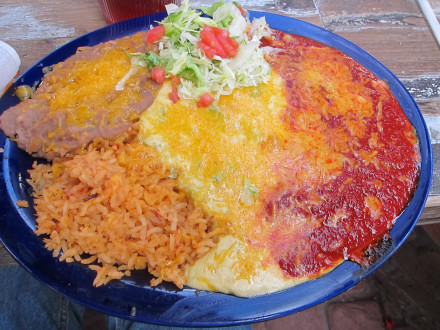 The Stacked Enchiladas with both red and green sauce on top had quite a few good points. First, the chile tasted like it was bona fide locally grown chile with the flavor that makes New Mexico chile so special. I especially liked the deep red chile flavor of that side. Although I am generally not as excited about green chile, Las Cruces restaurants have provided an exception because almost all of them (including here) seem to have very good connections with the local farms to get the freshest and the best varieties. One of the best points of the enchiladas was a soft melted cheese they used in between the tortillas that was a little bit like chile con queso except that the cheese was white and the “chile” was on top in the form of the red and green sauces.

The Red Enchilada side of the stack had what tasted like a thickener in it that reminded me of the enchiladas in southeastern New Mexico (such as Roswell). However, I think they just used a small amount and the taste of the red chile was still there. The big flaw in the red sauce, though, was that it tasted like it had cumin (and not just a small amount). I know this is a personal taste, but I prefer restaurants such as Nopalito who do not have a cumin taste. I am giving the enchiladas five stars because the red chile flavor was so good and the melted queso was so interesting, but I am withholding the red enchiladas from the list of “Best Items” because of the cumin flavor.

The Green Enchilada, on the other hand, was one of my favorite items here. It was spicy like the red side, and went well with their unique enchiladas with the melted cheese.

The Spanish style Rice was very good, as were the non-greasy Beans.

I did not see sopapillas on the menu and this would probably be good with the enchiladas since the chile was fairly spicy (although the rice and beans did a pretty good job of offsetting the heat). 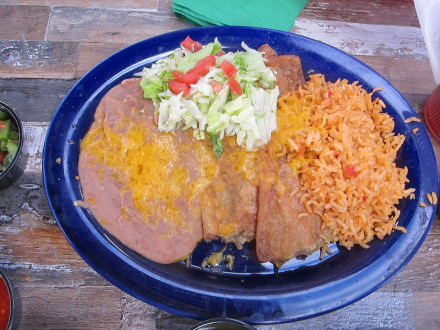 This Chile Relleno had an excellent non-greasy batter and was served with no sauce on top (although you can get sauce at an extra cost). The cheese inside and the flavor and spiciness of the chile was where I noticed the biggest difference between here and Chope’s (Chope’s was closed during the pandemic and now seems to keep irregular hours, so the other restaurants in Las Cruces are the best alternatives). I like these rellenos very much, but they were just not as spicy as they could be. I did notice also an absence of seeds inside (another reason these are some of the best in town).

Other Notes
If I lived in Las Cruces I would probably come here mainly for the tacos al carbon or Mexican dog because there are not that many alternatives in the city for south of the border style food. The tacos al carbon I had at Andele (the main restaurant) were as good as the ones I have had in El Paso.

On an earlier review of Andele I had given the red and green enchiladas four stars, and I do think they are better at some other restaurants (such as Nopalito). However, the melted cheese here is very unique and I did like the chile flavor, so the enchiladas are now on my rotation if I can come to Las Cruces often enough to try different restaurants. I do think the green ones are better though (they either have no cumin or very little so that I did not really taste it in the green chile).

The Mexican dog was very good but this is the first one I have tried, so I do not know if others are better (El Paso has a few “doggos” restaurants that I would like to try).

The one thing I cannot rate is how filling a dinner would be. I tried three meals here but they were shared, so I know the taste of them but not whether I would rate them as being very filling.