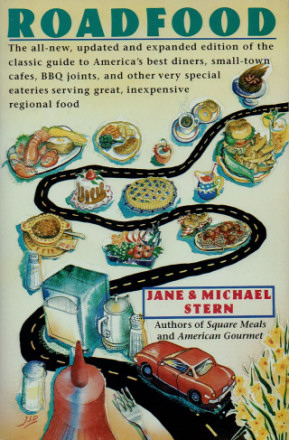 In my quest for nostalgia and information about old restaurants, I came across a goldmine of information from the 1992 edition of Jane & Michael Stern’s book Roadfood, published by HarperPerennial (a division of HarperCollins). One thing I love about this book is that it has its mission statement on the cover, which is to be a “guide to America’s best diners, small-town cafes, BBQ joints, and other very special eateries serving great, inexpensive regional food.”

This is largely the same mission I have for my Restaurant Guide and for many of the reviews published on this site. The Restaurant Guide lists places I find reviewed on the Internet in various cities, many of which meet the criteria set forth by the Sterns. Roadfood only lists a few restaurants per state, but it covers much of the United States (the 1992 edition does not have any listings for Alaska, Hawaii, or Montana). I am also very impressed that the Sterns were able to travel to all of the places listed and personally visit each restaurant mentioned in the book.

Somehow the Sterns got very good intelligence about which restaurants to visit, and this was in the age before the Internet was available. The restaurants included were obviously not picked randomly out of a phone book (one of my methods for finding places to eat in 1992), but there was a specific reason each one was chosen (I imagine they must have eaten in some places that they judged to not be worthy of inclusion in the book). In any case, I judge this book to be a treasure for restaurant historians (is it acceptable for me to invent a new field of academic study which I am sure does not actually exist anywhere?).

There are a couple of reasons I would like to include the New Mexico restaurants in my first blog post about the Sterns’ book. One is that I found this book at the fabulous Coas Books in Las Cruces, a used book store that concentrates on excellence in books as much as the Sterns have done with food. Many of the best additions to my own collection have come from this store (I have always gone to the one at 317 N. Main although they have another location at 1101 S. Solano Dr.).

Also we got word this week that Tecolote Cafe in Santa Fe, one of the restaurants listed in the Sterns’ book, has closed. Now that I have this list I plan to deliberately put many of the ones that are still open on my list of places I would like to visit (some of them are already on the list). One of them, Nellie’s in Las Cruces is where I had lunch right before going to Coas where this book almost magically appeared, with Nellie’s being one of the first restaurants I spotted.

The Sterns list the restaurants alphabetically by state. I am listing all of them here, whether they are still open or not. I will only include a brief summary of the information about each restaurant (there is additional information available from other sources such as the Roadfood web site and later editions of the book).

Chope’s–Rt. 28, La Mesa.  (Not surprisingly) they recommended the chile relleno. Since Dr. Paul Bosland, America’s foremost chili breeder, recommended that they get red enchiladas instead of green, they complied (and were very glad with the result). Note: The Sterns use the spelling “chili” throughout the book.

Don Jose’s Cocina–Route 279, Bibo.  They were surprised this place was even open (with the town’s uranium mine being played out and the area being so isolated). They described eating what was apparently the only thing offered that day (roast beef burritos topped with green chili and an enchilada platter). One fact revealed in the write-up was that the source of many of the Sterns’ tips was Bart Ripp from the Albuquerque Tribune.

Dora’s–401 E. Hall St, Hatch.  Supposedly the owner was trying to change the name because it was named after his ex-wife, but locals kept calling it Dora’s no matter what sign he put in front. What impressed them the most was the chili, red or green (I think they liked the red better). Dora’s had 3 levels of spiciness, and the Sterns said all of them were very good.

Duran Central Pharmacy–1815 Central NW, Albuquerque.  Located in a working pharmacy, they recommended both breakfast and lunch here. For lunch they liked the specials of the day (all were New Mexican cuisine). They were quite impressed by the freshly made tortillas.

Frontier–2400 Central SE, Albuquerque.  They recommended the sweet roll served with coffee. What they liked best, though (and said so), was the breakfast burrito with green chili. They also mentioned that the orange juice was freshly squeezed.

The Hacienda–2605 S. Espina, Las Cruces.  They enjoyed the blue corn enchiladas, tacos in blue corn shells, chili colorado, and chili relleno. Sopaipillas were a must with this, “to salve the tongue.”

Josie’s Casa de Comida–225 E. Marcy, Santa Fe.  Josie’s was said to be good for New Mexican cuisine or Southwest (chicken fried steak, etc.), but the real gem here was dessert (a wide variety and all of them were good).

La Tertulia–416 Agua Fria, Santa Fe.  The Sterns said “the food at La Tertulia isn’t as spectacular and hot as it used to be, but it still tastes good.” What they recommended, though, was the carne adovada, which was one of the best examples of it anywhere. This had become a very formal restaurant, by Santa Fe standards, that gave a very pleasant experience even if the meal wasn’t as good as it used to be.

M & J Restaurant–403 2nd St. SW, Albuquerque.  They say the burrito stuffed with carne adovada may be the best version of the dish anywhere, but I think they liked the blue corn enchilada plate equally well. They said it was great fun to watch people come in from the Greyhound station, just down Second Street, and “accidentally” discover some of the best food they have ever experienced.

Nellie’s–1226 W. Hadley, Las Cruces.  They pointed out that the sopaipilla compuesta was sensational, and the chili relleno and the salsa were also quite notable (they gave great compliments to the green chili, but apparently did not try the red). They also complimented the rich and lardy beans. At that time Nellie’s was open for breakfast, lunch, and dinner.

OJ Sarah’s–106 Guadalupe St., Santa Fe.  This was a restaurant that catered to locals, and which really shined for breakfast. They had so many great sounding items it was hard to choose, but the Sterns liked the cottage pancakes best (the batter was made with cottage cheese).

Powdrell’s Barbecue–11309 Central Ave. NE, Albuquerque.  They say the beef is done right, and they like this the best of the items served. The reason they like this out of the three Powdrell’s locations is the setting in the mountains, particularly at sunset.

Rancho de Chimayo–Route 520, Chimayo.  Their top recommendation is the carne adovada, or the sopaipillas rellenos for those who want something a little less spicy. The town is a destination in itself, having a history that goes back to the eleventh century.

Roque’s Carnitas–Corner of Palace and Washington, Santa Fe.  These are served out of a food cart at lunch time, and unlike most carnitas these are made with beef. Apparently you don’t have to choose the chili you want–these come with green.

Stop And Eat Drive In–110 S. Paseo de Onate, Espanola.  This is a true drive in (you eat in your car). They have jumbo burgers (which are not really very jumbo), but it sounds as if the best items are the burritos or the frito pies. The Sterns recommend getting Hawaiian Punch with a frito pie if you want the ultimate Roadfood experience.

Tecolote Cafe–1203 Cerrillos Rd., Santa Fe.  The Sterns state that the real mission of the restaurant is breakfast, and what they liked best were the atole pinon hotcakes. However, there were so many other excellent items on the menu it required many trips through town to try them all. For lunch they liked the carne adovada (excellent here, as they are at many New Mexico restaurants).

Truchas Mountain Cafe–Truchas.  This was a very small place that served traditional New Mexican food, but what they liked best was the stuffed sopaipilla with green chili. They also had interesting desserts that may be rooted in the area’s Indian history.

Woolworth’s–58 E. San Francisco, Santa Fe.  Apparently they take a local favorite, Frito pie, and turn it into an art form. Most people take it outside and eat it on the square. A bag of Fritos is torn open where they pour in red chili with hamburger meat and cheese. You will need a spoon because the Fritos become soft when saturated by the chili.

Some Comments
For some of these eating places I have written the narrative in the present tense as they are in the book. I did not research which places are still open, and whether I write in the past or present tense is not indicative of whether the restaurant is still in business or not.

There are only a very few points over which I disagree with the Sterns about these restaurants. I would say the Sterns are are correct about some major points such as (1) Red chile usually seems to be a better choice than green for items such as enchiladas, (2) Stuffed sopapillas are a better choice than enchiladas at many restaurants–mainly when they really know how to make the stuffed sopapillas the right way, (3) Blue corn enchiladas are usually preferable to ones made with regular tortillas. The Sterns did a very good job of trying different New Mexican items, and identifying which restaurants served the best versions.

I know that some restaurants have changed over time. I think the New Mexican food in Las Cruces was a lot spicier in 1992 than it is now, except at a few restaurants that are very local and do not attract a lot of out of town visitors. The Sterns comment on several restaurants throughout the state that the flavor is just as good if you get the milder version, and I believe that is the case now with Las Cruces restaurants which serve milder chile than in the past (I am now using the correct spelling of “chile” rather than the Stern version, but of course it is still good no matter how you spell it).

When I ate at La Tertulia it must have been when it was still “spectacular and hot,” because I remember it as being some of the best New Mexican food I have ever eaten.

I don’t know how the Sterns missed El Modelo in Albuquerque, which has been around since well before 1992, but for the most part I think they found and described the truly good New Mexican food that existed at the time.

Although the list was strictly for my own benefit while I was in the city, I think it might be of some historical use today.  It certainly provides a clue about the longest running restaurants in the city, since very few of the restaurants which were open in 1981 survive today.

These restaurants were listed under the “Mexican restaurants” section in the telephone directory, and while the list seems fairly accurate, I had no way to verify it.

One of my favorite restaurants, El Modelo, was not on the list (but it mainly serves take-out orders and maybe the Yellow Page people did not consider it to be a “restaurant”).

The restaurants I visited are in bold.  All others were simply copied from the phone book to give me possible places to try.