Restaurant Guide Main Index Date indicates the most recent update of the restaurants listed Bold indicates my recommendations; others come from what I consider to be good sources Alton Sfumato Pizzeria–4995 Carnes Dr. (Pizza) Open Thu-Sun only (5 to 9 … Continue reading → The previous restaurant at this location was Zen Asian Dining, a “fusion” restaurant with different cuisines whose menu has partially been retained at the new Grand House Express. The original Grand House is one of the anchor restaurants in Oklahoma City’s Asian District, being one of the largest and longest running restaurants along Classen Boulevard.

Zen was primarily a Thai restaurant, and several Thai dishes have been carried over to the new menu at Grand House Express. I thought their Thai food was overly sweet, but not having tried it at the new restaurant I really do not know how it would be now. I did find out, though, that the new restaurant appears to be true to the food of the original Grand House in its Chinese menu. More specifically, it is true to part of the Grand House menu, because Grand House has a regular menu which is largely copied here and a “Chinese” menu which is absent from the selection at Grand House Express. My take on the two Grand House menus is that both are actually Chinese, but the “Chinese” menu has some more interesting items that appeal to me more. For instance, the Express restaurant does not have clay pot dishes, and generally it excludes everything that takes longer to cook than the standard stir-fry dishes served at Grand House Express.

Some Vietnamese dishes on the menu also come from Grand House, and the result is a “fusion” restaurant representing food from different Asian countries, but I think done better than I found at Zen Asian Dining.

Lunch Specials
There are several lunch specials served Monday through Friday that I would find appealing, partly because the price is a little lower but mainly because lunch portions at restaurants are more in line with my appetite. I would probably pick the items that come from Grand House (Chinese and Vietnamese) over the Zen holdovers (mainly Thai). The Chicken Stir Fry in XO Sauce was my first chance to try this sauce since I had another dish with XO Sauce at the original Grand House. Although this was not a lunch special, the price was good and the sauce was still good. XO sauce is something I would describe as having a very intense flavor and is something people will probably either love or hate (I think it is rather smoky and is the Chinese version of chipotle sauce).

While I am not necessarily recommending this sauce for everybody, I did get a sense that the stir-fried dishes and the food here in general is very good. One thing for sure is that Grand House Express has items on the menu that will not be found at many other suburban Chinese restaurants.

Other Details
To me it is a good sign that the restaurant did not have what I really wanted to order, yet I still enjoyed the meal. There are probably at least a dozen other menu items that I think would be equally appealing, if not more.

I think the other Thai restaurants in Edmond are far too good for me to purposely come here and try this type of food, nevertheless there are some Thai menu items for anyone who wants to try them.

The original Grand House is one of the best Chinese restaurants in the city, and adding their food to this restaurant is a huge deal, in my opinion. It is too bad they could not include items like their clay pot dishes, but what they do have appears to be some of the best suburban food in the OKC Metro.

Probably the issue most people will have is the price, but for me it was not too bad (the menu is included below with the prices at the time I went to the restaurant). 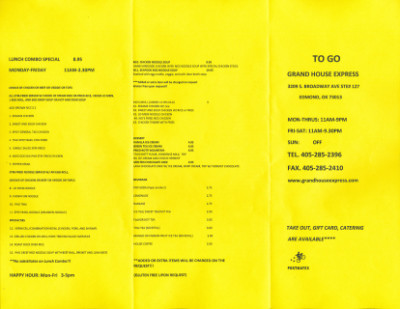 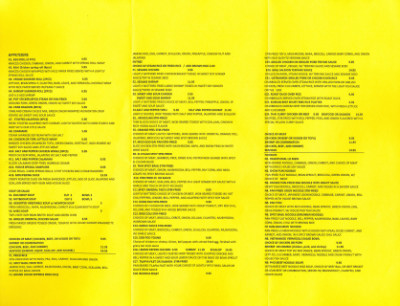