Pacific Ocean Marketplace is one of the anchor stores in the Alameda Square Shopping Center, consisting primarily of stores and restaurants that specialize in Chinese or other types of Asian food. I went to Super Star Asian Cuisine, a Chinese restaurant about three doors down from Pacific Ocean Marketplace, and saw the similarity between this and other big city Asian centers (there is a larger area of Asian and International restaurants along Alameda Avenue). What these areas have in common is that they are where you can find authentic Asian food both from restaurants and markets.

The way I know Pacific Ocean Marketplace is from their roast duck. Apparently they are known for this and other specialties in the Denver area. Some friends of mine got the duck as a takeout order which fed several people, and in fact I have now had it twice. My review is about the duck, although I think both the market and the shopping center as a whole would be of interest of anyone in the Denver area who is looking for authentic Asian food. 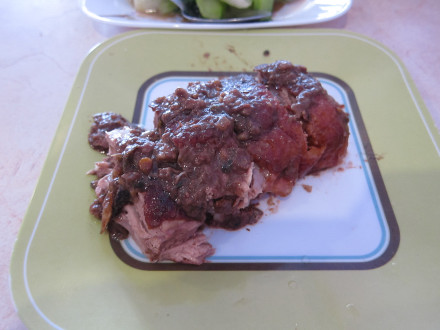 I originally thought my friends got the Roast Duck from Super Star Asian Cuisine, but it turned out to be from Pacific Ocean Marketplace in the same shopping center. Super Star also serves duck and it may be from Pacific, but I do not know and I have not done a taste test of the two versions.

Pacific Ocean Marketplace’s version is very popular, and at least by reputation this is one of their specialties. I thought it was excellent, and worthy of an article. They apparently sell whole or half ducks, so this limits the opportunity to have it for a single meal. I do not say it is impossible, though, because I do not know if there are other ways that it would be available.

This duck was especially impressive because of the moistness and flavor of the meat. I thought it was better than the roast duck I have had in Oklahoma City, and that also sets a high bar.

I think it is also known for its special sauce, but I am at somewhat of a loss here because I have little with which to compare it and I do not remember some of the sauces I have had in the past. The one here, though, was clearly part of the overall excellent presentation of the dish.

Other Observations
My friends brought the duck to El Paso and reheated it using a slow heat, so technically it was a leftover (although the way it was heated was similar to the way it was cooked in the first place). All I can say is that if it was this good as a leftover, it might have been even better when freshly served. It was really good quality meat, and compares to some I have had in fine dining restaurants (such as when they used to serve duck at Inn of the Mountain Gods in Ruidoso, New Mexico).