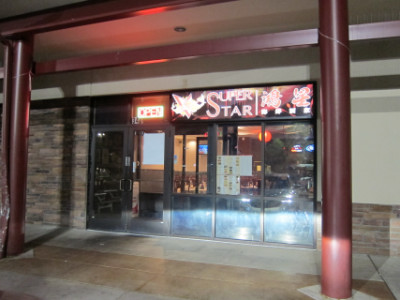 In the Chinese culture the number 8 is considered one of the luckiest numbers, as evidenced by the fact that the parking lots in the Oklahoma City Asian District are lined with cars with an “888” in their license plate (the Tag Agents in Oklahoma are many times able to give customers some choice about the numbers they receive). For me, my first visit to Lucky Star on August 8 (8-8) was particularly auspicious because it gave me some of the best Cantonese food I have ever had in a restaurant, added to the fact that Chinese food is definitely one of my favorite cuisines. If China’s greatest Cantonese chef came to the United States and taught other chefs how to cook, I believe the food would come out like it does at Super Star. I have not had repeat visits to test the consistency of the kitchen, and I have not had the restaurant’s signature dim sum, but so far it has been extremely good.

My first visit was actually a take-out order, although not on purpose. I had spent the day sightseeing in the mountains and arrived at Super Star shortly before 10:00 p.m. Yelp had listed them as being open until 11:00, but as I frequently find on this web site, the information was incorrect and they actually closed at 10:00 every day. It was fine, though, because they prepared a take-out order which was probably the best take-out Chinese food I have ever had in my life. The staff was very gracious in cooking the food because it was so close to closing time, but mine did not take a long time to prepare and they had delivery orders ready to go as well.

The building is a small storefront space, and I can see now why people describe what seems to be Denver’s most popular dim sum place as being very small. Most of the dim sum restaurants I visited in Seattle were at least five or six times as large as this one, and the ones in Oklahoma City are at least double the size. It seemed to me, though, that Super Star had the staff to prepare the amount of food they actually serve rather than what you typically find in a restaurant this small. Between the people they can fit in to eat and the delivery and take-out orders they serve, I believe that the number of people who eat the food from here every day is quite substantial. 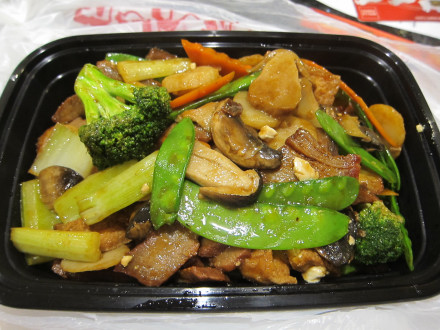 I requested a hot pot because they usually have a very good sauce as well as good quality ingredients. In fact, it seems that only the best Cantonese restaurants even have hot pot on the menu (Super Star serves clay pot dishes but this and hot pot are mostly interchangeable terms). I have had good luck at other restaurants ordering a Pork and Tofu Hot Pot but I did not see it on the menu here. It seems that ordering tofu automatically gets you a good selection of vegetables as well, while the other major style of hot pot is something that is just meat.

It turned out that when I asked for pork and tofu they said this could be prepared very quickly and that I would have exactly what I wanted. Since it was not on the menu I did not have a description of the ingredients that would be in it, but it actually exceeded my expectation of what this dish should be. The pork had a very good flavor without fat and gristle (a step up from the versions which have the fat and skin which is the traditional one I have found in many restaurants). I am not saying that the best pork is the one that is just meat with no fat, but I am saying the way Super Star does it made it turn out much better than I expected.

The tofu was cooked to perfection, and Super Star took what is usually my favorite part of the hot pot and made it what I thought was also the best part in terms of texture, quality, and the way it was cooked.

The sauce, though, was the most surprising part of the dish in being better than expected. It was a thin sauce but very flavorful. It was brown colored and had the right balance of sweetness with other flavors. I would really commend this sauce to readers as an example of authentic Chinese sauces that are not only different but also much better than the ones with which many are familiar. I do not know what the sauce is called, but only that it was in this particular hot pot dish.

The vegetables were very fresh and flavorful. I actually knew from experiences at other Chinese restaurants that they would be this way, but I was not sure how many they would include. It turned out that there was a greater quantity and variety of vegetables than I normally get in hot pot dishes.

Going to Super Star for the first time, the restaurant made sure to explain to me that I did not actually get the hot pot itself as part of a to-go dish. The hot pot is mainly to keep the dish warm for a long time, but since I intended to eat it right away the take-home container was fine. Normally, though, the food would be served in a metal hot pot (here it may actually be made out of clay or ceramic but I did not see which type of pot they use).

Other Observations
This restaurant serves only traditional Cantonese style food, and apparently is in a large enough city that it does not need to supplement its customer base by including Americanized items (there are some American sounding dishes such as moo goo gai pan, cashew chicken, etc., but I have found that it is possible to prepare these dishes Chinese style). What I have tried has been authentic and prepared correctly, based on my experience in other cities such as Seattle. What I can say, though, is that the food here was on a level that was better than just about any Cantonese restaurant I tried in Seattle.

I do not know if the food here contains MSG. I asked them not to use MSG in my order just to cover the bases. I am sure the order did not have MSG because past experience has shown that Denver’s altitude exaggerates the effect of the chemical, and having it in my food would give me a very noticeable headache.

The jasmine tea made with loose leaves was almost as special of an experience as the food. For some reason, though, they did not have any containers to give me the tea for take out, and I was only able to get it because I had my own thermos mug.

Edit Apr. 2021: I originally had a review of roast duck that my friends brought me as takeout, but I later learned that the duck was from Pacific Ocean Marketplace in the same shopping center. Super Star does have duck on the menu, and based on the amount of time and effort it takes to prepare duck I would say it is likely that they get it from a source such as Pacific Ocean Marketplace. I do not know, though, where Super Star gets its duck.