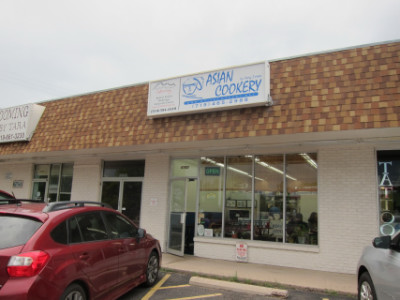 I have to give Asian Cookery credit for staying away from a fusion concept and doing only one thing, which is Malaysian food. I have found Malaysian cuisine to be one of the most delicious in Asia, and I also give them credit for opening this this type of restaurant in a relatively small city compared to the metropolitan areas where ethnic food is usually found. They seem to have found an appreciative customer base that has kept the restaurant going since 1989.

According to the restaurant’s web site Chef Peng Jones has formal culinary training in several Asian cuisines, although Malaysia is her native country. Her husband Ted greets customers, takes their orders, and makes the dishes understandable to customers. Of course one of his most important jobs is to offer a ten percent discount to all “first time customers.” I observed a crew of helpers in the kitchen who appeared to be family members, and who were busy preparing the food along with the head chef.

Ordering is a rather straightforward process. Between photos on the wall, the descriptions given of each dishe, and Ted’s explanation of the ones I wanted to explore further, I felt very comfortable in making a decision about my order.

The food here is Malaysian “street food,” and the menu is very streamlined compared to other Malaysian restaurants I have visited. There were about ten or twelve choices on the menu (you can also choose the type of meat you want for many of them). One thing street food has in common with other types of Malaysian cuisine I have tried, though, is that all of it is flavorful, healthy, and has an interesting combination of ingredients (many of them coming from tropical regions). 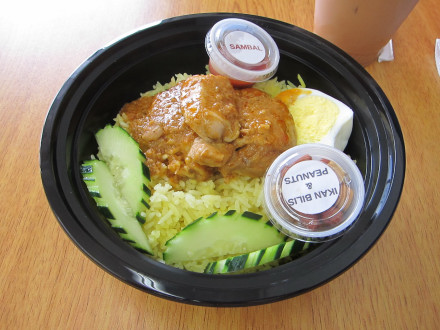 It was explained to me that Nasi Lemak meant “rich rice,” and was considered to be the national dish of Malaysia. It consists of jasmine rice cooked in coconut milk and pandan leaf. The side dishes, including the hard boiled egg, are also traditional. The rice was very fresh, and I very much enjoyed the flavor combination of what was served here.

The Rendang is a Malay curry which in this case was served over chicken (the restaurant also offers beef). The restaurant explained to me that this is a “dry” curry, and I thought it was very flavorful with a good spiciness level but not over the top in this regard. There is a Sambal (hot, spicy sauce) which I added to bring the spice level more to the level which I prefer, and the flavor of the sauce was also good. A small container of Ikan Belis and Peanuts is also included (ikan belis are fried anchovies). In my usual fashion with all things Asian, I ate everything first and did research about what I was eating later.

I also have to mention the iced Malaysian Milk Tea which was similar to Thai tea, but which I think I prefer to most versions of Thai tea I have tried. This is probably because the Malaysian version was not as sweet and had a more balanced flavor, although I am not as good at analyzing things as I am about just knowing what I like.

Other Observations
The restaurant closes at 7:00 p.m., and is closed Sunday and Monday. The restaurant is small, you order at the counter, and payment is made up front. Food is served very quickly and the tables remind me of a fast food restaurant, but the difference with fast food restaurants is in the quality of the food and the fact that the emphasis is on serving healthy food.

The iced Malaysian milk tea was so good that I think this has equal weight with the food in making me say I would really like to return if I can.

One factor that seems to give them a large group of loyal customers is the friendliness of the owner Ted who greets every customer and makes sure they are able to understand the menu and get exactly what they want. This is also a feature that definitely sets it apart from the typical fast food restaurant.

I do not think there is MSG in any of the food here (but I did not specifically ask about it).

One thing that made the food stand out was the coconut rice, and this was a definite taste treat that I was not really expecting.