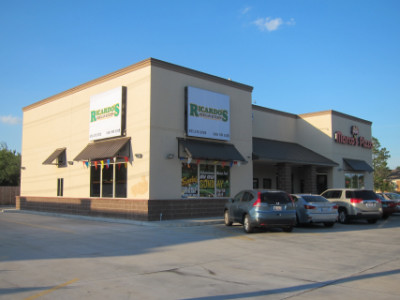 Update Sep. 2016: Ricardo’s was one of the shortest lived restaurants I have ever seen, but it now has a new owner and is called Gloria Mexican Kitchen (Gloria has the same phone number as Ricardo’s). The gentleman who was the cook at Ricardo’s is still the cook, and is one of the owners of the new restaurant. They told me the food was the same, and from my sampling I think it might be even better. The menu has changed, and they will no longer be offering Oaxacan style dishes. There are now fewer choices on the menu, but the items that were there before are still being offered at the same price. The bottom line is that this is still one of the best places in OKC to come for Mexican food.

The complexity of Mexican food makes it one of the most interesting to explore, but also one of the hardest to categorize. In Mexico, restaurants are divided somewhat along the line of “alta cocina” versus “street food,” with a somewhat limited third category in the middle that would correspond to our “family restaurants” with moderate prices.

In Mexico there is also a separate cuisine for each state, although many individual dishes tend to be regional or even national. It is much the same as food being very similar in Oklahoma as in the adjoining states, with marked differences being found in specific items such as barbecue.

Ricardo’s Mexican Kitchen is a new restaurant in Warr Acres, and although it joins a long list of Mexican restaurants in the Oklahoma City area, this one is a little different. The owner is from Oaxaca, a Mexican state renowned for its cuisine and used by Rick Bayless as the template for much of the food served in his Chicago restaurants. The now closed Adobe Grill in Oklahoma City also served this type of food.

Ricardo’s serves few of the dishes that were available at Adobe Grill, but I believe it is still in the early stages of rolling out its menu. For instance, the owner serves mole on weekends, but when I went on a Saturday with the hopes of ordering it, he said it is only available “sometimes.” I got the impression that there will be more of this type of food, though, as the restaurant picks up more customers.

Although Ricardo’s is still a little short on exotic dishes from southern Mexico that are hard to pronounce, it still has very impressive food that tends very much toward upscale (“alta cocina”) cooking. At the same time, this is done with family restaurant prices (the bang for the buck is one of my biggest reasons for recommending this restaurant).

Another very major reason I like Ricardo’s is the consistency of the food. Everything I have tried has been flavorful and high quality. Ricardo’s holds a tenet that I think all Mexican restaurants should follow–high quality should apply as much to the chips, salsa, beans, and rice as it does to the featured main dishes on the menu. 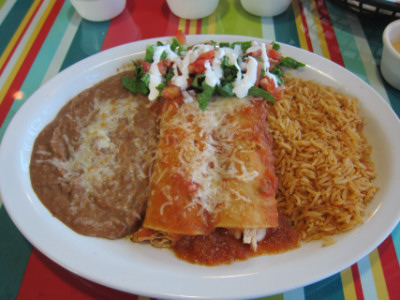 My first sampling of Ricardo’s food was with the Red Enchiladas (technically, enchiladas with ranchero sauce). There are two parts to the menu, and this is one of the items from the first part (the less expensive items that do not contain as much meat).

I do not think these were actually the best enchiladas I have had in Oklahoma City. However, it was very refreshing that the only choices available are authentic Mexican style enchiladas (I think they also have ones with green sauce). It is very hard to find this type of enchilada with red sauce, and I found the ones here to be very enjoyable.

The beans, rice, and salad were also the real deal, although after a couple of visits I have found the beans to be better than the rice.

Quesadilla
On the same visit I sampled an item that has turned out to be one of my favorites–the Quesadilla. This is a large tortillas with meat items and cheese, like other restaurants prepare. The one here, though, had more flavor and tasted fresher than many of the others. 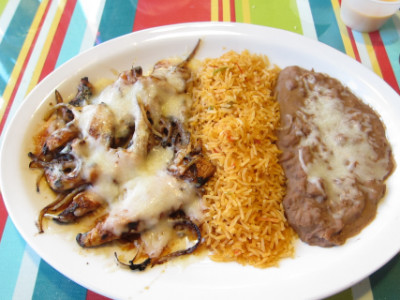 The Pollo Costeño was from the second portion of the menu that supposedly gives you a more substantial meal (I say “supposedly” because I think the enchiladas from the first part of the menu were just about as filling). The pollo costeño had very good chicken and real Mexican cheese. The sauce was listed as a “tomato” sauce, but I will tell readers that it was also very spicy (with about four out of five chiles on my “chile scale”). The dish had a smokey flavor that tasted very Mexican (but this was not my favorite flavor). One thing I can say about the dish is that I think it was totally authentic, and not Americanized. 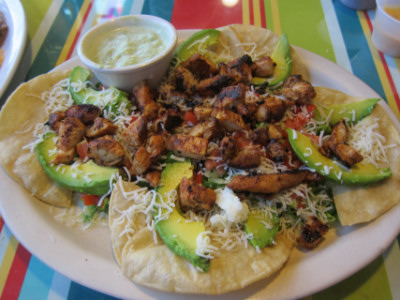 Once again one of my favorite dishes here turned out to be one that I only sampled, but this time I got a photo of it. The Chicken Salad is much more than its name implies–it has large pieces of chicken with cheese and guacamole on a tortilla. The chicken was the same as on the pollo costeño, but I liked the seasoning better on this one. This dish was also a little bit spicy (as contrasted by the quesadilla, which is a good choice if you do not like things spicy). 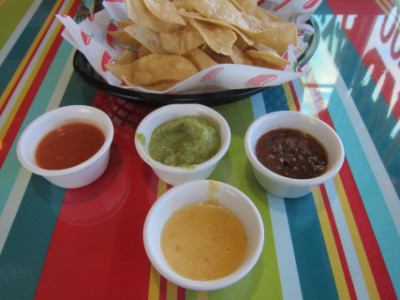 Both the chips and salsa were very noteworthy for being the type of quality that would be found in Mexico or along the border. The red colored salsa and the guacamole were both spicy, while the darker one was mild (and all were good). I think the cheese sauce is an accommodation to Oklahoma tastes, and is not authentic, but it was very good as well.

The chips were excellent, and I think they are prepared the way chips should be.

Some Other Notes
There was conflicting information posted about the hours, but apparently they recently began closing on Wednesday evenings.

It does not seem to be particularly strong on Mexican drinks, as Abel’s across the street is, but I think they do have horchata. I tried the iced tea, and it was good.

Abel’s is another of my favorite Mexican restaurants, and it may be good to make some comparisons and contrasts between the two. Actually the only comparisons that come to mind are that both restaurants are very good and both pay attention to details such as the chips, salsa, rice, beans, etc.

One contrast is that Abel’s specializes in food from southwestern Mexico while Ricardo’s has food from the southeast (although both seem to have dishes from all over Mexico). Abel’s is quite large with an extensive menu, while Ricardo’s is a small operation and has fewer items available. Abel’s has Americanized dishes in addition to the authentic ones. At Ricardo’s I would say they have Americanized some of the presentation of the food, but not the flavors or ingredients as Abel’s has done (for instance, Ricardo’s only uses Mexican style cheese).

Ricardo’s serves street tacos, but mostly has plate dinners with rice, beans, or other extras such as salad. So far I would say Abel’s is better for street tacos simply because they have a much larger selection, but also because they have the best tacos al pastor I have found in the city. I would also say I have been more pleased with the plate dinners at Ricardo’s than at Abel’s. In short, both restaurants have different things, but both restaurants do them very well.