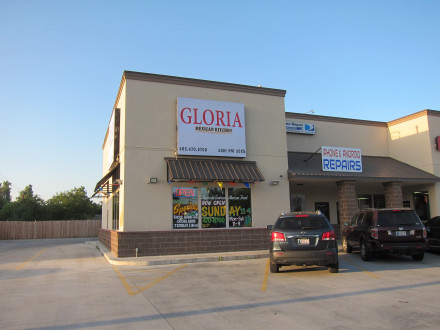 Gloria’s Mexican Kitchen (or just “Gloria” on the sign) is a venture of two former employees at Ricardo’s which used to occupy the same space. One of the owners was the cook at Ricardo’s, and he has continued the same cooking style as before (and I think this is a very good thing!). I thought of Ricardo’s as Mexican style cooking of dishes that are popular with Americans, and I think the same thing is true at Gloria’s.

In defining “Mexican style,” I would say it is very simple preparation of authentic ingredients with an emphasis on bold flavors. Some readers may feel comfortable with Tex-Mex style dishes with lots of cheese on top (much of the food here has cheese, but it does not overwhelm the dish), chips and salsa (they have that here), and a familiar menu (Gloria’s has made a point to do this). I am so impressed with what Gloria’s has done that I can almost guarantee that people will like it, even if they are reluctant to venture to new restaurants.

Gloria’s has continued many of the menu items from Ricardo’s, but expanded it in 2017. Also of note is that they now have daily specials on weekdays (the specials are offered all day). 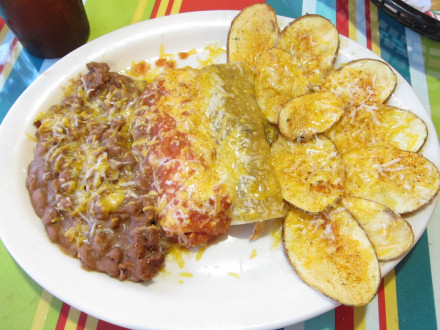 The enchiladas here are genuinely good and genuinely Mexican style. Perhaps more importantly, they are unlike the ones I have found at any other restaurant. The red and green chile used remind me of the ones served in New Mexico, but not as spicy. I would say the recipes probably come from somewhere in the northern part of Mexico.

Traditionally I prefer red enchiladas to green ones, but in Oklahoma City this has been reversed because most restaurants serve tomatillo flavored green sauce that is more spicy and authentic tasting than the red. At Gloria’s, though the Red Enchiladas are the spiciest of the two, and they really have everything that satisfies my enchilada cravings.

The Green Enchiladas are very good also. It did not have the same flavor I find at other restaurants (this is not a good or bad thing, just an opportunity to try a new flavor). I really liked both enchiladas equally, but on future trips I would likely order the red ones because these have been so lacking at other restaurants.

The Beans were very good, and had a traditional flavor (they may be made with lard but I did not ask). The Papas were very good, but the amount of cheese on top detracted a little bit for me. 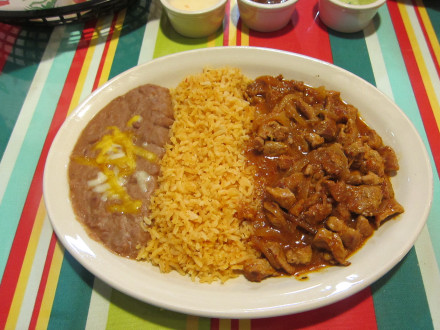 The Guisado with Chile Rojo was as impressive as the enchiladas, and I liked the fact that the chile was at about a four out of five spice level (hotter than the enchiladas). I recommend the rice with it since they are very flavorful and just just filler (you do have a choice of other side dishes such as the papas I had with the enchiladas).

Street Tacos
I had a sample of the Street Tacos, but I thought the flavor was not as good as at Abel’s Restaurant across the street. Still, I thought they were good and probably authentic. 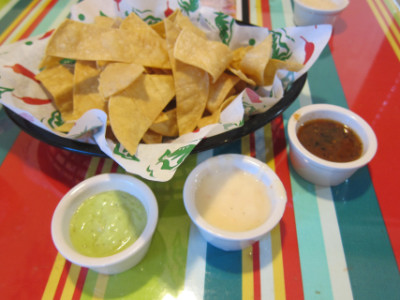 The Chips and Salsa are both excellent, but in addition to the salsa they also serve queso and guacamole dip. These are also excellent for take-home provided there is any left. What is good, though, is that each person gets their own personal dips.

Additional Comments
Some Internet sites (such as OKC Talk) have commenters who indicate that they enjoy authentic Mexican food but have a hard time finding restaurants in Oklahoma City that meet their standards. This is the kind of person that I think would especially appreciate Gloria’s. I think of it as a restaurant that is as good as the ones in El Paso, but with a different style of food (Gloria’s has food that is more interior style than is normally found in El Paso).

Gloria’s is small, but is a sit-down restaurant with all the service you get at larger restaurants. The prices are about average for OKC Mexican restaurants, but if you get the daily special this is a real windfall for your pocketbook (as of September 2017 they were Quesadilla Dinner on Mon.; Tortilla Soup on Tue.; Crispy Tacos on Wed.; Guisado on Thu.; and Fish Tacos on Fri.).

For a long time Abel’s across the street has been my “go to” place for Mexican food. I find Gloria’s to really be better than Abel’s for most things, although the tacos are better at Abel’s and Gloria’s does not have as many menu choices.

I don’t think their horchata is home made, and at least from what I saw I thought it would be better to order the tea. Other than that it is hard to find any negatives here.