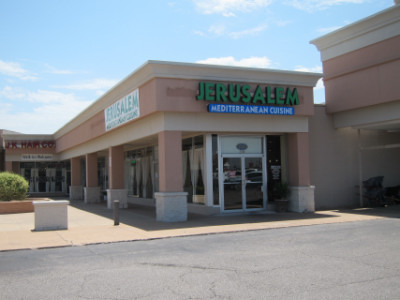 I made my first visit to Jerusalem Restaurant in July 2016, but I was already very familiar with the food served here. This is because the owner Alex was formerly the chef at Camilya’s in Oklahoma City, probably my favorite restaurant in OKC specializing in Lebanese style cuisine. I started seeing consistently excellent reviews of Jerusalem, and now I know that there is good reason for people’s high opinions.

The menu at Jerusalem looked exactly the same as the one at Camilya’s (because I think it is the same). Jerusalem has added some items that are not on the menu such as a couple of kinds of special Middle Eastern style lemonade. In fact, the “bar” area is devoted to preparing the special drinks including a mint tea that I think is a step above the tea I get at Camilya’s.

Jerusalem follows the custom of many Middle Eastern restaurants by serving Halal meat and no alcohol (I know that Camilya’s allows customers to bring their own wine, but I do not know the policy at Jerusalem). For those who are not familiar with Halal, you should think of it as being similar to Kosher (it is not only acceptable to many people’s religious practices, but it also gives a more flavorful and better quality meat in my opinion).

I thought the hummous was better than at Camilya’s (although the one at Camilya’s was already very good), and so far it appears that Jerusalem is like eating at Camilya’s, only better. 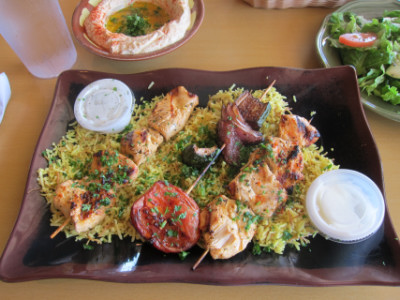 Chicken Tawook is the name used for the grilled chicken (this is cooked like a shish kabob with vegetables cooked on the grill along with the meat). I am very impressed with the flavor of the chicken tawook, and they manage to cook the meat well without cooking the juices out of it. This was my favorite meat item at Camiya’s, and I was glad to find out that at Jerusalem it tastes the same. 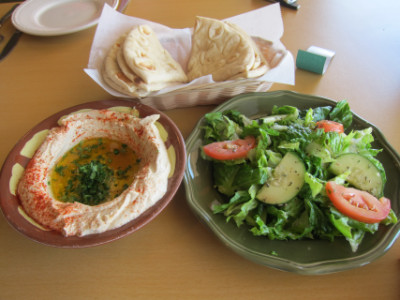 I chose Hummous as a side dish (technically an appetizer), although these should be thought of as “family style” dishes, serving at least two or three people. The hummous here had a better flavor than I have experienced at other restaurants, including Camilya’s, and I thought this was the best I have found in the OKC area. I did mention that it is quite large, meaning be careful of what you order here unless you can share or take home the leftovers.

Lunch
There is no lunch menu at Jerusalem, but they do have several sandwiches that are about the right size and price for most people. At Camilya’s I particularly like the lamb kabob and the falafel sandwiches, and I assume they would be good at Jerusalem as well.

There are several other items I would recommend based on my experience at Camilya’s, led by the keftah skewer, gyros, spinach pie, labaneh, and mojadara.

The Salad I tried at Jerusalem was as good as the ones I have had at Camilya’s, and these are among my favorite items as well.

Additional Information
The dining room is a little larger than at Camilya’s, but this is still a fairly small restaurant. It is open daily, and is located in a large strip shopping mall (so there is plenty of parking).

Best Items: Chicken Tawook, Hummous, Salad (and probably several others based on my experience at Camilya’s).