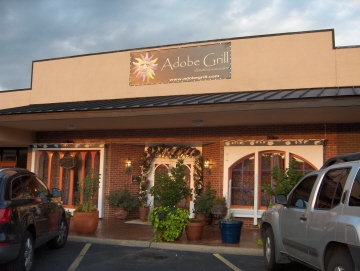 Note: Adobe Grill served excellent authentic food from the Oaxaca and Puebla regions of Mexico, and I think it serves as a good benchmark for any other restaurants that claim to be authentic.  I did not give the restaurant a rating consistent with this food because I had trouble getting this food.  There were two versions of many items, and depending on who took my order, it either was or was not communicated to the kitchen that I wanted the “authentic” version (I was actually using the names printed on the menu rather than my own somewhat facetious terms).  They would not correct the mistake, and I thought it best to give a rating based on the food I actually got rather than on what I knew they could make but was not always served to me.

When Adobe Grill opened it was not certain that anything other than Tex-Mex would be popular in Oklahoma City, but the authentic food from the interior of Mexico has turned out to be quite a hit with locals. There are a few standard Tex-Mex items added to the menu to appeal to a wider audience such as taco salad, tortilla chips and queso dip. Overall, though, the menu consists of items that would be found in Mexico City or other typical Mexican cities.

Leticia, the owner, has made every effort to provide high quality items as they would be found in Mexico, and she has been quick to point out that the recipes are not hers, but are from her abuelita who comes in every morning to prepare the sauces that will be served that day. I honestly think the level of care taken to provide quality food here is something that will be found in very few Mexican restaurants.

Not all of the food is as spicy as I have indicated on the “chile scale.” Some of the salsas, though, have quite a kick and are comparable to the ones that would be found south of the border. I think one secret to Adobe Grill’s popularity is that it is spicy for those who want it that way, but much of the food has a more moderate heat level that is flavorful without being “dumbed down.” 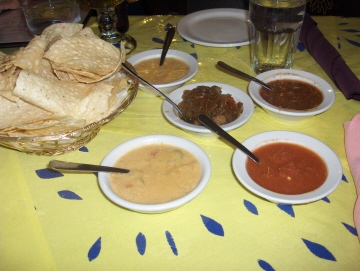 Queso and several types of salsa are served

All the salsas are home made, and of course this is made obvious by the fact that no one else serves the type of salsas that are given to customers here. There is no need to ask for a “spicy” salsa as I do at many restaurants, since several of the ones served are already quite hot. I did not really have a favorite–I enjoyed them all.

Many of the dishes here are typical of the food found in Oaxaca, but I think the emphasis is on the cooking style found throughout the entire southern region of Mexico rather than a single state.

I found the poblano sauce to be the best one served. The name signifies that it is from the state of Puebla, and unlike some other Mexican restaurants that use Mexican place names in their dishes, the recipes at Adobe Grill most likely really originate in the place indicated.

Mole is another sauce that has been consistently good, and while I am impressed by its apparent authenticity, the flavor is not really better than mole from northern Mexico, it is just something different to try that is enjoyable. In any case I do not know of any other restaurant in Oklahoma City that serves mole from the southern part of Mexico, so coming to Adobe Grill will allow diners to judge for themselves whether they prefer this to other styles of mole.

Chipotle is another sauce served at Adobe Grill that is not likely to be found anywhere else. The restaurant provides a free “sampling” plate containing the various sauces so you can decide which one(s) you would like before you order (but I have found that they do not always advise customers that it is available). 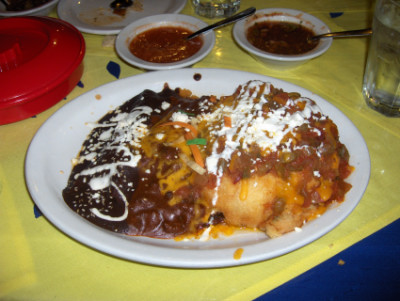 Several combination dinners are available that offer a good way to sample the food that is available. The “Especial de Corrina” has the greatest variety of items, and comes with two side dishes. The Chile Relleno (poblano pepper) covers about half the plate by itself, and would make a meal by itself. Since I had help eating this dinner, though, I was able to finish everything that was served, including several items served on separate plates.

The Black Beans on the left of the plate looked enticing, but did not match the ones served at Cafe do Brasil, which are still my favorites. Roasted corn also came with the dinner, and were served on a separate plate.

A Tex-Mex style Tamal was quite good, and in fact was as good as many of the tamales I have eaten in Austin and San Antonio (in the heart of Tex-Mex country). This had a thick and flavorful masa that I thought probably came from a family recipe, and was as carefully prepared as any of the dishes from southern Mexico. 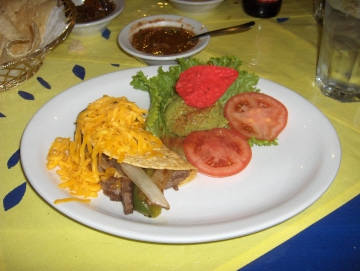 One of the tacos served at Adobe Grill

I am not sure which version of Tacos was served with the “Especial de Corrina” (shown in the picture above), but this one came with yellow cheese, a crispy shell, and fajita meat. Other tacos are available with soft tortillas and other choices of meat and fillings.

My favorite taco is Tacos de Gilberto, with tortillas dipped in a special sauce, equally good meat, and a garnish of onions, cilantro, lime juice, and sliced avocados. The white cheese sprinkled on top added to the flavor, and I thought this dish alone made it worth going to Adobe Grill. While the other tacos served at Adobe Grill are a step above the ones available at many other restaurants, I thought the tacos de Gilberto were clearly a standout. 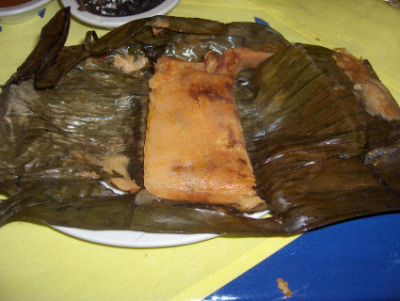 Tamales Aztecas are one of the more authentic dishes served, but I have had mixed results with them. Wrapped in banana leaves and filled with Carne Adobada, I thought the meat was dry and not very flavorful. The masa was good, but I did not like it as much as the Tex-Mex tamales. I think there are so many ways of preparing tamales that there are bound to be some that some people like better than others. I have found all of the ones at Adobe Grill to be as close to the “real thing” (either Mexican or Tex-Mex) as can be found in Oklahoma City.

One of the best features of Adobe Grill has been the service and the home style atmosphere (including hand crafted furniture and decorations). When I made a visit one year on September 16 (one of the most important Mexican national holidays), we were treated to a feast of items that included the ones we ordered and ones that were thrown in free by the owners to help us celebrate the occasion. The Buñuelos given us by the owner made one of the best desserts I’ve had in a long time, and was so much more satisfying than the typical sopaipillas served in OKC restaurants that I would have no hesitation paying extra for them in the future. I know the owners try hard to give everyone a great experience so they will tell their friends.

The actual experiences I have had at Adobe Grill have been mixed, in spite of the owners’ best efforts. For instance, the “Especial de Corrina” pictured above came with the generic version of several of the items even though I asked for the “southern Mexico” versions. Adobe Grill has two or more versions of tacos, enchiladas, tamales, and other dishes, and one of its best features is being able to try the different styles of food that are available. I discovered firsthand, though, that customer’s requests are not always communicated to the kitchen. Everything at Adobe Grill is good, but if you want it prepared a certain way it might be best to talk directly to the owner or manager.

Even though I did not get the “southern Mexico” version of some of the food, I thought a lot of it was typical of central or northern Mexico. The white cheese, sauces, and chiles used were all high quality ingredients that the Mexican people enjoy without worrying about the region of their origins.

It is well worth seeking out the type of Mexican food served here that is so rarely found in the United States. Even the Tex-Mex versions of the dishes are quite notable, and in some cases have made it worth my trip to Adobe Grill. The interior and southern Mexico style food, though, are always interesting and add variety to Oklahoma City’s Mexican food dining scene.