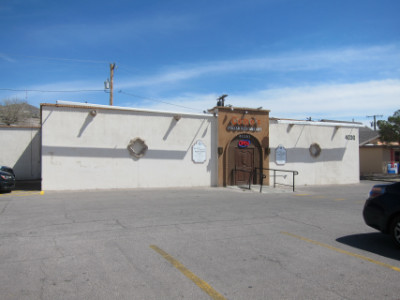 Como’s is one of the city’s longest running Italian restaurants that is still around, and this has several implications. One is that it serves the traditional red Italian sauces that are a throwback to the past when almost all Italian restaurants were “Italian American.” Another is that they are probably not going to start being innovative with the menu or change the way they are doing things–what brought them this far is what keeps the old customers returning.

When I first came to El Paso I found that Italian food was one of the few cuisines popular locally besides Mexican, and that it is one of the city’s “comfort foods.” I think this is what people expect when they come to Como’s and the city’s other long time Italian restaurants–something they remember when growing up and which still tastes as good today.

Part of Como’s success is that it is a family-run operation. Quite a few years ago there was a second location which was called “Como’s No. 2,” but I think for this type of restaurant it really is best if they keep the operation small so that the food remains the same over the years.

I do not consider Como’s to be particularly authentic, as implied by the description I have given it as “red sauce Italian” (Como’s web site, though, says that the food comes from “Old world recipes” and I am sure that this is the case). Regardless of whether you call it Italian or Italian-American, I have to say that it has fresh and vibrant flavors that are as good as ever.

After all these years there are still many items that I have not tried, since I have stuck mostly with the red sauce dishes. Some of the other dishes may be even better than the ones with red sauce (and according to some reviews I have seen this seems to be the case). I would say look at the reviews on Yelp and other sites because I am not going to be able to cover all the dishes served here.

The marinara is my default sauce here (as it is at almost all Italian restaurants). I think the “meat sauce” is the same sauce with meat added, and customers can specify which one they want (but I have found that the waiters do not always ask). The vegetable lasagna came with marinara sauce as the default.

Another key element here is the salad which comes with most meals automatically without having to pay extra (although you can upgrade to a large salad at an extra charge). This is one of the better salads in town, at least when it comes to the ones that are free. Recently I have noticed fresher and greener lettuce than in the past, and this is good. To me, though, the dressing along with the garbanzos and olives they put on the salad make it a very good experience. 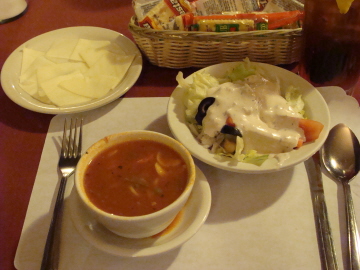 For years one of the best deals at Como’s was the Spaghetti specials on Tuesday and Thursday evenings. Those as old as I am can remember when it started out as “all you can eat spaghetti,” but even after this was discontinued the plate served was all that most normal people could eat. One of the most “special” parts was that you got soup, salad, and cheese slices added at no additional cost. I have not gone on these evenings recently, but minus the cheese slices, all of the items are available on the regular menu (and the salad comes free with most meals).

The Minestrone Soup would probably not be considered anything special in Italian enclaves such as Boston or Saint Louis, but by El Paso standards it has always seemed to blow away many of the insipid soups I have had at other restaurants. I do not believe that the soup is totally vegetarian, but it provides a large portion of anyone’s daily diet of vegetables. 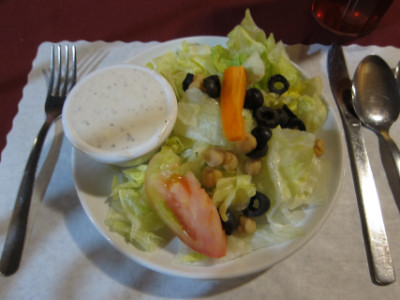 This photo shows a recent Garden Salad I have had with greener lettuce than I experienced in the past. The salad always tastes pretty fresh by El Paso standards, and even pale green lettuce was made good by the excellent dressing they have. The best feature of the salad is the generous portion of garbanzo beans and olives, although the tomato seems to consistently have a pale color and to be the weakest part of the salad. 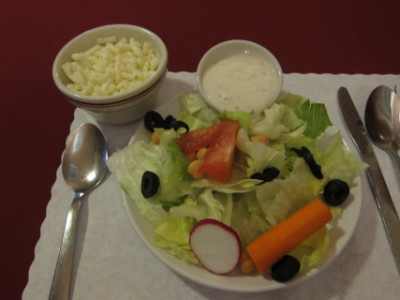 I also found out that you can request cheese with the salad at no extra cost, and a few other modifications are available as well. Of course I think this makes a good salad even better. 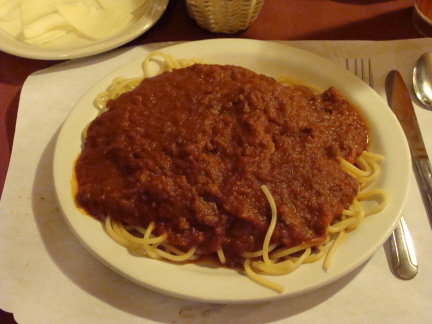 Spaghetti comes with either meat sauce or marinara (an oil and garlic sauce is also available at the same price and others such as shrimp are available for an extra cost). I tried the meat sauce perhaps two or three times, but after ordering the marinara I have always preferred it. One reason I think I like the spaghetti more than other dishes is that it is very simple–both the pasta and the sauce have a good flavor, and this is about all there is to the dish. Another good thing about the spaghetti is the cost. 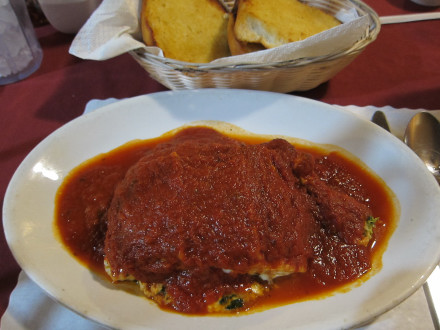 The Vegetable Lasagna is not on my list of items I usually order here, but I experimented and tried it on a recent visit. Although it had the same marinara sauce that comes on the spaghetti and that has been my favorite, I found it to be very sweet. It had been about ten years since my last visit to Como’s, and I think I was probably more cognizant of the sauce’s flavors than I had been previously. Although the sauce turned out to be not quite what I expected, the pasta was quite good, especially because of the spinach (it also had broccoli which was good as well). I do not think their sauce has changed but I have two theories about what happened–either it tastes better on spaghetti than the vegetable lasagna or the sweet taste is more noticeable to me than before. This may be the reason I classified Como’s previously as an Italian-American restaurant but I could not put my finger on the reason why. 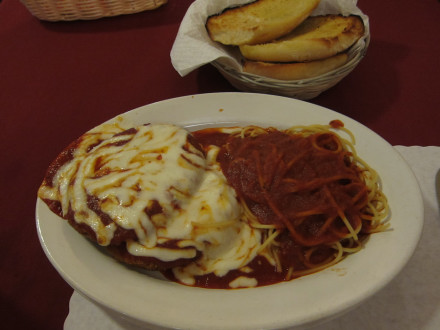 I believe the Eggplant Parmigiana to be one of the restaurant’s specialties, and the lunch portion is shown in the above photo. If I were to rate what I consider to be good about this dish it would start with the sauce, then it would be the breading, and then the eggplant. This is fine because eggplant is not one of my favorite vegetables, and Como’s prepares it in a way that I like it (as opposed to many eggplant dishes I have had). They use a mozzarella cheese on top, and it is excellent as well.

Pizza
Como’s also offers a pizza or spaghetti special on Tuesdays and Thursdays after 5:00 p.m. with the soup and salad, but it has been over ten years since I have ordered either one. The pizza had a good freshly cooked red sauce, but at the time I thought other restaurants had a better pizza (thus I usually chose spaghetti over the pizza for the specials at Como’s). Both of the specials, though, are a good deal.

Other Items
Como’s serves a basket of garlic bread with each order that is so reminiscent of the ones I used to get in Italian restaurants growing up that it is worth coming here just for the nostalgia. I think, though, that Como’s bread still tastes good because it is careful to cook it the right amount of time and apply the right amount of garlic.

I always remember the iced tea as being particularly good here, but I think now most of the other restaurants serve upgraded tea to match the one at Como’s (which is still excellent).

A Summary
I believe Como’s strength is in serving everything freshly prepared, thus patrons should not expect everything to come out of the kitchen quickly. This is a comfortable restaurant that feels like home, and the prices are reasonable.

Ordering from the dinner menu gives you more food but I would have a hard time eating all of it and for me the prices are high. In my opinion the lunch menu offers a much better deal, and the Tuesday and Thursday night pizza and spaghetti specials are also very good. The lunch menu is abbreviated, but mostly what is missing are the high end items that cannot be easily prepared in a smaller portion.

One of the employees told me that probably the things that set Como’s apart from other restaurants are the sauce and the special parmesan cheese the owner buys. I certainly agree about the cheese–it is one of the best I have found anywhere. The red sauce tasted sweet on the vegetable lasagna, but it went quite well with the eggplant parmesan, and thus I can see why many consider it to be one of the restaurant’s best features. It is also very good on the spaghetti.

I also have to say that the restaurant has been a little bit inconsistent–not whether it is good or bad, but whether I rate it as five stars or four. I have been coming here for years, and with the number of hours it is open they are bound to have different cooks on different shifts. I have always liked it, though, and I would say the dish I have liked most consistently has been the eggplant parmesan.