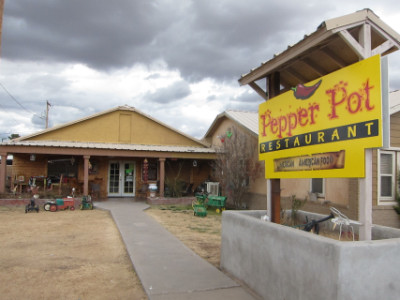 Pepper Pot should be on anybody’s short list of traditional Southern New Mexican style restaurants that serve it for locals (meaning that you get the real deal chiles which are not dumbed down for tourists). I have the same respect for restaurants which have switched to milder chiles but retain the same rich flavor that comes from being locally sourced (Chope’s has some milder chiles than before in some of its dishes but they still have an excellent flavor).

Pepper Pot, however, still has chile that is so hot it tests the limit of my ability to actually enjoy the food, yet it is so satisfying once the meal is finished. There are a dwindling number of restaurants who still dare to serve this type of chile, yet I remember when it was commonplace (even La Posta was near this heat level when I went there as a youngster).  I am just trying to do my duty as a blogger, though, and give people warning of what they will face if they come to Pepper Pot.

There are alternatives to Pepper Pot’s very spicy red chile, though. The green chile is the next step down–not as spicy but still with a good bite. The chile relleno without any sauce on top is even less spicy, but still has a good chile flavor (both the green chile and chile relleno are what I would rate as four chiles on the five chile scale). Pepper Pot even seves American food for those who do not want anything spicy at all (I am not sure why anyone would go to America’s chile capital to eat American food, but it may be able to satisfy anyone in your party who is not ready to try the hot stuff). 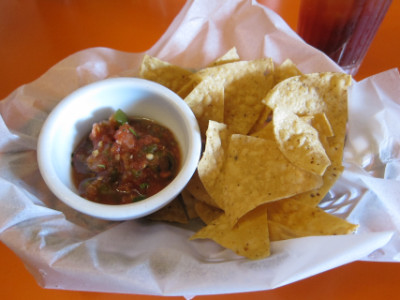 I usually like the chips and salsa at any restaurant, but it is not often that I take note of both of them like I did at Pepper Pot. The Salsa is actually not as spicy as it is at most New Mexico restaurants, yet I think the flavor here far exceeds most of the others (this is an obvious sign that they use fresh local chile here). The chips were good for not having anything that would detract from them (such as having too much of an oily flavor). 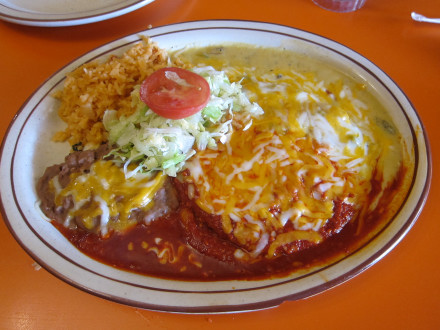 The Red Enchiladas are the spiciest of the two types, and I think also the most flavorful. I have gone to several restaurants in southern New Mexico where I thought the red chile was lacking the flavor it should have, but the one at Pepper Pot was an example of the flavor the others were missing. I had to take several bites before I got over the overwhelming spiciness and could really enjoy the flavor, but in the end I thought these were possibly the best red enchiladas in New Mexico. I have been eating this type of red chile since I was growing up and I know that not everyone will really appreciate something so hot, so I will just say try it if you think you will like it.

The Green Enchiladas were not nearly as spicy. In fact the chile was different than at most restaurants–it looked as if they made sort of a chile con queso using the green chile rather than the standard New Mexico chile. It was still very good, but I would say probably not what I was expecting in Hatch. 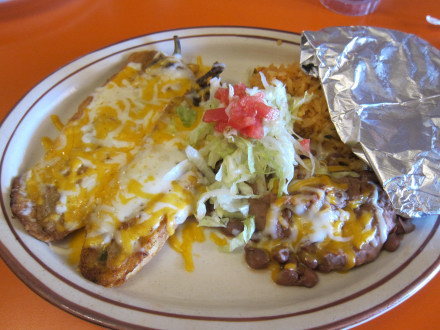 The Chile Relleno was the choice of my dining companion, and we split both plates so we could both have a variety of items. The relleno plate comes with red, green, or both sauces if you want it, but it costs extra. We actually had enough red and green sauce from the enchiladas to put this on the relleno if we wanted, but served without the sauce it turned out to be almost as good as the one at Chope’s. These had cheese on top while the ones at Chope’s only have cheese on the inside. Even accounting for this I would say the only difference with Chope’s is that perhaps the batter here was a little more oily. Everything else (and especially the chile) was excellent at both places.

Other Notes
I did not try the stuffed sopapailla which is many times my favorite item at New Mexican restaurants, but I had more than enough to eat as it was. Based on the green chile I gave Pepper Pot a rating lower than Chope’s, but the stuffed sopapilla might bring it up (I thought the red chile was definitely better than at Chope’s and an excellent sopapilla here might give this restaurant equal weight to the excellent relleno at Chope’s).

In any case, I am only trying to give full disclosure about the pluses and minuses of each restaurant. To me all of the traditional New Mexican restaurants are good, but they just have different degrees of excellence.

I passed by Sparky’s, know for its green chile cheeseburgers but with a waiting line that rivals Cafe du Monde in New Orleans. I hope I have convinced everyone to stay away from Pepper Pot so it does not develop a similar waiting line (this is your warning!! it is way too spicy!!). Actually for some my warning would be appropriate–they are not messing around with the chiles here.