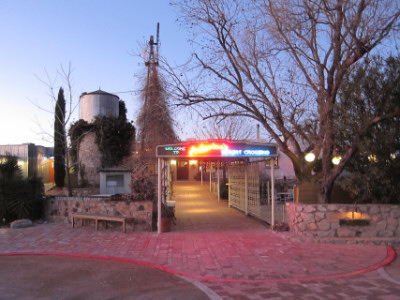 Ardovino’s Desert Crossing is an El Paso institution which I took far too long to visit for the first time, given its reputation for excellent food. Actually, this was part of the problem–I thought it would be too expensive, too stuffy, and too much out of my normal comfort zone in order to be something I would enjoy. It turned out, though, that none of these things were true. They do have some items that are in the fine dining category and are more expensive, but their most popular item is pizza–you cannot get more well known and down to earth than this. Other items are a little upscale but are similar to items served in other Italian restaurants. It is just that the ones here seem to be more European style and are not covered with a generic American style red sauce as is the case with some restaurants. 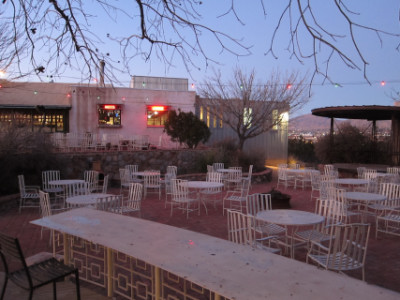 As far as this being an “El Paso institution,” this is because it is about a mile from the El Paso city limit (and the Texas-New Mexico state line) in an area which at one time had more liberal liquor laws than in Texas (now both states are about the same). The part about Ardovino’s being stuffy went out the door when I saw several men dressed in blue jeans (as I like to wear) who I would guess had come here after a day at the nearby Sunland Park race track. The outdoor patio gives it an even more casual feel, although it was not being used on the winter evening when I made my first visit. 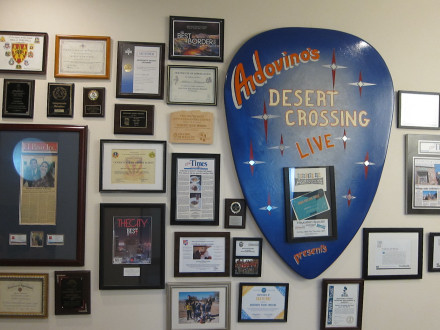 I had also heard that Ardovino’s mostly served things other than Italian food (and I was not sure what this was). This made me think I might be paying high prices for food that I would have to wait to get there in order to find out what it was. It turns out that this is somewhat of a correct description of the brunch served on Saturday and Sunday. The food seems to fall more into the New American or Southwest category (salmon Benedict, pozole with an egg, etc.). Pizza is available, though, as well as some standard American dishes such as biscuits and gravy.

Dinner is currently served Thursday through Saturday, and this is where it is almost exclusively Italian food. This is the upscale type of Italian food I have found in the better restaurants in various cities. Some are items that I did not recognize, and there is just a limited choice of the more common items (spaghetti, lasagna, ravioli, etc.). In fact, I think if they serve spaghetti at all it will be in a more upscale form such as the bucatini described farther down in this article.

Ardovino’s is proud of the fact that they “offer locally sourced and organically grown selections” on the menu, with many grown in their own garden. They roast their own tomatoes, and use only fresh ingredients. I know this information because the manager told me (he comes to every table to make sure everything is going well with the meal). It is not as if anything really could go wrong because the restaurant is like a well-oiled machine which ensures that you have what you need. The hostess answered my questions about the food and made some spot-on suggestions before I even sat down, the waiter did a great job, and when the manager came out to chat it seemed to be just another day at the office to confirm that the food and service were still as good as always.

One note I should make is that because much of the food is local and organic, this seems to dictate that the menu is seasonal and rotating. As of the writing of this review (in summer 2022) I have already noticed that some of the items served in the winter have been replaced with other dishes. One of these is the ravioli (which was one of the dishes I got to taste). If you want any particular dish it would be best to consult their web site before going. I think, though, that anything served here will be back on the menu at some point. 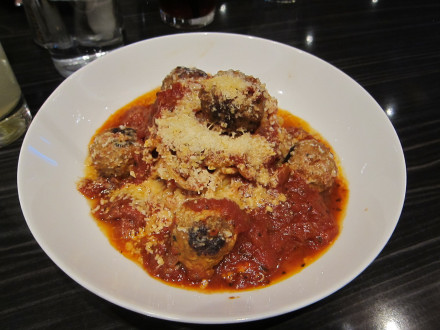 Bucatini and Meatballs is a dish with pasta, meatballs, and marinara sauce. While bucatini is similar to spaghetti, it is thicker and has a large hole in the middle, allowing the pasta to soak up more of the sauce than regular spaghetti. The pasta here is house made, which is even more critical to the flavor of the dish than the pasta’s shape. I do not know the story of Ardovino’s marinara sauce, but it was excellent with just the right amount and right kind of spices. The third ingredient is “Mamma Ardovino’s Meatballs,” which showcases a family recipe which I am sure has been passed down for many generations. In any case, when you get the meatballs here you are getting a special treat. 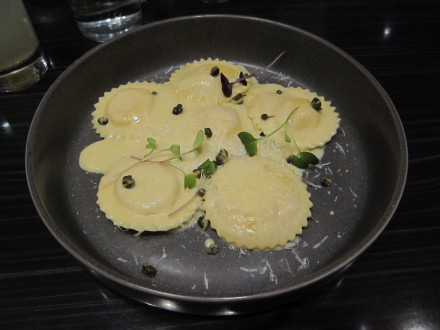 The Ravioli had a salmon filling, and was also quite good. It was really hard to compete against the meatballs and marinara sauce of the bucatini dish, though, and I would give the edge to that one. Apparently the ravioli is a rotating dish, and there are other salmon dishes that might be served in its place (the summer 2022 menu has salmon with a soy glaze). I think there will always be new things to try even if you think you have already found the best ones.

Summing It Up
I have found Forghedaboudit in Las Cruces  to be another upscale Italian restaurant which is similar to Ardovino’s in many ways. I could point out differences in the menu, the way the restaurants are run, etc., but the bottom line is that they both are very good. El Paso also has restaurants that are very upscale such as Mi Piaci which has a similar quality of food. I have had too few visits to all of them to do a full analysis of the restaurants, but I can say that there are things about all of them that I really like. A preliminary finding of mine (and still open to revision with further visits to the restaurants) is that between the two New Mexico restaurants, Ardovino’s has a better marinana sauce while Forghedaboudit has better meatballs. The important thing, though, is that these two restaurants as well as Mi Piaci and others in El Paso have raised the level of Italian food in the area quite a bit. Ardovino’s has actually been doing this for a number of years but I never experienced it until recently.

One thing I understand about Ardovino’s Desert Crossing is that at one time in the distant past there was some connection between it and the Ardovino’s in El Paso, but at present they have different management, different menus, and different recipes.

I believe pizza is the most popular item at Ardovino’s Desert Crossing. I do not know if it is actually the best item here because I have not tried it. The different styles of pizza are constant fixtures on the menu, though, while I think many of the other menu items are subject to change. I have the margherita pizza on my wish list.

One thing I really liked about the restaurant is that it has warm air blowing out of the vents in winter, which are at floor level. I though this was great because my feet are almost always cold this time of year.

One thing that would not worry me too much is making the trek to Sunland Park only to find that tables are unavailable or there is a wait time. The restaurant is quite large and the outdoor patio is also available. I also got the impression that after Covid they had a decline in the number of customers who came here. They reduced their hours so that dinner is only served Thursday through Saturday, and I would think this would put even more pressure on the restaurant for the three days they are open, but so far this does not seem to be the case. I do think, though, that even before Covid the most popular times here were for brunch.

Cuisine: Italian
Cost: $$$
Hours: Dinner Thu-Sat; Brunch Sat & Sun
Smoking: No smoking (Yelp says smoking is allowed outside)
Alcohol: Full Bar
Special Features: Dogs are allowed on the patio, and Google Maps says they are also allowed in the restaurant if they are on a leash