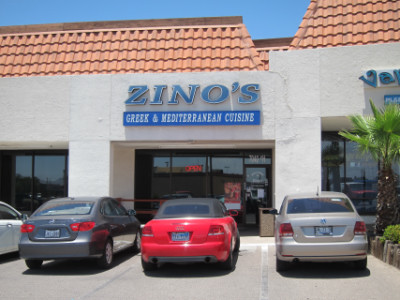 I have lived in both Oklahoma City and El Paso, and based on years of experience my stereotype of El Paso is that you cannot find really good American food, Latin American cuisine other than Mexican, European food, or Asian food other than a limited number of choices in a limited number of places (there is an equally valid stereotype that you cannot find really good Mexican food in Oklahoma). Until recently I have also had a hard time finding really good Middle Eastern or Mediterranean food in El Paso, but Zino’s is one of the places that have convinced me that this is no longer the case.

Zino’s has a combination of items that seem to be uniquely Greek and those that are served in a larger area of the Mediterranean and Middle East. Even though it expands the definition of Greek food to other countries, it is probably typical of many restaurants in Greece itself. My favorite items at Zino’s so far include some of the Greek ones (such as the lemon chicken) and the Middle Eastern ones (such as the falafel). I am not trying to be a stickler about what is authentically Greek, but I enjoy all kinds of good food wherever I can find them. Here I think there are a large number of possibilities for finding something unusually good. 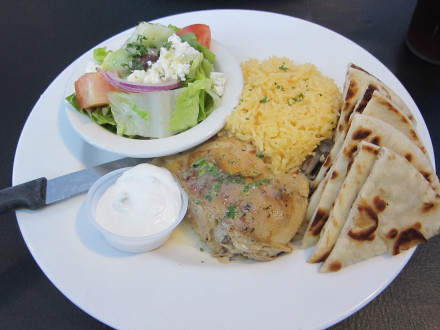 My first visit to Zino’s was in 2019, at which time I ordered Lemon Chicken which was the Thursday lunch special. After 2020 I have found that lunch specials have practically disappeared from all restaurants, and I suspect this is the case at Zino’s as well. If this is true then I will miss the specials as much for the smaller portions as the lower prices.

The chicken was a small piece but with an unusually good flavor. The dinner menu lists “Rosemary’s Greek Lemon Chicken” which I am now concluding was served for the lunch special, but in a smaller portion. I have to say that this is some of the best Greek style food I have ever eaten–I am glad it is on the menu where it can be ordered any time, but if I find it available as a lunch special I will be especially happy. 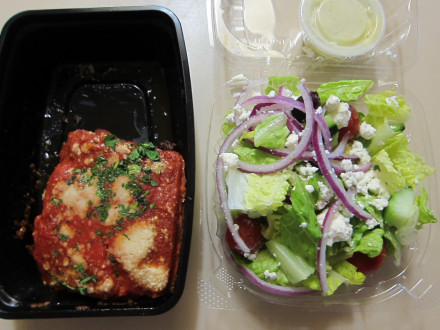 I got to try Zino’s Moussaka for the first time as a delivery order and of course to explore more of the menu. This dish was solid, came at a good price, and the quantity was large enough to be filling without being at the point that I had leftovers for another meal. I would say it was much like going to an Italian restaurant where I order items with tomato sauce, and that the tomato sauce was the main flavor component of the dish. When I look at examples of moussaka on line I see photos showing a layer of eggplant on top rather than the tomato sauce, so I am not sure why the one at Zino’s is different. It did taste good, although I thought the one at Casa Pizza was more traditional and that the flavor was a bit better. 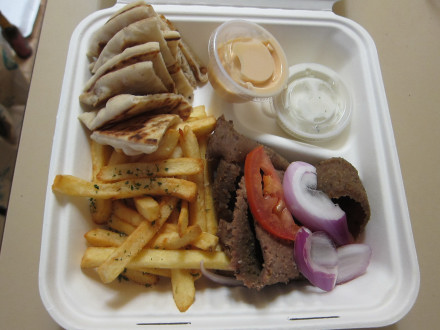 The Gyros Platter seems to be one of Zino’s most popular items, and I think it is because this dish is familiar to most Americans. I would say gyros is also near the top of my “sandwich” list because I love the pita and the savory sauces that you can add. The quality of the meat seemed very good although I did not think it had as much flavor as some others. 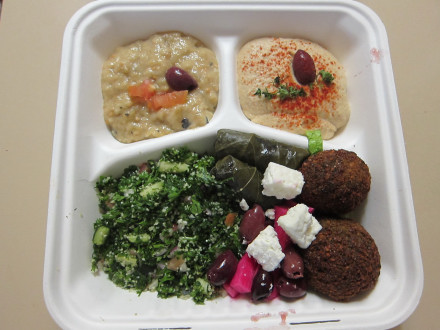 I would say that my favorite dinner so far, though, has been the Small Tour of Greece (their vegetarian sampler plate). It checks two of my main boxes–it has good flavors, and it seems to be very healthy. Because of the variety of items included it is really hard not to find something to like, but I really liked everything except for my perennial least favorite Mediterranean dish–the Baba Ganouj. There are some versions of baba ganouj in El Paso and elsewhere that I like pretty well, but the one here has too much of an eggplant flavor for it to be something I would seek out.

There are two items, though, that I think really make this dinner worthwhile. One is the Falafel that is perfect in its flavor and texture (or at least perfect for here because I hear than none in the United States are really comparable to the ones in Lebanon). Short of visiting the Switzerland of the Middle East, though, I think this is one of the best.

The Hummus is also one of the best that I have found, although several others in El Paso are on par with the one here. Probably the main factor with hummus is that it be freshly made (as I believe this one is).

To me the other items on the plate give a variety of flavors and make it more interesting, although I did not find any that really stood out from ones I have had at other restaurants. Regardless of my critique, this is still a very good dinner.

Salads
The Lunch Salad was notable for being small but loaded with lots of good stuff (as I would describe it in technical food review terms). If the salad had not been as good as the other parts of the meal (meat, pita, rice, tzatziki sauce) I would not give this restaurant as high of an endorsement as I am doing.

The menu lists three types of salad including tabouli. According to the photos I saw on the menu, most of the dinner plates did not come with a salad. Two I have tried, though (the moussaka and the gyros platter) came with a salad.

Summing It Up
There are a number of good Middle Eastern restaurants in El Paso. I do not think Zino’s particularly stands out for this type of food except for the falafel (here it is one of the best). For a variety of really good Greek items, though, Zino’s really does not have any competition that I have found. The things that make the lemon chicken a good item (good flavor and quality in a dish not served in other restaurants) are likely to be the case for other items as well.

There is another location at 6590 Montana Ave. in El Paso (on the east side).