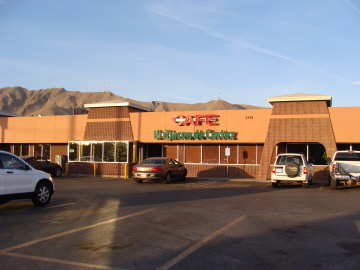 El Rincon de Cortez is a favorite lunch hangout in the UTEP area, located near the Sun Bowl on a street that is quite busy on game days and when classes are in session, but otherwise would not be called one of El Paso’s main drags. Instead, it seems that word of mouth brings consistent business to this modest restaurant.

With a second location now on the east side of El Paso, El Rincon de Cortez remains a favorite place to order Mexican steaks (in fact, I usually think of it as the place for Chihuahua style steaks). In the 1990’s I had the opportunity to visit the city of Chihuahua and go to one of the city’s most famous steak restaurants, so I have some point of reference for this type of cuisine. I do not think El Rincon de Cortez uses cuts of meat that are quite as good as I experienced in Chihuahua, but they are good nonetheless, and El Rincon offers so many good items to go with the steaks that it is a very worthwhile experience. The menu at El Rincon has a wide variety of items so that it is not exclusively a steak house, but I think the steaks are what set it apart from most other restaurants.

I also need to cite it as one of the city’s foremost places for Mexican breakfasts–they not only have items I especially enjoy but hours for the breakfast menu are extended to 1:00 p.m. on Saturday and Sunday. 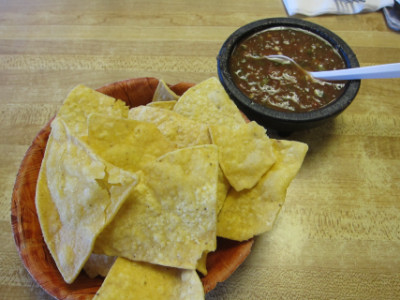 Chips and salsa are provided to each diner even before an order is made, and both are very good (but I think the salsa is particularly notable). 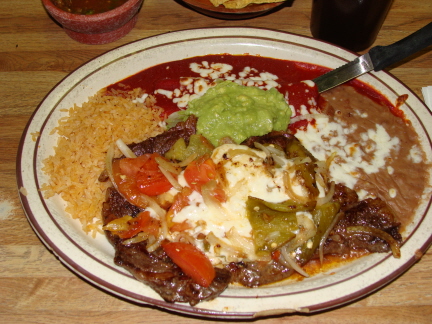 Most of the most popular steaks at El Rincon de Cortez are rib-eyes with different Mexican style toppings. The Tampiqueña Steak is one of the best, with a tomato, pepper, onion, and Mexican style cheese topping that is hard to beat. The Guacamole that comes with it is the only aspect of the dinner that I think could use some help, but the rice and beans have been delicious.

The Red Enchilada that came with the tampiqueña steak had a strong, earthy red chile flavor (as I have usually found it in northern Mexico), and was quite good.

I used to order the Chuleta Mexicana on a regular basis, and found the meat a little tough but the flavor delicious. This is a rib-eye steak topped with tomato, pepper, and onions, with guacamole on the side. I think they might add some extra seasonings to the meat to give it a different flavor from the tampiqueña–I thought it had a more distinct taste than simply omitting the cheese that is on the tampiqueña.

Flautas
I thought the Chicken Flautas were some of the best in El Paso, despite the fact that the guacamole was mediocre. The shell was cooked to just the right crispiness, and the white meat chicken chunks were very fresh. They are not stingy with the sour cream, as is the case at some restaurants. Even though El Rincon is famous for its steaks, it seemed that the chicken was even better in terms of meat quality. 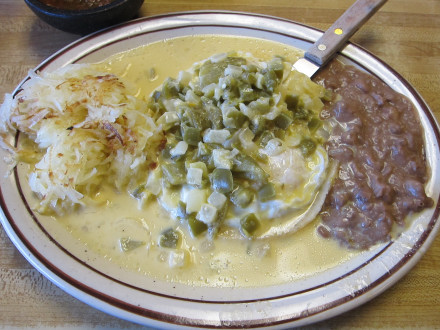 Huevos Rancheros come with very spicy green chile, a pool of queso, but no salsa other than the green chile. I think this is an excellent version, and one of the best in El Paso. The cheese sauce is what really separates it from others (I am not normally a big fan of cheese unless it is especially good, as I found the one here to be). 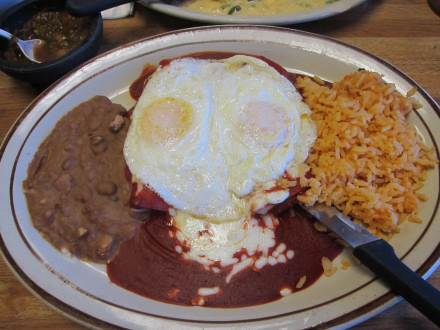 Enchiladas montadas from the breakfast menu

One seriously good item from the breakfast menu is the Enchiladas Montadas, or stacked enchiladas. The combines the earthy flavored deep red colored enchiladas with an egg on top in one of the few enchiladas where I think the egg really complements and helps the flavor of the enchilada. One reason I think the egg works is that the red chile is somewhat on the spicy side (and the egg yolk is able to tone it down as well as add a flavor that goes well with the chile).

The Hash Browns are excellent. The Beans are less greasy than most. The Rice always seems to be good.

Drinks
The Horchata was possibly the best in El Paso. It had a creamy texture, was well flavored with cinnamon, and was not too sweet. It would really be worth ordering just to get an idea of how a good horchata is supposed to taste.

Additional Comments
Prices are moderate, and I do not believe they use bad cuts of meat but they are not the most expensive either. It certainly gives customers the type of experience they would have in a family style steak restaurant in northern Mexico. It also allows people to have a good steak without breaking the bank.

Breakfast is the only time I have seen the restaurant packed with people, and obviously this is a very popular time for people to come. Other than the good flavor, what I like about breakfast is that it is not too expensive and I do not get so much food that it is then hard to enjoy lunch.