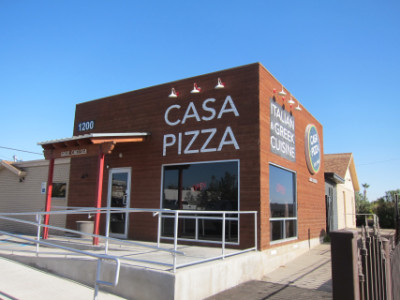 Open since 1987, Casa Pizza is not lacking customers, many of which seem to be “regulars.” I have heard that Casa Pizza began when the original owners of House of Pizza on Piedras split up, and that the owner of Casa Pizza is the one who developed the recipes at House of Pizza. Many people say House of Pizza has some of the best pizza in the city, and although I have not been there recently, I can confirm that it had excellent pizza when I used to go before 1987. Fortunately, though, the same pizzas are available at Casa Pizza.

Casa Pizza has had three locations: first on Magruder, then on Mesa Street, and it has now moved to Chelsea Street (near the original Magruder location on the east side). It says something about their food when their clientele has been willing to follow them to all of these locations.

I used to describe the food as pizza and Greek food. Actually I was surprised on my most recent visit to discover that the list of Greek dishes is really quite limited. They do have several Italian dishes (I do not think I have tried any of them), but the pizza and Greek food are what I have really enjoyed here. I am fairly certain that most people come for the pizza.

Pizza
The owners of Casa Pizza say everything is made with “all natural ingredients.” Pizza is one of the foods with the highest potential to cause me stomach problems, so the fact that the ones here “sit well” with me is probably due to the natural ingredients.

Even though the flavor of a pizza is less important to me than how well my body can tolerate it, the pizzas here have the flavor and quality that have earned them such a loyal following. The crust, sauce, and cheese are all top notch. Outside of the pizzas that are wood fired (at Cafe Italia) and New York style (formerly at Hello Pizza but I don’t know if there are others who now do NY style), the ones here are probably the best in town. At least that has been my opinion since I first tried Casa Pizza, and House of Pizza before that. 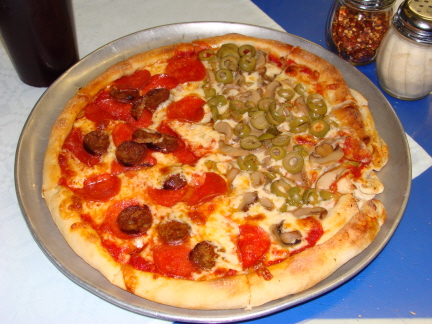 Pizza with one half pepperoni and sausage, and one half green olive and mushroom

The toppings, though, do make a difference. In the pizza pictured above, I thought the half with pepperoni and sausage was outstanding, with excellent flavor and good quality meat. I have gone through long periods of staying away from pork products, and have tried various vegetarian toppings and other types of meat. If your objective is to get the best pizza at Casa Pizza, though, I would say to order the sausage and pepperoni. The pepperoni was fresh and moist (in some restaurants it is dried up almost like a chip). The sausage also had a good flavor, and was not overly spicy.

The olive and mushroom pizza, on the other hand, was a letdown in terms of the flavor. I think the problem here is that you cannot order a “vegetarian” pizza–instead patrons can only choose individual toppings to add. With green olives, black olives, and mushrooms being about the only choices, I think any of these would leave the pizza with the flavor of the chosen vegetable, and not much else. I did not think the olives or the mushrooms were particularly flavorful. In the case of vegetarian pizzas I would probably point to Ardovino’s as serving the ones with the best toppings. 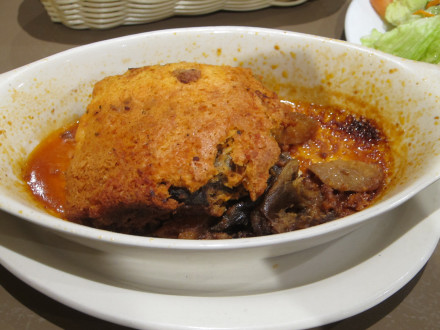 Even though Casa Pizza is justifiably famous for its pizza, I think its best feature is the Greek food. I first tried Musaka in a Greek restaurant on the Houston Ship Channel, and found a very good version in a Greek restaurant in downtown El Paso when I first came to the city. Since that time, though, I think Casa Pizza has come the closest to capturing the essence of this dish as I originally experienced it. The eggplant was cooked so that it was neither too hard nor too soft, the spices were right, and the crust tasted perfect to me. The dish came with ground beef that was not terribly appealing to me, but I know this is the way musaka is supposed to be made. The meat was cooked well, and I thought this was an excellent dish.

Casa Pizza has a rather limited Greek menu, and gyros is the other Greek entrée available, but I do not remember having tried it.

Salads
House Salad comes with the musaka and some of the Italian dinners, and is one of the best I have eaten in El Paso. The salad is made with fresh greens, feta cheese, and a delicious dressing. The other toppings added extra flavor rather than just serving as bulk. 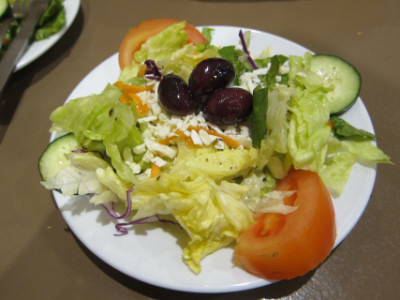 For pizza and some other items, though, if you want a salad it will cost extra (but several types are available). The Greek Salad seemingly had all the same ingredients I remembered from the house salad, and was somewhat of a letdown because it was more expensive. 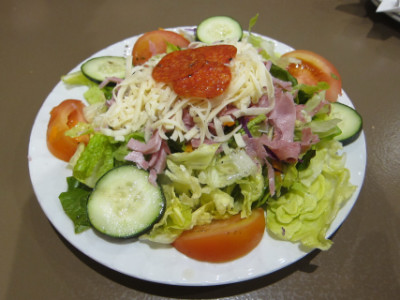 The Antipasto Salad is another choice on the “5 dollar menu” (I am not sure of the exact price), but in any case these are salads you can buy if your meal does not come with a salad. Like the Greek salad, it seemed like a letdown for the money I paid (but was still good).

Summing It Up
This is mainly a pizza restaurant, and the pizzas here are reasonably priced. The large pizzas seem to be particularly good deals for families who are on a budget. I would caution about ordering a salad, though. I questioned whether I was getting my money’s worth on the salads that did not come with the meal.

The musaka is one of the top ones I have had anywhere, and I really cannot overstate how much I like this one particular dish served at Casa Pizza. I have since tried the one at Zino’s (a popular Greek restaurant in El Paso) and I still say that Casa Pizza’s version is my favorite.