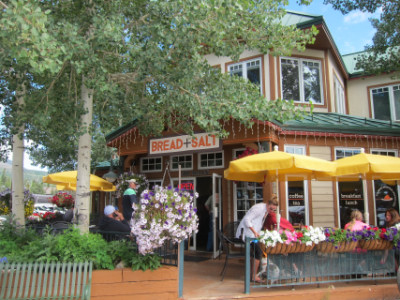 Frisco is one of the popular ski towns in the Vail area, but it also seems to have quite a substantial year round population that support some very good amenities such as Safeway and Whole Foods grocery stores, as well as a number of restaurants. Possibly the biggest disappointment of coming to Frisco is that you will not be able to try all the restaurants that look good, and even if you were able to do so there are always the neighboring towns of Dillon, Silverthorne, Breckenridge, etc. that would offer their own challenge. By the way, my friend who traveled with me on this trip went to the The Lost Cajun and recommends this restaurant very much as having a true (not touristy) flavor.

Bread+Salt is another restaurant that is not touristy in the sense of being dumbed down. I am speaking primarily of items they serve such as huevos rancheros that have a true south of the border flavor. I would go further and say they are like the food you find in alta cocina restaurants in Mexico, the type of restaurants from which chefs like Rick Bayless get their inspiration.

Every restaurant in Frisco seems to be crowded, particularly at breakfast and right at the lunch hour. I have heard that many times you need a reservation at Bread+Salt but when I went in the late morning it was busy but not full. The breakfast menu is served until they stop serving the regular menu at 2 PM (their web site says they serve burgers and beer from 2 to 8 PM). I think they are known for their breakfasts, and they have quite a range of choices. There is a large outdoor patio, and in nice weather the dining room has the feel of being outdoors because they leave the doors open to let in the outside air (when you are in Frisco I think you will want as much of the outside air as you can get). 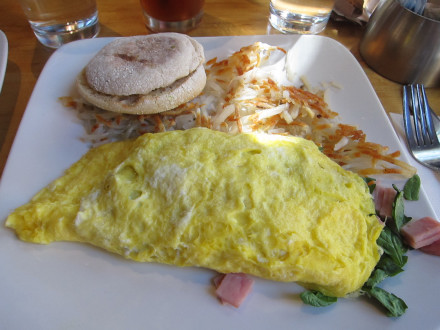 As much as I liked the huevos rancheros that I sampled, the Frisco Omelet with Fixings was the highlight of the meal for me. It had three eggs, which was more than I thought I could eat, but in full disclosure I ate part of the omelet and part of the huevos rancheros, so I am not sure about how filling each one would be if you ordered it alone. You get “fixings” with it that are not cooked into the omelet, but rather stuffed inside so you can either eat them with the omelet or separately (this made more of an impression on me that I would have thought, having the items cooked into the omelet in all of my other experiences that I can remember). The quality of the food at Bread+Salt is top notch, but I think the recipes they use and the way they cook the food is the other vital ingredient that makes this a memorable experience.

My fixings were black forest ham, Sonoma goat cheese, and spinach. Either I miraculously stabbed in the dark and found a very good combination, or the restaurant has a way of taking anything you order and making it good. Afterward I was glad that they let you choose your own ingredients and do not just offer their own combinations that they think would be good. 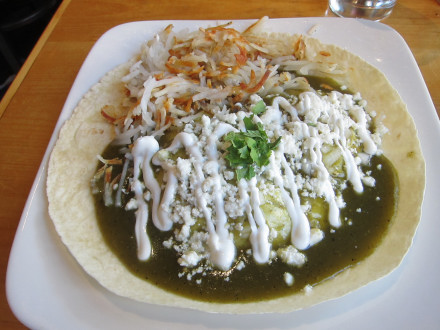 I was very afraid that if I got something like Huevos Rancheros in Frisco it would be the tourist version, but fortunately I got some good information from the desk clerk at the hotel (whose father is a chef at Bread+Salt) that I should try the ones here. As I mentioned in the introduction, these have a very Mexican flavor. Specifically they come with black beans, queso fresco, poblano green chile, and crema mexicana. My thought in tasting it was that it was really good, but another thought was how things have changed so that they can get a regular supply of poblano chile, queso fresco, and crema to allow an item like this to be on a restaurant’s menu. It is also available with red chile (red chipotle) which I believe is really hot, but in my mind the green poblano chile was plenty spicy enough and had an excellent flavor.

I think if you come here for breakfast, it might be your lunch as well. I say this not only because of the quantity they serve, but the price is a little bit high and you might not want to spend any more money for lunch if you are satisfied with the breakfast you had (this is the way I felt). There is also the fact that the omelet comes with bread, and they have a very good jelly on the table that makes this almost a meal in itself.

The restaurant’s web site says that they have a sister restaurant named Bagalis at 320 Main St. where you can get dinner. They also have a restaurant in Breckenridge named DOMA 1898 at 270 N. Main St. which is open 8AM to 2PM for breakfast & lunch, and until 8PM Wed-Sun.

Cuisine: Breakfast, Sandwiches
Cost: $$
Hours: Open Daily 7AM-2PM (Open 2 to 8 PM for burgers & beer)
Accessible: Yes
Smoking: No smoking
Alcohol: Beer, and I am not sure what else