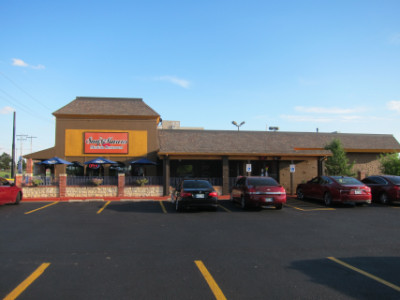 San Marcos has a story that is similar to the ones of other local Mexican food chains. It started out in south Oklahoma City and then expanded to the north, correctly surmising that there would be a market for Mexican food even in areas that had small Hispanic populations. I believe San Marcos now has two branches on the north side, while other local mini-chains have similar numbers.

My experience with the restaurant at N.W. 122nd St. and Rockwell Ave. is that it underwent a fairly major transformation around 2013 when it got new management. My previous review documented many of the issues I had with the old restaurant. I think it is now a much better restaurant although I think some of the items that I found to be bland and Americanized are still that way. I do not know whether the new restaurant added some more authentic dishes or whether it was a matter of my discovering that they were there, but I am very impressed with some of the items they are now serving.

One strategy to follow is that the menu has a picture of a bull’s head next to items that it considers to be its specialties (although with my poor eyesight I thought it was either an angel or a man wearing a robe such as Moses leading God’s people out of the wilderness). In any case, it led me to some of the best dishes at the restaurant.

One noticeable change in the food, though, was in the extras (chips, salsa, rice, beans, etc.). The chips made the biggest improvement, going from something I would not eat to chips that were some of the best in OKC (and which would hold their own even in a place like El Paso). The rice and beans are still lagging but they are better than they used to be. The cheese dip is another item that I find to be good while before it was something that I generally did not touch.

A discussion on OKC Talk gives some information about San Marcos that helps to explain my experiences. It states that the different San Marcos locations are owned by different family members, and each one has their own take on the restaurant. I will have to say that I have been to the Warr Acres branch of San Marcos and I generally thought the food there was more authentic. Now that I am very familiar with the way the Rockwell location prepares different dishes, though, this is where I would come when I wanted some of the special items that I know San Marcos can prepare. (Bonus: I will even point out what they are in the following review). 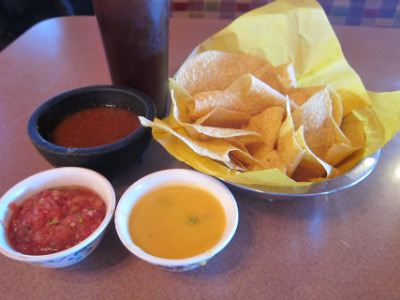 The Chips here are solid and I certainly do not have a problem taking home the leftovers.

The Salsa is the wimpy version, which is a disappointment compared to restaurants such as Abel’s who seems to spice it up just the right amount. The solution for me at San Marcos is to order the Spicy Salsa, although I think it still does not match the salsa at Abel’s and others in terms of flavor.

I used to have a problem with the Oklahoma style Cheese Dip served here and at other restaurants because it is nothing like Mexican style chile con queso. However, it has now improved to the point that I enjoy it with the chips whether or not it is truly authentic. 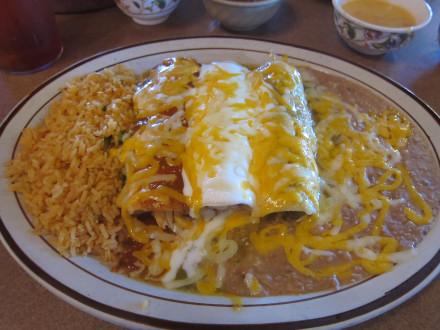 One item I enjoy here is one that is not on the menu, which at other restaurants is called the Bandera Mexicana (Mexican flag). These are enchiladas with the colors green, red, and white on top (from green salsa, red salsa, and sour cream). Because it is not on the menu it does not have an official name by which you can order it. I just try to explain it to any server who does not know me and usually they are able to work it out. It costs the same as any other order of enchiladas, but I think this one is more interesting. An alternative would be to get two enchiladas–one with red sauce and one with green. Here the sauces seem to be made in house every day and there is enough of a human factor that I never know whether the red or the green will taste better (and they are much the same in terms of spiciness).

The green sauce is tomatillo and the red is made with guajillo peppers. Both are moderately spicy. 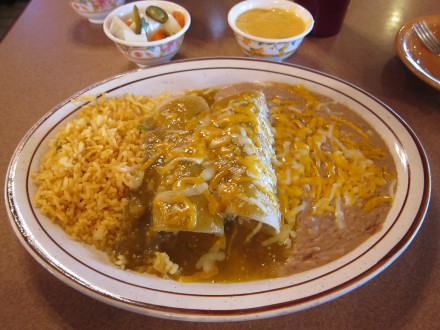 Two chicken enchiladas from the lunch menu with green sauce

The lunch menu has two choices for enchiladas, either “two enchiladas” or the Two Chicken Enchiladas shown in the photo. They usually serve it with their Tex-Mex style “chili”, but you can request red or green sauce, sour cream, or possibly other possibilities. With any topping, though, I find that the chicken enchiladas are better than the cheese version. 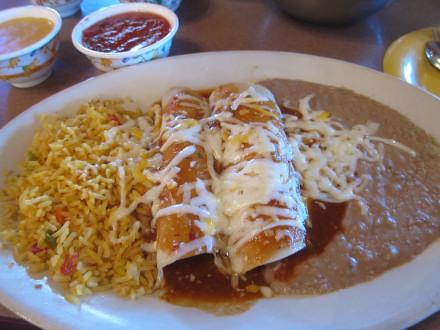 The above photo shows the Chicken Enchiladas lunch special with red sauce. The menu does not mention the choice of sauces that are available, but the staff is happy to accommodate you if you ask. 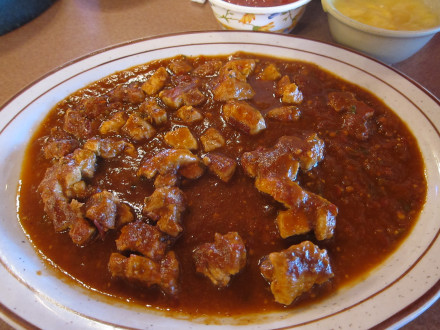 The Guisado comes with red, green, or entomatado (non-spicy) sauce, and is normally made with pork but it is also available with chicken, fish, or shrimp. I think the red sauce is the same one they put on enchiladas, but there is much more sauce on this plate and thus it is noticeably spicier. To me this is the advantage of ordering the guisado, but the disadvantage is that it is more expensive than the enchilada plate. Also I frequently find the pork to be a little tough (I do not know if it came that way or whether they cooked it too long). I do like the flavor of the pork, though, with this chile. 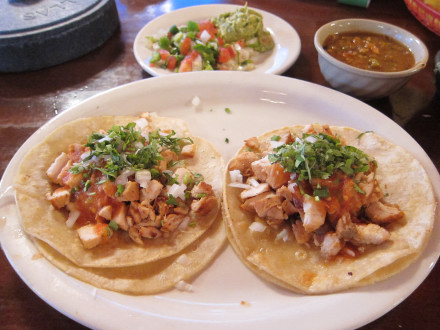 Many people comment that they like the fajitas here (made with beef), but the Chicken Fajitas are also quite good. At the time I ordered these it was listed as “Street Tacos,” but now I think you can order it on the “Mexican Tacos” section of the menu. This comes with soft tortillas, onions and cilantro and your choice of meat. 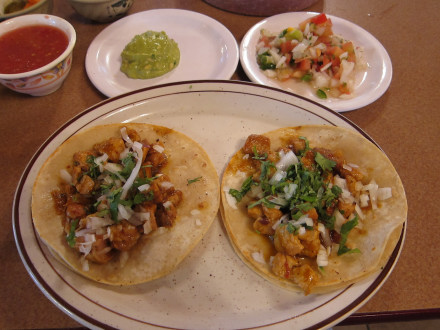 I would say that out of the tacos I have featured the chicken is good but the Pork Tacos are better. Especially when the condiments are added (guacamole, pico de gallo, salsa, etc.) this is quite a flavorful meal. It seems that most of the time they do not charge me for the pico de gallo but sometimes they do, and most of the time they charge me for the guacamole but sometimes they do not. 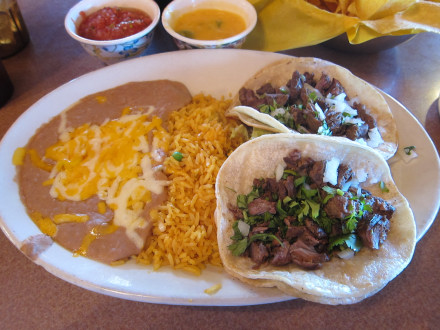 The best tacos I have tried so far, though, are the Tacos de Carne Asada. They also have tacos al carbon which may be better, but I have been happy with the carne asada. I have since tried these tacos at other restaurants which have shown me that carne asada is one of the best meats you can order at Mexican restaurants, but many others do not do it as well as San Marcos.

I started out always asking for the red guajillo sauce to put on the tacos (the same sauce they use on the enchiladas). However, I later favored a combination of lime, guacamole, and the cilantro and onion which are already sprinkled on top. The tacos do not automatically come with anything except the cilantro and onion, but the waiters are the ones who suggested the lime (and there is no extra charge for this or the salsa). 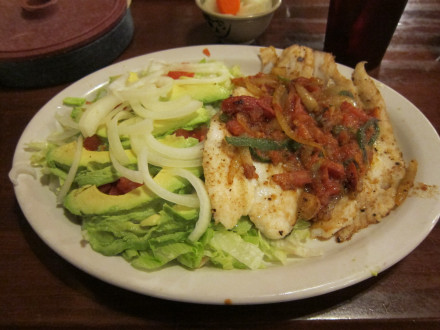 The Pescado a la Veracruzana was quite good, although fish is not something I generally crave unless I am near the sea coast. By the flavor I figured this fish was tilapia, and the topping complemented it quite well. It did not have any olives, which I like to have in a veracruzana dish. I really liked the fact that I could substitute an avocado salad for the rice and beans that normally come with the dish (although San Marcos’ menu shows both choices as side dishes on their fish plates). 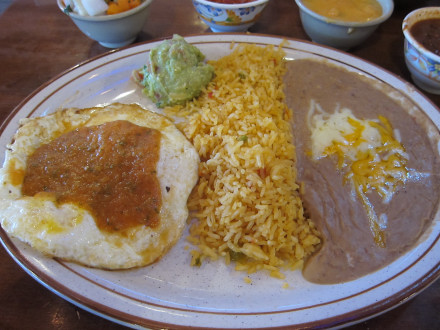 It is a little strange that they offer breakfast dishes when they are not open for breakfast, but one time when I wanted a “late” breakfast I availed myself of the Huevos Rancheros served here. The sauce was very good (maybe even better than the red and green sauces they use for the enchiladas). However the eggs were overcooked for the way I ordered them and I wished it had come with hash browns instead of the rice and beans (or at least the Mexican papas you can get as a side dish on some plates). 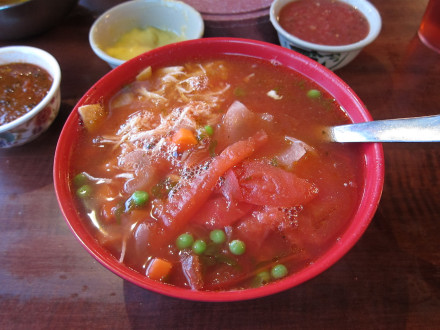 The Chicken Tortilla Soup was actually very good although it seemed to be lacking in tortillas and the ones they had were very soggy. I do not think this is even a criticism, but just pointing out that this does not seem to be the way they traditionally make tortilla soup in Mexico. 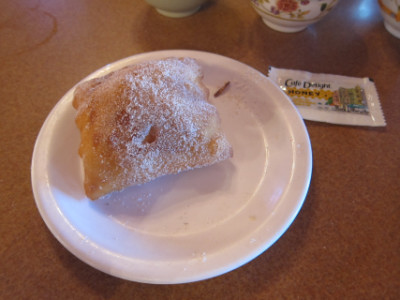 San Marcos has several desserts you can order, but the one that is always free is the Sopapilla. Like the chips and cheese sauce, this is something that I have come to like much more of late.

Other Observations
There are a handful of items here that I think are quite good, and could match up with the Mexican food served just about anywhere in the United States. Probably number one on this list is the tacos de carne asada. Many people also like the fajitas and other items but I have not tried them personally.

The enchiladas are the other main item I like to order here. These are very good for Oklahoma City, but not necessarily when compared to others around the Southwest. For me, though, the important thing is to get the red or green enchiladas (or both) rather than the generic one which is Tex-Mex style. Also I think the chicken enchiladas are best.

One thing I have not yet pointed out is the issue I have had with consistency. Sometimes the food seems better than at other times (fresher, more flavor, etc.). The most inconsistent items have been the enchiladas and other dinner plates that have several elements they have to cook (including rice, beans, etc.). On the other hand, the tacos always seem to be consistently good when I order them. The trick there is to make sure you get the toppings or condiments you want, and this usually is a matter of getting the wait staff to bring it to you.

Another tip I would give is to go at lunch if you can. Their lunch specials are good until 4:00 p.m. and you do not save a whole lot of money, but every bit helps. On the lunch menu they just have generic enchiladas and other items, but you can customize them the same way you can on the dinner menu (red or green sauce, etc.).

Those like me who are budget conscious can also save some money on the dinner menu by sometimes getting a small order (such as two enchiladas instead of three) or omitting the rice and beans. In other words, they have a lot of flexibility in giving you special requests. 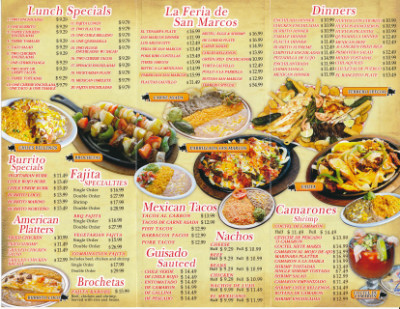 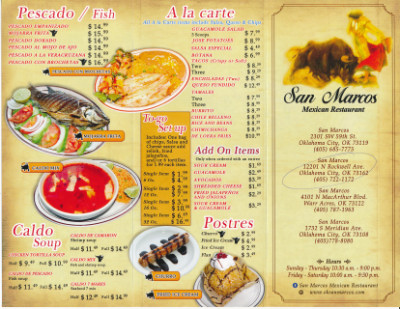