Charleston’s is a chain out of Oklahoma City that is now located in six states (not all of them contiguous). The Internet gives several descriptions of the food (steakhouse, American, etc.). I would describe it as an American restaurant that has steaks. I have thought of it primarily as a place for sandwiches or an American plate dinner such as oven roasted chicken. Their “specialties” include chicken fried steak, which I ordered on my most recent dinner here.

Prior to this experience my most recent visit to Charleston’s was in 2015 at the Memorial Road location. My notes indicate that I really liked the salad (this should be the case since the house salad is $14 on the current menu, and prices go up from there for the other salads). The parmesan crusted chicken on Memorial Road was very good in terms of quality, but I thought it was a flavor experiment that went a little bit awry. I do think Charleston’s tends to me more of a “New American” restaurant with an “elevation” of the flavor, but this works out better for some dishes than for others.

The Reuben sandwich at the Memorial Road restaurant was good but expensive. I was not a huge fan of the key lime pie because of the fact that it had a high whipped cream content compared to the “lime” part.

Steaks are the one item at Charleston’s that do not seem expensive to me compared to other restaurants, and perhaps this is a reason many people think of it as a steakhouse. I did note on the menu, though, that the only steaks available at this location are top sirloin and hand cut filet, along with prime rib. 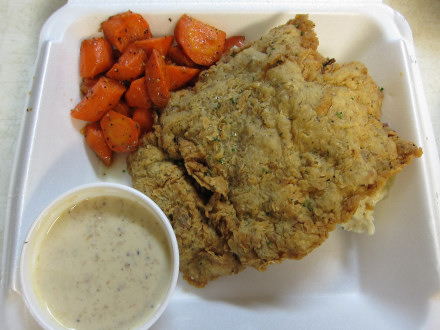 On a delivery order I chose the Chicken Fried Steak, listed on the menu listing it as one of their “Specialties.” Based on these items I think Charleston’s could also be classified as having Southwestern cuisine, with choices such as barbecue ribs and a catfish platter. I think my order was probably packaged with the expectation that it would be replated, since the mashed potatoes were underneath the chicken fried steak. Although the potatoes are not visible in the photo, there was a substantial portion. The black pepper chipotle gravy was excellent on both the steak and the potatoes.

I considered this dish as being another one of Charleston’s flavor experiments, and in this case it was one that worked. The chipotle gravy was not terribly spicy, but it had a little kick. This was a high quality dish that was a little bit unconventional, but I liked it and was glad to be able to splurge a little bit on a high quality meal.

Other Observations
The prices at Charleston’s have kept me from trying a lot of the items on the menu, especially when I found some of them to be a bit of a disappointment.

They obviously do have some very good dishes, though, with the chicken fried steak being an example. I am fairly confident that the steaks would be another “must try” item.