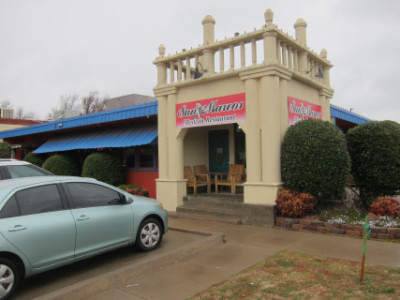 San Marcos Mexican Restaurant currently has five locations, with “Number 4” occupying the building which was formerly Los Amigos Restaurant in Warr Acres. Los Amigos served a style of food which came from the state of Aguascalientes in Mexico. What I have understood from several restaurant owners is that many if not most of the Mexican restaurants in Oklahoma City serve this style of food at least when it comes to their authentic dishes (most of them also make the Tex-Mex and Americanized dishes available as well).

San Marcos has a similar flavor to these other restaurants, but I think its authentic menu is limited compared to some other places (particularly to Los Amigos which it replaced). A specialty of San Marcos seems to be large meat plates and other items which I think require a pretty good appetite in order to finish. There are smaller options here, but one thing which I actually think is a big plus for the restaurant is that you not only get a good portion of food but also free chips, tortillas, queso, sopapillas, and several types of salsas and condiments with the meal. The extra spicy salsa is freshly made in the kitchen and comes out heated to the table.

I have been to the restaurant on Rockwell (San Marcos No.3) more times than I can count, and I do think that many of the items are very similar at both restaurants. Over the years the Rockwell restaurant has dropped some of their special authentic items due to lack of demand, while the Warr Acres restaurant appears to have a larger Mexican clientele who would order these items. The menus of all San Marcos Restaurants are the same, and the differences would mostly be in the non-menu items that are available. One example is some special enchilada sauces which used to be available at the Rockwell location but which have now been discontinued. I do not know what special items the MacArthur (Warr Acres) location has, but I think it is likely to be more than at Rockwell. 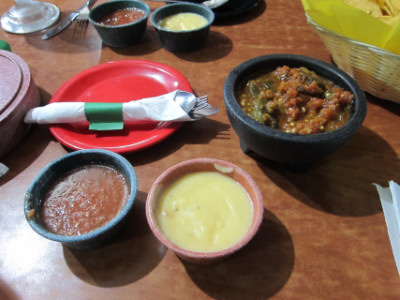 I do not really bother with San Marcos’ regular salsa, which looks like chopped up tomatoes, but I think the Spicy Salsa is excellent, and to me it is better than at the Rockwell location. It is freshly made and served hot (and comes close to the quality found in El Paso restaurants).

The chips and queso dip are both good. I also like to order the corn tortillas. All of the setups are free, but in the case of the spicy salsa and tortillas (either corn or flour) you have to request them. 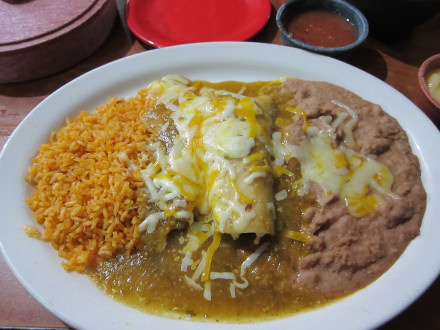 The Enchiladas with Salsa Verde are one of my favorite items at the Rockwell location, and I tried them here for comparison. My judgment was that the green sauce was a little bit better here, but they did not give me very much of it. Overall I liked the food better here, but the difference was not very pronounced. The spice level here was about the same as at the other San Marcos location, which is about four out of five chiles for the green sauce.

One flaw I found here was the the cheese did not seem to be quite melted enough (something I really have not noticed at the Rockwell location). 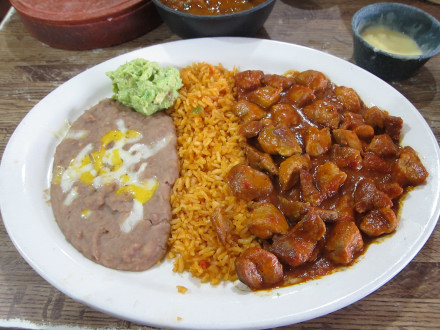 Guisado is one of the more expensive items at San Marcos, and one for which it takes a pretty good appetite to eat. I liked the red sauce version of this dish, although the meat seemed to be a little tough. Sometimes the Rockwell location also serves tough meat, but my experience at San Marcos is that this is not the norm. 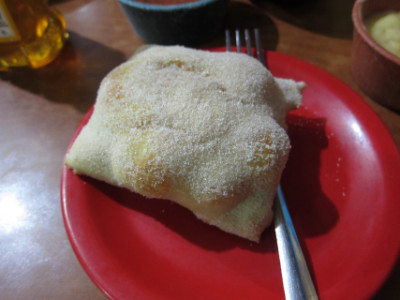 The Sopapillas here are free, and I think are very good as long as you are not expecting them to be like they are in El Paso or New Mexico. The ones here are sprinkled with what looks like a sugar/cinnamon mixture, and I usually like to add honey as well.

Other Observations
The best feature of San Marcos is that it seems to be improving over time. One example is the chips which have improved drastically since I started coming to the restaurant. The enchiladas with red or green sauce are also very reminiscent of the ones you would get where they serve authentic Mexican food, and they are always available (they are in the “La Feria” section of the menu).

The Warr Acres restaurant was similar enough to the Rockwell location that I think the food is about the same at either place. I do think the spicy salsa is better in Warr Acres, and I suspect that they have some non-menu items that you can order. What I discovered from the Rockwell location was that they kept the non-menu items going as long as people kept ordering them, so I do not know what is popular at the Warr Acres location now.

There are three other locations in the OKC Metro, and I suspect they follow the same pattern of having much the same food but possibly their own non-menu items.

Note: The “Chile Index” refers to the ranchera and similar sauces (the salsa verde and salsa roja are spicier).