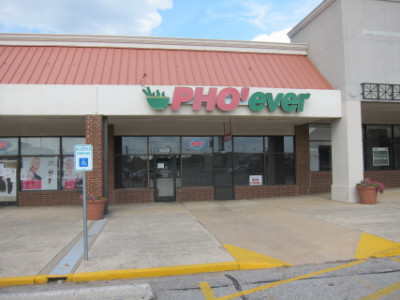 I believe many large cities in the United States find that Vietnamese food is one of the most widely available and most popular ethnic cuisines which has popped up recently. Oklahoma City was ahead of the curve, though, with its Vietnamese community being the driving force behind the development of the city’s Asian District as well as making Asian food popular in the suburbs.

I am not sure when Pho’Ever opened because when I was visiting my parents we usually headed to Kim Wah in The Village, an outgrowth of Lido Restaurant in the Asian District, for Vietnamese food. Shortly after I began writing about restaurants in 2005, though, I became aware of Pho’Ever, a strip mall Vietnamese restaurant located at Northwest Expressway and Rockwell. Since that time it has had the same owner, and this had led to a level of consistency that I do not often find in a restaurant of this longstanding. At the same time, though, it is not a “family” restaurant in the sense that the husband cooks and the wife is the receptionist, or vise versa, but rather other people are employed in the kitchen to do a large share of the cooking. Part of the strategy was that the restaurant served both Vietnamese and Chinese food, and an effort was made to employ people who were experts in each type of cuisine.

Prior to 2013 I think the Chinese food was mostly keeping the restaurant afloat, and I observed a large proportion of the customers ordering this type of food. At this time, though, there was a change of personnel in the kitchen. This was made evident by the samples of Chinese food I had (and which I occasionally ordered) and was confirmed by the staff that they now had new people cooking. In my opinion the Chinese food went way downhill at that time and has not recovered to its previous level (which for some items was actually pretty good).

I am not an authority on the Chinese food at the present time simply because it has been years since I have tried any of it. What I can say, though, is that the Vietnamese food has maintained its quality and could possibly be the best it has ever been. In 2021 I even discovered what I think is my new favorite dish here (details later on in the article). 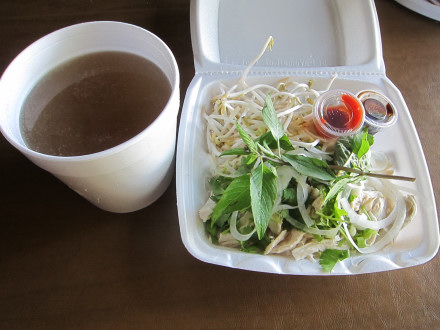 Pho ga in a takeout order

I have tried several versions of pho here, and all have been good (although I think it is better in the Asian District). Perhaps the best is the Chicken Pho (pho ga), and in fact this was the owner’s recommendation to me when I asked which one I should order. It took a while but this was my new discovery in 2020. 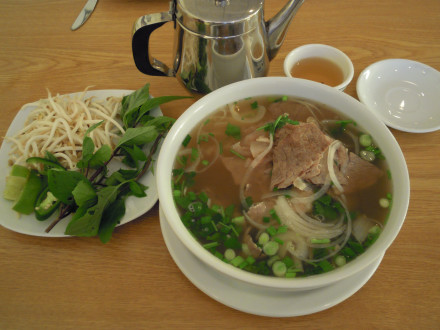 To me, though, the regular Pho had its own merits. The meat and vegetables were quite good. The broth, although probably the weak point compared to the Asian District, was good as well. The one shown in the picture was from the lunch menu. 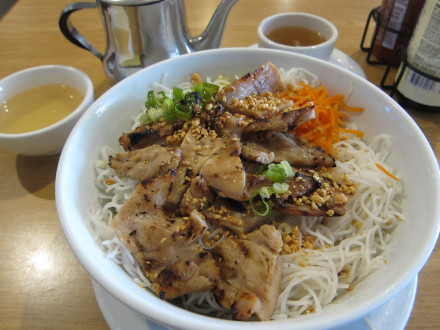 The Vermicelli Bowl with Grilled Chicken is the dish I have ordered most often at Pho’Ever. It comes with the restaurant’s home made fish sauce which I think is not as authentic as some in the Asian District, but it is good nonetheless. It does not come with mint, and the amount of other condiments (peanuts, carrots, etc.) varies, but the basic elements (chicken, noodles, fish sauce) are all good. I would say, though, that the chicken especially stands out from others in Oklahoma City, particularly others in suburban areas. 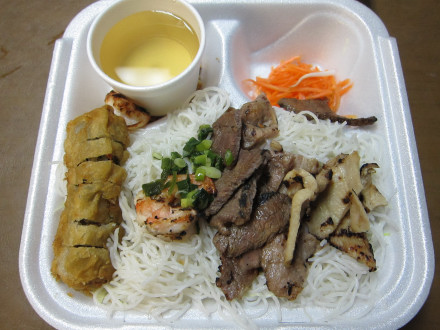 In 2021, though, I found what I think is the best vermicelli dish, namely the Combination Vermicelli Bowl. I enjoyed the chicken, beef, and shrimp, but what I thought was really memorable was the Vietnamese spring roll. I do not think my order had pork which according to the menu it should have, but I had asked for something else and then changed my order, so if there was a mix-up I do not blame the restaurant for it. However I did not get chile sauce with the order and although I forgot to ask for it, I do think a small packet of it should be included in vermicelli bowl orders as a matter of course.

Honestly, though, the combination vermicelli bowl was so good I would enjoy it even without chile sauce (but I happened to have some at my house which is probably why I subconsciously forgot to order some from Pho’Ever). 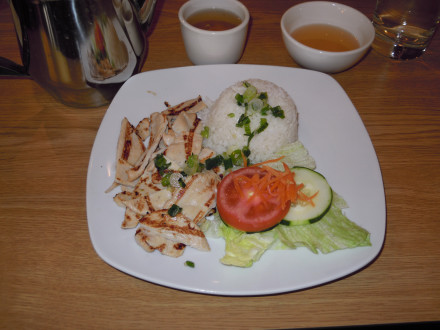 Rice platters are very much like vermicelli bowls except that you get tomato and cucumber instead of peanuts and the mint that Pho’Ever does not use anyway. The fish sauce comes with both types of dishes.

Although I enjoy the other meats I think this dish (like the vermicelli bowl) is probably best with chicken. 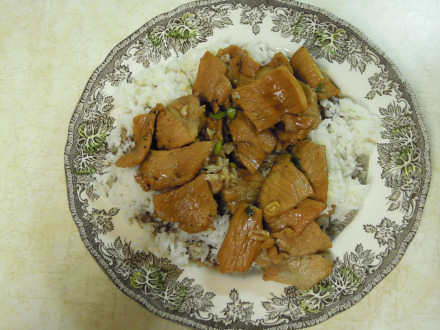 I have tried some of the clay pot dishes, including the Pork Clay Pot, but I found the sauce to be very sweet. Lacking the vegetables that come with either the vermicelli bowl or the rice platter, I did not think the clay pot was as good of a choice. I did think, though, that the meat was very good. 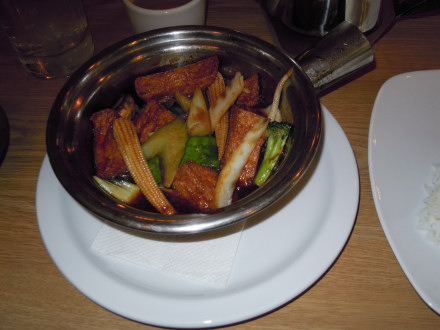 The Tofu Clay Pot was also very good but I did not think it was quite filling enough for the type of meal that I usually have. For a light meal, though, I think this is better than the pork in terms of getting a better combination of flavors. 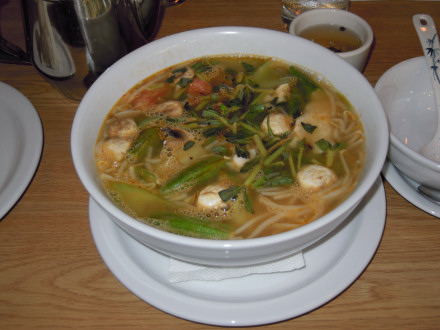 One item I like is Canh Chua, which the menu describes as a sour soup indigenous to the Mekong River region of South Vietnam. In fact, Pho’Ever is the only restaurant I know that serves it. I originally tried it at Kim Wah which was an offshoot of Lido. I think it is on Lido’s menu but I do not know if Lido will even reopen after their closing in March 2021 and slated transfer to new owners.

Special Items
The restaurant for a while offered special items such as Bun Bo Hue which I thought was one of the better ones I have tried. I think this and the other traditional Vietnamese dishes they served were an experiment to see if this type of food would sell in the northwest OKC suburbs, and apparently they decided that not enough people ordered them. I think Pho’Ever was ahead of the times, though, because other suburban restaurants such as Pho 54 are offering some more traditional dishes than was previously available outside of the Asian District.

Some Closing Notes
Although this is a Vietnamese and Chinese restaurant, I do not order Chinese food here. In about 2014 they had a change of cooks for the Chinese food and what I have tried since that time just does not have a Chinese flavor to me (in contrast to the Vietnamese food which I think is very good and has actually seemed to improve since about 2014).

Some other suburban restaurants have a larger Vietnamese menu with more authentic items, but one area where Pho’Ever is very competitive is with the vermicelli bowls. I know they can make other very good dishes as well (such as when they had bun bo hue) but this location does not have a customer base to support a wide ranging menu at this time. I think it might happen in the future, though, particularly now that the pandemic seems to be winding down.

I should also point out that the jasmine tea made with loose leaves has been one of the biggest reasons I have come to Pho’Ever so many times. Several other restaurants used to serve this type of tea but have switched to the usual tea bags, and I appreciate the ones who do it the right way.