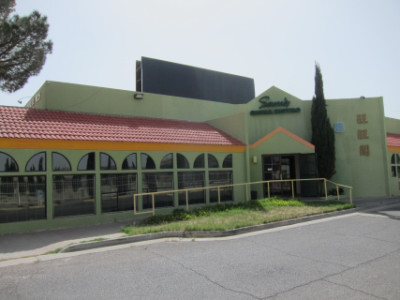 I think I should begin by repeating the introduction to the review of Sun Garden Chinese Bistro:

When Sam’s Chinese Restaurant opened on Yandell Drive it was a groundbreaking moment for El Paso, not only because it offered truly authentic Chinese food but also because the people of the city embraced it. Now chef Mike Wu, one of the original owners of Sam’s, has his own restaurant on the west side called Sun Garden Chinese Bistro (another one of the original owners has moved Sam’s Restaurant to Dyer Street and his wife operates Red Lantern in east El Paso). While each of the three current “Sam’s” restaurants has its own menu items and recipes, the original traditional Cantonese style of food can be found at all three of these restaurants.

Bob, one of the original partners at Sam’s now operates the new Sam’s on Dyer Street, while his wife Sharon manages Red Lantern on the east side. Both of these restaurants follow the tradition that the original Sam’s Restaurant started, but I would say each one has a slightly different focus. 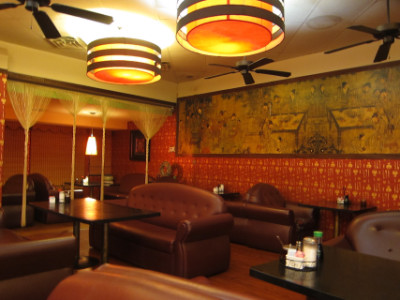 The new Sam’s on Dyer Street does not have an authentic “Chinese menu” as such, but it does serve quite a few traditional dishes (in this regard it is much like the original Sam’s). The “Chef’s Specials” on the current menu has the greatest concentration of authentic dishes, although this type of food can also be found elsewhere on the menu. I would say that Red Lantern makes it more clear when you are ordering from the “Chinese menu” and which dishes are more Americanized, although at both restaurants there is a very strong adherence to Chinese cooking methods in all of their dishes, and the “Americanized” part of it may be in subtle changes such as the vegetables they use, etc. Probably the biggest difference between both of these restaurants and many restaurants in the United States is the relatively small number of dishes they serve which did not originate in China or are relatively unknown there such as General Tso’s chicken (this dish is served at Sam’s but is one of the few examples of this type of dish that I can find).

My number one tip for Sam’s Restaurant is to ask Bob or the wait staff for suggestions. Their tips have always been ones that have not only directed me to the dishes that are authentic, but also ones that have been very good.

In collecting my notes to write this review I found a large number of five-star dishes, making this one of the top Chinese restaurants in the city. The prices are also extremely good, and the portions are very generous (more than once I have taken home the part of the meal I could not eat). I would say that of the three restaurants that grew out of the original Sam’s the ones that have had my favorite dishes are Sun Garden and Red Lantern, but Sam’s on Dyer is where I have most consistently been able to order a variety of dishes with all of them being good. 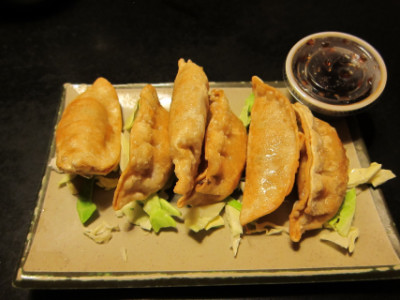 The appetizers have so far been the least impressive part of the menu to me, and I think all of them are pretty much Americanized (with the exception of the steamed dumplings which I have not yet tried). A friend of mine made a meal off of the Fried Dumplings, or I think it would provide appetizers for a whole table. 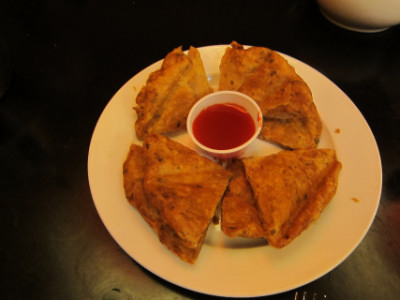 The Onion Pancakes had a good flavor but they were crunchy, and the best ones I have had were softer than the ones that Sam’s makes. 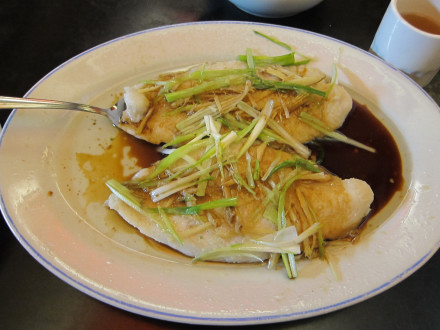 The “Chef’s Specials” section of the menu seems to be the largest single source of authentic Chinese food on the menu. So far everything I have tried has been excellent, including the Steamed Fish Filet which Bob recommended to me based on what I used to order at the original Sam’s. Restaurants that serve fish in El Paso really have to prove to me that they have a good source of fish, and I was very satisfied with what I had at Sam’s. The ginger, onions, and black bean sauce were excellent as well. 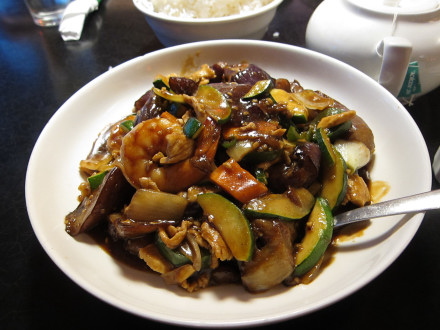 Sam’s Spicy Eggplant was not all that spicy, but it was a taste treat. I particularly liked the chicken and the basil, but most of all Sam’s “special spicy sauce” became one of my favorite sauces at the restaurant. 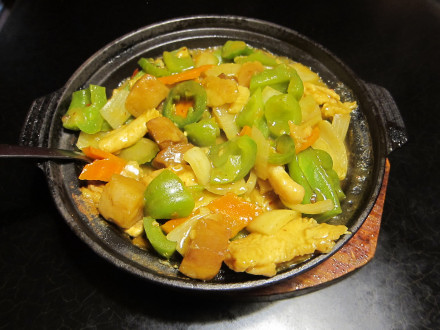 The Curry Chicken is a good dish to order if you want it to actually be spicy (several items are said to be spicy, with a red chile on the menu next to the dish’s name). This dish was as spicy as the Indo-Chinese dishes I have had at Indian restaurants, but with a Chinese flavor (even though the curry gives it somewhat of an Indian taste). It is just the opposite of the Chinese food in Indian restaurants that use Chinese ingredients but still have an Indian flavor. Just for this alone it was interesting to order the dish here, and I enjoyed the balance of flavors that Sam’s uses. 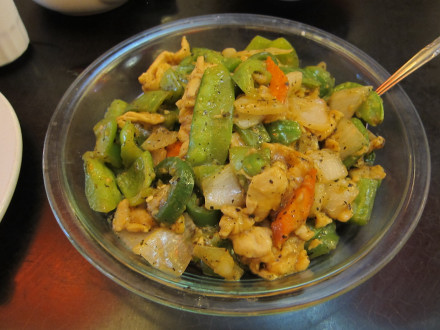 The Basil Chicken is probably the best of the Chef’s specials in terms of the vegetables and ingredients, and the hoisin sauce is good as well. At the time I ordered it I thought it was probably the best dish at the restaurant, although other dishes come very close (and I would say order the spicy eggplant if the sauce is the most important consideration). 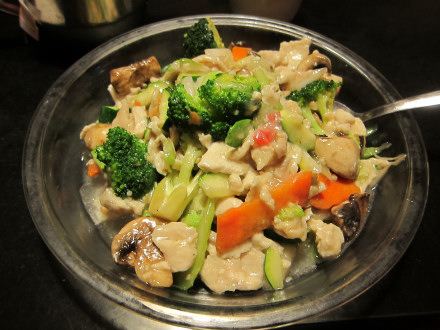 I found one of my favorite sauces here somewhat by accident by asking questions of the waitress. That sauce is the light garlic white wine sauce that comes on the Assorted Vegetable with Chicken dish. I had asked her about some other sauces and she suggested that this one was good because it had a barely noticeable garlic flavor unlike many of the traditional garlic sauces. I am now a big fan of it, and this was a very good dish. I should mention that in the stir fried dishes “with” something, you can have your choice of shrimp, combo, beef, chicken, or pork (although I generally like chicken best, I am sure these other choices are good as well). 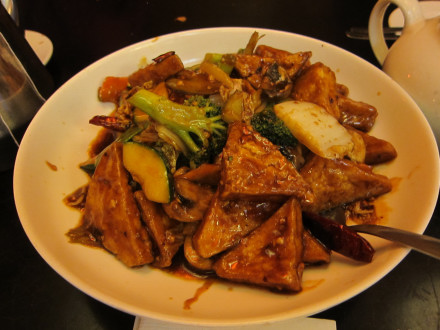 I have to say that I was not a fan of the Family Style Tofu for several reasons, and I attribute it to the fact that they were having problems in the kitchen. On my most recent visit in 2021 the restaurant seemed to be running on all cylinders, and that is why I am still giving an unqualified recommendation of the restaurant.

The main reason I had a problem with it was that it apparently had MSG, and a lot of it (again, this is not normal for the restaurant, and particularly when we have asked them to omit the MSG). 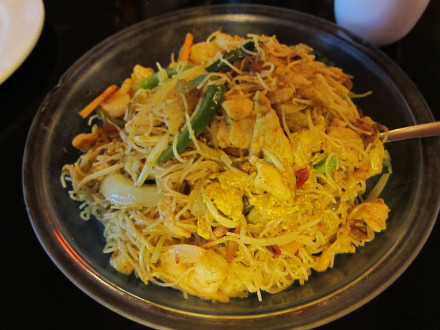 The Singapore Rice Noodles were spicy and had a good flavor.

Other Dishes
I am scratching my head a little bit because in the past my friends have ordered dishes with both Szechuan and Hunan sauce (I did not order them but I did have a taste of each one). The Szechuan dishes are no longer on the menu but I am not sure if they are now just going by a different name. 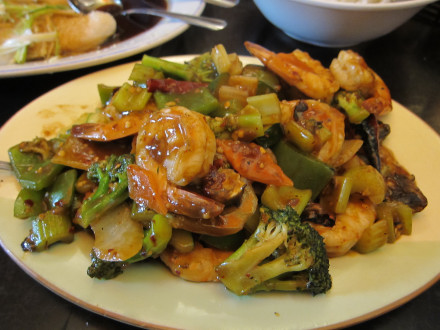 The Szechuan sauce was my favorite of the two, and I did not actually try the Hunan Prawns dish, but nonetheless I am showing the photo without a recommendation about whether others should order it or move on to something better. I could not find this dish on the current menu but it looks like something the restaurant could prepare if you request it.

A Wrap-Up
There are three restaurants in town serving the type of food they had at the old Sam’s on Yandell Drive (the one in the northeast continues the name “Sam’s”). I do not really prefer any of these restaurants (Sams, Sun Garden on the west side, or Red Lantern on the east side) over the others, but they all have certain dishes that are good and certain types of food that I like. They all serve Cantonese/ Hong Kong style food, but there are certain dishes that are spicier and imported from other parts of China. One thing I do like about Sam’s is that it has consistently had the best prices out of the three.

The “Chef’s Specials” section of the menu gives you the greatest choice of “authentic” Chinese food, and I really like everything I have tried from here. However, there are dishes from other sections of the menu that I would say have a very Chinese flavor, and which I like very much. One good example is the assorted vegetable with chicken which to me is outstanding because of the light garlic white wine sauce they use.

I suspect that there are still some more outstanding dishes here waiting to be discovered, and this is because I have great confidence in all the “Sam’s group” chefs.

Even after the great rise in prices I have seen in restaurants during 2020 and 2021, Sam’s is still in the $ price category for a number of items (although the Chef’s Specials fall barely into the $$ category and are likely to give you enough food so that you can take some home).