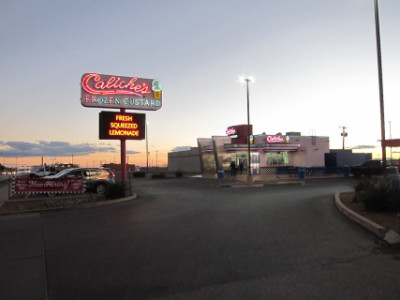 At the time when frozen yogurt places were very popular (and to some extent still are) I was largely wishing that frozen custard was as widely available as the yogurt. My fondness for custard was largely because of Caliche’s, a local mini-chain in Las Cruces, Alamogodo, and for a time in El Paso.

My review of Caliche’s is largely that I do not know a lot about frozen custard but Caliche’s has always seemed better to me than ones I have tried at other places. Caliche’s has a variety of toppings and things you can add to the custard, and they may or may not do a better job with this than other custard restaurants (I do not know because I usually get the plain custard). 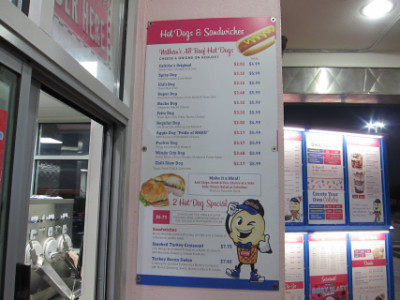 What I did not know until a friend told me, though, was that Caliche’s is also a destination restaurant for hot dogs. This gave me a double reason to stop at the location in Alamogordo. They do have sandwiches as well, and I believe the full menu is on their web site.

One interesting fact I did not know until recently is that the name Caliche is the Spanish term for “concrete,” a term for a very hard form of custard which is mostly used to blend in fruits, nuts, and hot fudge, but which I think is also good when eaten plain.

Caliche’s is take-out only, but has some benches outside where you can eat. This is not because of COVID, but they have always operated this way. The food they serve does not really require tables in order to eat it, but I found that a generous stack of napkins really helped. 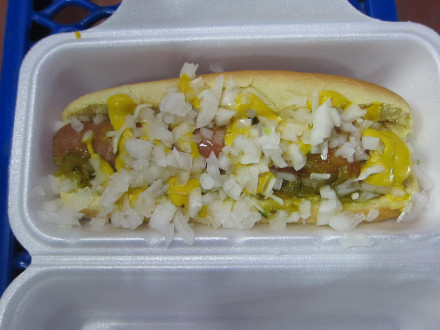 In Oklahoma City I was able to try the Chicago style hot dog, and I was surprised to learn that the hot dog at Caliche’s tasted exactly the same (that is, the hot dog itself). Caliche’s has its own style of buns and toppings, but my friends told me that it serves Nathan’s all-beef hot dogs (which I believe is also the standard for Chicago style dogs). The “original” hot dog was one that I thought would be good, but some others sound interesting as well. I think if I went back I would order the original one again because it as almost as good as the Chicago dog.

The hot dogs here are quite inexpensive, and they had some deals if you ordered two of them with a drink. I was not sure if people order two or more and make a meal off of it, but I thought one hot dog and the custard made a great between-meal snack. 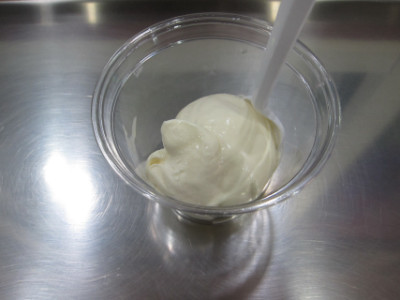 I got a scoop of custard because I did not want to fill up on it–I just wanted to taste it. I would say the frozen custard at Caliche’s is the best I have ever had. 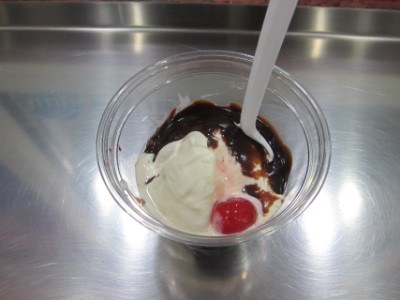 This photo is of a “Children’s sundae” which is not on the menu but is available for anyone who says they do not have the appetite at the moment for a regular sundae.

Other Comments
Caliche’s has two things that are very hard to find–frozen custard and all-beef hot dogs. I happen to think the custard here is better than ones I have had elsewhere.

Caliche’s has been operating for a number of years and is a local institution in Las Cruces and Alamogordo. They tried operating in El Paso and I do not know why it closed, but in the end it may be good that the chain has stayed small with what I think is the quality you get from a local restaurant.