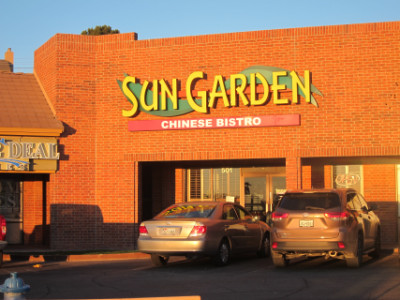 Update Jan. 2021: Sun Garden is offering takeout only. Orders must be called in, and when it is ready they call you back. You pick it up at the front door.

When Sam’s Chinese Restaurant opened on Yandell Drive it was a groundbreaking moment for El Paso, not only because it offered truly authentic Chinese food but also because the people of the city embraced it. Now chef Mike Wu, one of the original owners of Sam’s, has his own restaurant on the west side called Sun Garden Chinese Bistro (another one of the original owners has moved Sam’s Restaurant to Dyer Street and his wife operates Red Lantern in east El Paso). While each of the three current “Sam’s” restaurants has its own menu items and recipes, the original traditional Cantonese style of food can be found at all three of these restaurants.

I thoroughly enjoy all three of these restaurants, and of course the most obvious reason to choose one of them over the others is geographic. Whether you are in west, northeast, or east El Paso, authentic Cantonese and Hong Kong style food is available at any of them.

Sun Garden has a selection of authentic dishes which is very large for El Paso, and in this regard is very similar to Red Lantern. These are primarily listed in the “Specials by Mike Wu” or “Sun Garden Chinese Menu,” although sometimes when I have asked for authentic dishes I have found that they come from the regular menu. There is also a message board at the front door that lists the daily specials (and many times includes bao buns and other authentic items).

It is somewhat misleading to say any of the food here is not authentic, because all of it is prepared by Chinese people and has Chinese flavors. The food that I categorize as authentic, though, is more traditional, and is what people from China would expect at any restaurant that serves Cantonese style food. Much of it is served in large portions and is probably best served “family style” where it would be shared at a table. Because of this I have not tried a lot of the authentic dishes (another reason, though, is because they do not always have the ingredients available to make them).

What I classify as non-traditional or Americanized dishes are also Chinese at their heart but I find that the presentation is different, particularly in offering a large amount of meat with few vegetables (this is particularly true with the lunch specials). I think the sauces are very true to the Chinese style, although I have not tasted the restaurant’s most Americanized dishes such as sweet and sour or General Tso’s chicken.

If you are looking for either authentic dishes or ones that have a certain flavor the best way is to ask the staff. The menu is not always obvious, but ordering from the “Chinese Menu” does give you the assurance that it will be Hong Kong style. 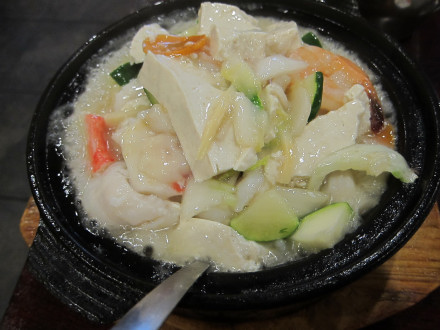 The Seafood Hot Pot with Tofu is an example of the “Specials by Mike Wu” which tend to be upscale with a generous portion that you will probably want to share. A variety of fish, seafood, meat, and vegetable dinners are available, and unlike the “Sun Garden Chinese Menu,” some of these items are spicy and represent other regions of China besides Guangdong and Hong Kong. The seafood hot pot was large enough that I took some home for another meal, which I enjoyed equally as the one in the restaurant. Although the seafood was not quite like what I had in New Orleans, it was very good. The sauce was excellent, and the few vegetables that it contained were very good. One thing that stood out was the tofu, which was a quality that is hard to find in El Paso (so I have been told by Chinese people). 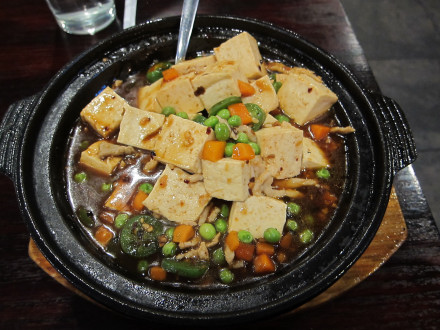 The Mapo Tofu from this section of the menu is an item I order regularly, and is definitely one of my favorites. This is the only item from this section marked as spicy on the menu, although I would say it is only mildly spicy and would not be classified as Sichuan food. I ask for it to be served in a hot pot although this is not the way it normally comes (there is no charge for changing the plate it is served in). The sauce is one of the best elements of the dish, being less sweet than at most restaurants but also more flavorful. The pork is very good quality, and I enjoy the large amount of vegetables and tofu that come with the dish. I think it also helps that the dish is a little bit spicy (or very spicy if you eat the jalapenos that are in the dish).

Once I tried to order the stir fried bitter melon with egg, but they did not have any bitter melon. I got a suitable substitute which I really liked, but when it comes to ordering traditional Chinese food in El Paso this is the approach that is frequently necessary (all restaurants in the city have trouble obtaining certain vegetables at certain times). 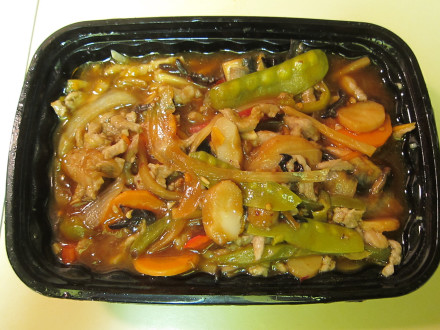 I have sampled several items from the regular menu, and friends have commented on others, but the one I particularly like is Szechuan Pork. The vegetables are particularly notable because they include many of my favorites (wood ear, bamboo shoots, snow peas, etc.), and the fact that there are more vegetables than meat in the dish. The meat is excellent as well. The sauce is a little sweet, but the flavors are balanced to give a traditional yu shiang (fish flavored) taste. 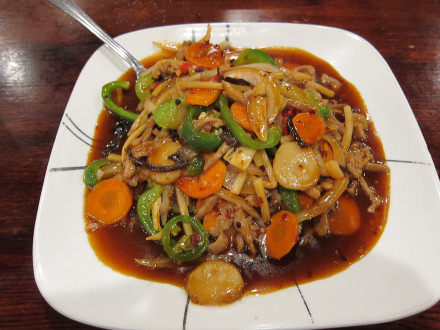 Szechuan pork served in the restaurant

This is another view of the dish served in the restaurant rather than the take-out version which I frequently order. The snow peas are not as visible here but other vegetables can be seen, including several jalapeno slices which are a large part of the dish’s spiciness.

This dish does present a dilemma, though, because the order is large but I do not think it as suitable for two meals as the mapo tofu is. It is not unreasonable to eat the entire portion in one meal but it is usually more than I want.

Lunch Specials
The lunch specials give you a smaller quantity of food at a good price, although the selection of items is fairly limited. There is always a daily special in addition to the regular menu items, though. 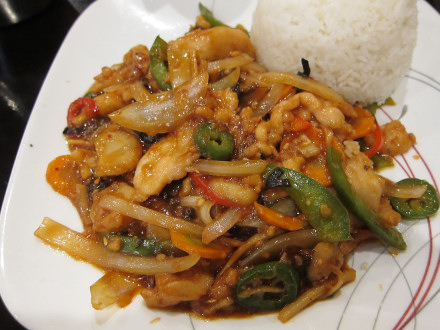 For instance, Szechuan Chicken is available as a lunch special, offering another take on what I think is one of the best sauces here. Unlike the Szechuan pork I have ordered, though, this dish is mostly meat with fewer vegetables (it is still good, though). 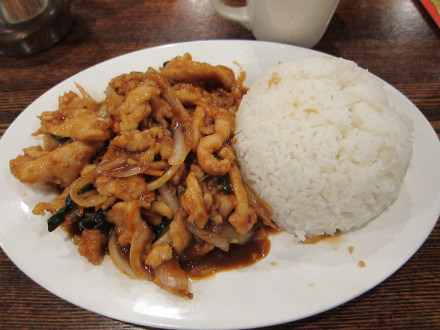 Basil Chicken was one of the daily specials served for lunch that I tried. Although I liked the flavor of it, though, there was very little in the dish besides meat and basil. For someone like me who usually likes a lot of vegetables in Chinese food, this was not the best choice. 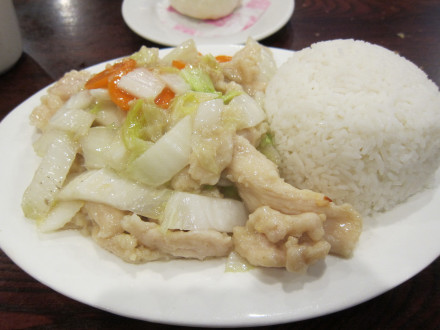 The Napa Cabbage with Chicken was a little bit better lunch choice in my opinion (and was also a daily special). The white sauce did not give it as interesting of a flavor as the basil chicken, but overall I liked it better because of the vegetables.

I did not really care much for the Egg Drop Soup, so to me the main reason to get the lunch specials is because the price is good and you get a portion of food that does not require you to take some home as leftovers (as I have frequently found to be the case with dinner items).

Some of the lunch items look as if they are quite authentic, such as the green bean pork or the roasted duck. Some definitely look Americanized such as General Tso’s chicken, but the important thing is that you get a choice (I do find it odd, though, that they have Szechuan chicken and beef but not pork). 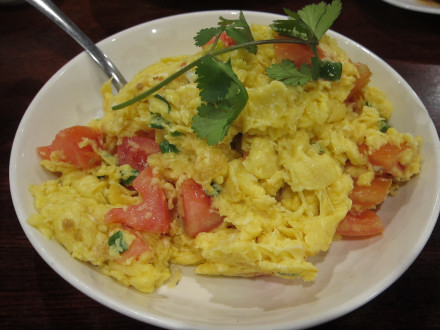 Sun Garden can prepare a few items that are not listed on the menu, such as Tomato and Egg. I got this when I tried to order bitter melon with egg but they did not have better melon. Tomatoes were substituted and it had the same sauce, so I was happy with the result.

I do not know what to tell others about what you can request as a special dish, but I believe there is very little that Mike does not know how to cook–it is mainly a matter of whether he has the ingredients. Also many traditional Chinese dishes have a long preparation time, and these would definitely need to be ordered in advance. 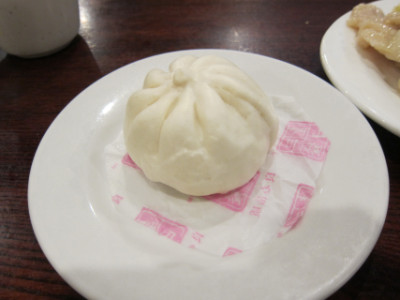 Sometimes specials are listed on the board at the front door, and a frequent one is the Barbecue Bun. This is not really sweet enough to be a dessert, but goes well with a meal (I would say especially with items such as the dinners that I sometimes try to stretch into two meals).

For my purposes I usually either get the mapo tofu from the Chinese menu which can make two dinners for me, or the Szechuan pork from the regular (dinner) menu which is good for about two lunches (or one rather dinner when I am particularly hungry). The Luncheon Specials are meant to be smaller plates that one person can easily eat, but I have found some of the chicken dishes to have quite a bit of food. I do think there are some good smaller dishes from the dinner menu or the Chinese menu, and I will report them when I find them.

I do not think I have even begun to try a good sample of the different dishes here, and items from the Chinese menu in particular are meant to be served family style meaning that if I try it I should be prepared to take some home.

Most of the people who come with me to Sun Garden do not share my desire to try the “authentic” food, leaving me to try it for myself. It seems, though, that even people with the most limited knowledge of Chinese food like the food here, so it is a good place to come with your friends or picky family members. I am quite impressed that chef Mike has found a way to package a more Chinese tasting style of food to the mass market in El Paso, and the number of customers seems to increase every time I go to the restaurant.

Sun Garden uses MSG and so far I have not had any issues by asking them to omit it. This may be difficult on some of the slow cooked items such as roast duck, but at least with what I have ordered there have not been any problems.