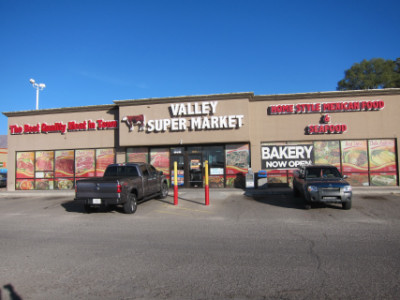 Valley Super Market is a local meat market and Mexican grocery store with several locations in El Paso. Not being familiar with many of the items normally sold in Mexican markets, it is hard for me to make a comparison with other stores. I would classify it as a small store, though, which mainly carries items not sold in the regular super markets (such as Wal-Mart, etc.) that you would want to use for Mexican style cooking.

The Resler location has a meat market, bakery, a section for other groceries, and a restaurant that is served deli style (you order at the counter and select the items you want from the display case). The restaurant closes an hour earlier than the store, though (the store closes at 8:00 p.m.–7:00 on Sunday).

I indicated below the number of times that I have eaten at the restaurant, but I am a somewhat regular customer for the baked goods and other items. Since I do not give ratings for grocery stores or bakeries, the one here only applies to the restaurant. 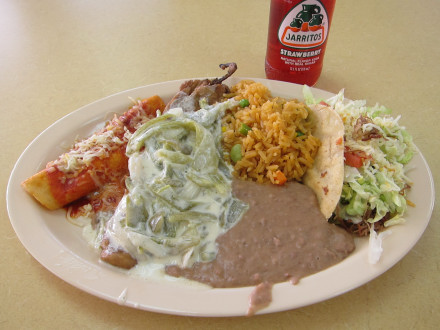 Most items are served individually or by the pound, but they do have some plates available with rice and beans such as the Plato Mexicano shown in the photo. Although this was not the absolute best Mexican plate I have had in El Paso, it is a good deal for the money, and is far above the Mexican food I can find in other areas such as Oklahoma City. The Red Enchilada was particularly noteworthy as being a good representative of El Paso style Mexican food. It was not too spicy but had a good flavor.

The Chile Relleno did not stand out much from others in the city except for the fact that the rajas con queso on top were so flavorful that they turned it into a somewhat exceptional relleno. One notable feature about the rellenos is that they remove the seeds.

The Shredded Beef Taco was good but was a little lacking in flavor compared to some others in the city.

The Rice with lima beans was very good, especially compared to most other restaurants.

The Beans were not special for El Paso but were excellent compared to most other places.

You do not get chips with a dinner here, but they provide salsas to go with the food.

There is no tea but Mexican sodas are available.

Items served by the Pound 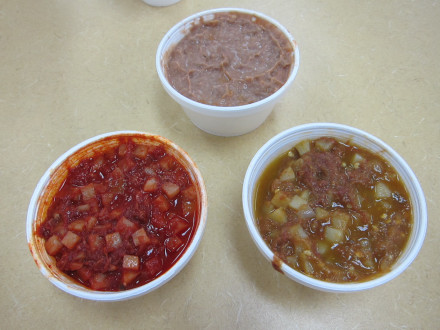 For any item that is not part of a plate, you will need to specify how much you want. This is also a way to get a meal if you go after the restaurant closes at 7:00 but the store is still open (until 8:00 pm). Tables are available any time during store hours.

Shown in the photo are a half pound each of chile colorado and chile verde, along with some beans (which you can also order by the pound or portion thereof). The Chile Verde was so spicy that I thought this detracted from its flavor (I admit that I am not a diehard chilehead). I found the Chile Colorado to be very flavorful, though, and is one of the best in El Paso for sure. Both had a large potato content which I think enhanced the flavor of each one. 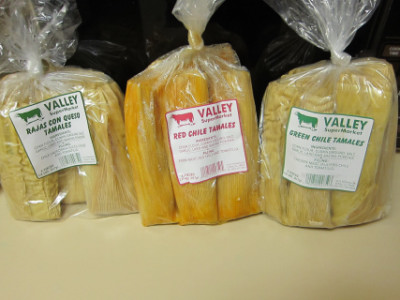 One notable grocery item is the Tamales, which come in three flavors–red, green, and queso con rajas. In order to try them I had to buy three packages with six tamales in each, and some ended up in the freezer (I don’t think they are as good after this). Even when fresh, though, I did not think they were as good as some in Canutillo (either at Lupita’s or the Little Diner).

The Pan Dulce from Valley Super Market’s bakery is good, although I agree with some comments I have seen that it is probably better at Los Jarrones on Redd Road. I think Valley has a better selection of items than Los Jarrones, though.

I also like the regular bread sold here such as the Bolillos.

Other Notes
In addition to the food being inexpensive, it is also self serve so you do not necessarily need to leave a tip (although you can). The food is actually very good, but the main thing I do not like is that they do not have iced tea.

I also find the food here to be “greasy” (for lack of a better term) but to avoid this I would recommend items such as the chile colorado that are like a stew.

The food seems to be Chihuahua style, although I think the enchiladas are typical of El Paso (they have more chile sauce than the typical Ciudad Juarez enchiladas). I was pleasantly surprised by the chile con rajas served on top of the chile relleno, and I think this is probably a Mexican tradition rather than one normally found north of the border.

Although I like the Mexican plate and it is a good way to get a sample of the food, many of my favorite items are ones I have ordered a la carte (the chile colorado is the best item I have found so far).

For the pan dulce I think the Empanadas are some of the best in the city, but for everything else I generally prefer other bakeries.

My cost category of $ applies if you order items a la carte and make a meal out of it, but it is $$ if you get the Mexican plate.