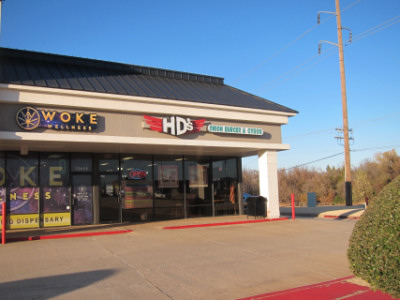 HD’s Onion Burger has been a popular neighborhood hangout since 1999, and has kept its customers by supplying many staples of Oklahoma cuisine including hamburgers, hotdogs, sandwiches, and chili. It is also known for its gyros, an item that was somewhat on the cutting edge when the restaurant opened but which now is widely available around Oklahoma City.

Fred and his family operate HD’s like a true family business where they not only take care of everything having to do with the restaurant, but also make customers feel at home in one of the approximately ten tables (or in greeting the seemingly greater number of people coming for takeout orders).

I think the gyros are a result of Fred’s Middle Eastern heritage, and he says they are prepared the way they are done in his native country of Iran (and I do think they have a different flavor than the ones served in the city’s Greek or Lebanese restaurants). Hamburgers and other meats are cooked on a giant grill but despite this I have never found them to have a greasy flavor. Much of the food is just as people would find anywhere in Oklahoma, but possibly with a little bit better quality than most. 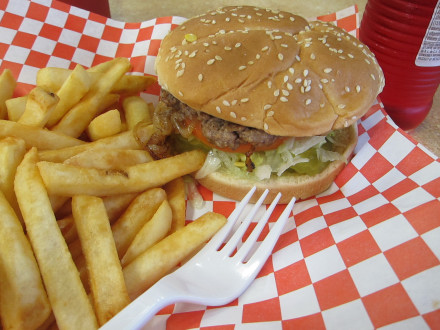 I think there is some confusion about the term “onion burger” in Oklahoma. As far as I can tell El Reno is the origin of the onion burger–ones that were cooked during the Depression with grilled onions cooked into the patties to make the meat go farther (and also to give them a great taste). HD’s and other restaurants which serve the OKC version of onion burger grill the onions the same way, but put them on top of the patty instead of in the meat. I do not think these are the best versions of onion burgers, however it does allow me to compare the Hamburgers at HD’s with others in the city, and I think HD’s has a good one. Two of the reasons for this are the grilled onions and the fact that the burger does not taste greasy. I also liked the fresh tasting lettuce and pickles that were on top. 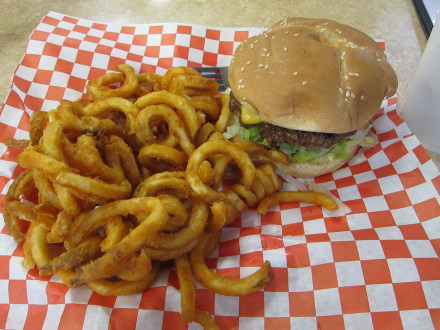 To me the Cheeseburger was a step down from the burger because it was harder to discern the things that gave the burger such a good flavor (such as the onions). 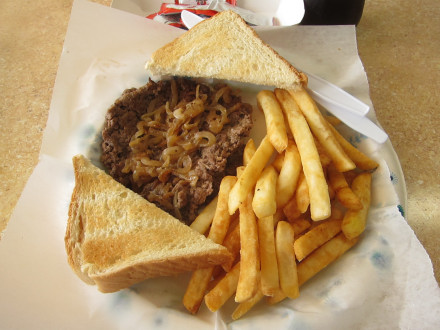 I like the Hamburger Steak better than the hamburger because it has the same grilled onions, but Texas toast instead of a hamburger bun. It was more evident to me here that I was eating good quality beef, and overall I thought this was the best option for trying the hamburger meat. 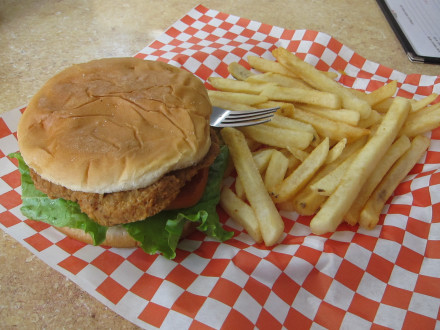 I tried the Steak Sandwich when it was the Friday special, but it was disappointing to me compared with the hamburger options. Fred buys them already breaded, and says that it is a pound steak (which has been tenderized). I rated it as a four for flavor although certainly the quality is very good and probably at the five star level. 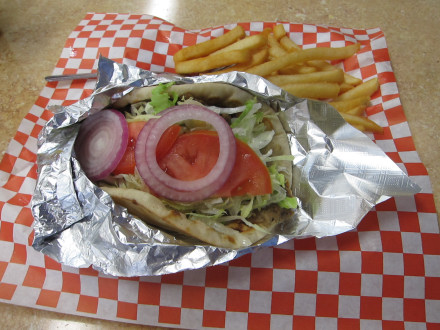 The owner Fred says the Gyro here is the style they serve in Iran, thus the flavor is a little different from others in the city. His sister and  her husband own Travel By Taste which also serves gyros, so I suspect there is some sort of collaboration here in the way they are prepared. In any case, until recently I thought the gyro was the main reason to come to HD’s (recently I have added the hamburger steak to the list of best dishes). 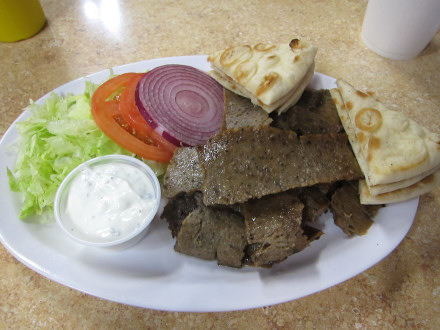 The Gyro Dinner serves the same ingredients in a different form, but I think if you combine the items in a certain way you would still have the same things that are on the sandwich. One thing I noticed, though, is that it has more meat than on the sandwich. Like the sandwich, one of the best features is the very flavorful tzatziki sauce. 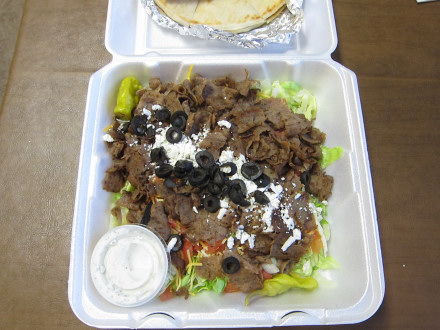 To me the Gyro Salad is the most enjoyable form of having the gyros. It has the same meat and sauce, but the black olives and feta cheese give it more of the type of flavor I like. 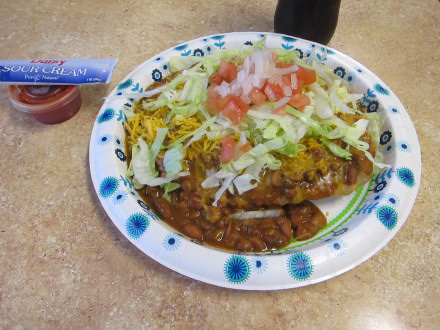 The Indian Taco was a combination of being better than I expected along with not being as good as I expected. The “better” part was the fry bread which was a little bit like the sopapillas they serve in New Mexico (although the New Mexico fry bread is not as sweet). I had read about a restaurant in Shawnee that serves Indian tacos where one of the chefs is from the Navajo nation in New Mexico, and I can certainly see this type of connection for the fry bread served in Oklahoma. The chili part, though, was very tame even by Oklahoma standards (the best chili I have had was at Johnnie’s in El Reno and this is the standard I use to judge the others). I would try HD’s Indian taco again but they have so many other items I like it is hard to know when this would be. 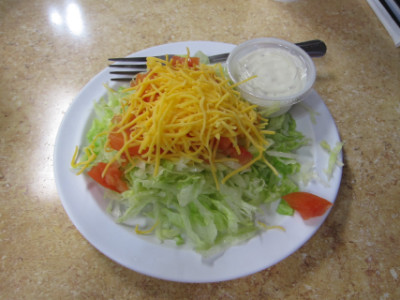 With iceberg lettuce and cheese, this is not a Salad I would go out of my way to order. However, it is fresh and the gyro salad (using the same lettuce) is very good.

Side Dishes
During the pandemic Fred changed his French Fries to a version I liked much better (they were crispier and less greasy). However they were frozen instead of the fresh ones he had been preparing. Now I think he has changed them again and I do not know what they are like at present. I do know, though, that he makes an effort to serves customers the best fries he can prepare.

I did like the regular fries better than the Curly Fries, though, with all of the french fry versions. The curly fries had a seasoning that I did not like very much. 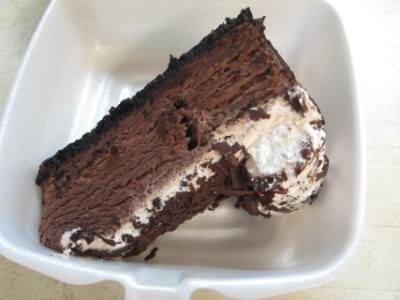 The refrigerated pie display at HD’s has given me more choices than I could sample, but the Chocolate Mousse Cake is so good it is really hard to pull myself away from it long enough to try anything else. I did not ask Fred who makes the cakes but they definitely taste home made. 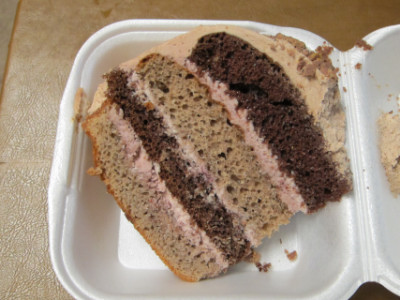 Another one I tried was the Raspberry Cake which had the potential of being even better than the chocolate, although there was not enough raspberry here for my taste. 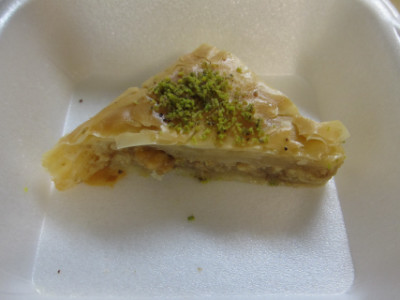 The Baklava is a good choice to have with the gyros and is a dessert I frequently order at Middle Eastern restaurants because it is made with honey instead of sugar.

Other Notes
My personal favorites here are the gyro salad and hamburger steak, depending on what I am in the mood to eat. Another item I like to order quite a bit, though, is the onion burger which makes a solid meal of comfort food.

For takeout my favorites are the cake and the Mexican drinks, especially the Mexican Coke. Fred could not get the Cokes during the pandemic but now they are back. San Marcos Restaurant about a block away continued to carry the Cokes through the pandemic but they are quite pricey. Homeland Grocery Store across the street to the east has Mexican Cokes but they are in smaller bottles and I am not sure if they have the same flavor. I think HD’s has the best deal on Cokes (and other Mexican pops) in the area.

For eating in, though, I get tea with the meals. They have a fountain where you can get refills but usually the staff will do it for you. The Mexican Cokes are in such large bottles that I really do not want to drink this much in one sitting, especially knowing how much sugar it has.

On one of my last visits (in Aug. 2020) Fred was planning to get another cooker. He said with this he could prepare chelo kebobs (an Iranian dish) and possibly other items. In any case, I am expecting HD’s to be even better in the future than what I have experienced so far.