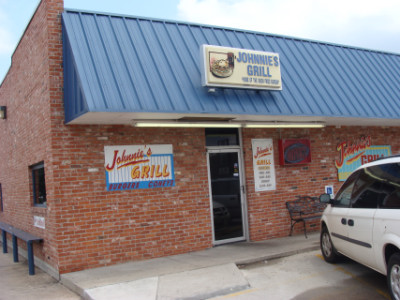 Having grown up with hamburgers as one of the staples of my diet, there were two ways of preparing them that made for an extra special treat: onion fried and charcoal broiled with hickory sauce. While there are still several places in Oklahoma that prepare decent charcoal broiled hamburgers, finding onion fried burgers that taste like the ones I remember as a kid seems to be increasingly difficult. One of the first places I would recommend trying, though, is Johnnie’s Grill in El Reno. In business since the 1940’s, it still prepares food the old fashioned way– with not much consciousness of fat or cholesterol, but very cognizant of maintaining the long-established standard for flavor and enjoyment of a burger.

El Reno is close enough to Oklahoma City so that many people make the commute every workday, but far enough away that a dedicated group of fans make the commute the other direction to eat some of the famous onion burgers and Coneys in El Reno as often as they can make the trip (but it is probably never often enough). There are three El Reno restaurants that are well known for the local specialty (onion burgers and Coneys), and probably others that are less famous but still good. I think the burger at Johnnie’s Grill is about the best I have found anywhere, and the Coney is not far behind. The onion burger is definitely a local specialty, since I have not found any in Oklahoma City that are quite as good.

Johnnie’s does have other items, both on the breakfast menu (6:00 a.m. to 10:30 a.m. Mon.-Sat.) and the regular menu (lunch & dinner daily).  The burger and Coney, though, are what cause most people to make the pilgrimage to Johnnie’s. 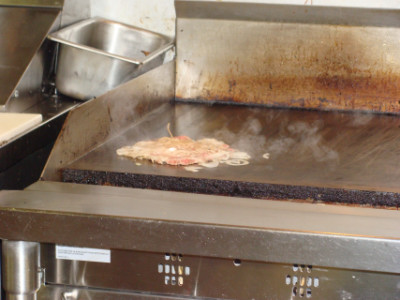 Onion burger cooking on the grill

While there are several items on the menu, the Onion Fried Hamburger is what has made Johnnie’s famous throughout central Oklahoma (and in other parts of the country as well). Each burger is individually prepared as you order it, with the onions cooked separately on the grill so they become caramelized and then added into the patty as it is cooking in order to ensure a proper blend of beef and onion flavors. The onions are added early into the meat’s cooking process and the patty is mashed flat to ensure proper cooking of all ingredients. The onions end up being cooked much longer than is found with the typical “burger with onions.” In fact, they are cooked so long that for me it eliminates the negative side effects of eating onions such as a strong taste and possible gastric upset. 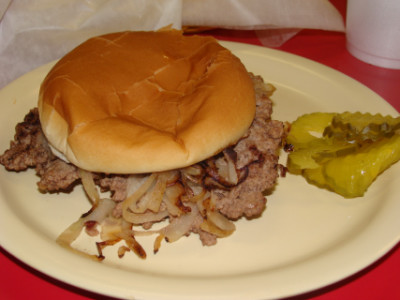 The onion burger at Johnnie’s

The end result is one of the best burgers around, and a meal that in terms of flavor rivals many “fine dining” restaurants. The meat is high quality and never frozen, and the mustard and pickle toppings go perfectly with this creation. Only the white bread bun is a throwback to a half century ago that I think perhaps could be updated. 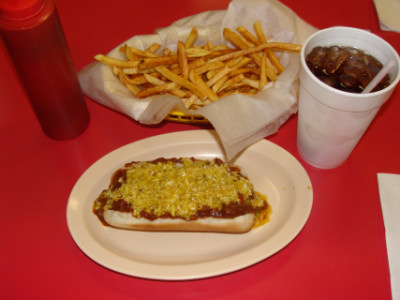 The Coney at Johnnie’s

Johnnie’s other highly popular item is the Coney, a high quality hot dog that comes with different toppings. The most popular, though (and Johnnie’s specialty) is a Coney topped with chili and a special cole slaw that seems to be served only in El Reno (with other popular restaurants serving slightly different versions). The chili was really one of the smoothest and most flavorful I have ever eaten (by smooth I mean mainly that it was not greasy and was somewhat liquid so that it could be poured over the hot dog). Many people familiar with New Mexican cuisine (and I among them) proclaim their chile to be hotter, more flavorful, and more satisfying than the Tex-Mex style chili (which is always brown and usually made either with meat or beans). Johnnie’s chili, though, was different, with a flavor that I think made it equal in quality to much of the New Mexico chile (although certainly not as spicy).

The slaw made an interesting flavor contrast, and although I did not think it in itself was as exceptional as the chili, the combination of the two allowed me to experience the flavor that makes the El Reno Coneys famous. This was a somewhat toned down slaw with not as much sharpness as is sometimes found in normal cole slaw.

Side Dishes
The French Fries were greasy, but not overly so. They are certainly better quality than is found at most restaurants these days. 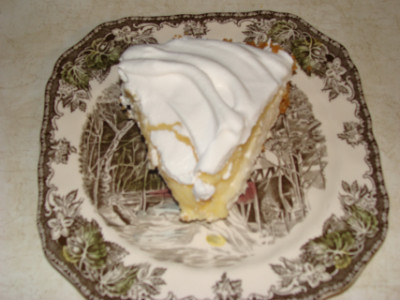 Sitting at the counter is a great way to chat with people and watch the food being cooked, but tables are available for families and those who prefer more space. Being at the counter allowed me to spy out several types of pie that were available (Johnnie’s has a person who specializes in baking the pies). I would not call the pies gourmet, but they were good (yes, I tried more than one kind).

Directions
Johnnie’s is in downtown El Reno on historic Route 66.  It is also located on U.S. 81, so going north from the U.S. 81 exit on Interstate 40 is an easy way to find the restaurant.

A drive-through window is also available for take-home or if you need to get back to Interstate 40 for a cross-country trip. Going to Johnnie’s requires about a four mile detour (round trip) from IH-40.

Recommendations and Tips
Most people do not have any trouble figuring out what to order: an onion fried burger would be a good bet here. The Coney dogs are also a popular choice, and with the chili and slaw are as hard to match elsewhere as the burgers. After all, only Wimpy of the Popeye comics can subsist solely on a diet of hamburgers.

A hot link or Polish sausage can also be made “Coney” style (with chili and slaw).

A breakfast menu is also available Monday through Saturday from 6 a.m. to 10:30 a.m.  They serve just about everything that can be cooked on a grill– pancakes, omelettes, French toast, biscuits and gravy, etc.  It is interesting, though, that they also offer a couple of items made with their famous chili (the same chili used on the Coneys)– a burrito or a bowl of chili.  I do think the chili here is probably the best I have ever had, so I can see why some would want it for breakfast.

Johnnie’s still has the original counter with bar stools in front of the grill, but also has a large dining room with tables (for more space and to accommodate larger parties of diners).

It is stated on their menu that they are open from 6am to 9pm Monday-Saturday and 11am to 8pm Sunday.