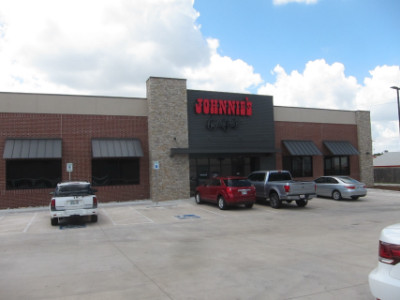 Johnnie’s has been my favorite place for hamburgers in Oklahoma City since the demise of the Split-T and The Patio, and follows these restaurants’ formula of serving charcoal broiled hamburgers with hickory sauce. “Johnnie’s sauce” is based on the one at Split- T, with a tangy flavor very similar to some of the sauces served at various barbecue restaurants . It is a difficult task for any restaurant to live up to someone’s childhood memories, and I still think the Split-T and Patio had the best hamburgers ever, but Johnnie’s has been doing a good job of continuing the tradition of what I consider to be “Oklahoma City style hamburgers.” 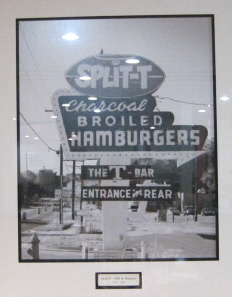 Historical photos at Johnnie’s pay homage to some of the city’s early restaurants, including this one of the Split-T

I understand that the hamburgers at Johnnie’s are cooked partially over charcoal (giving them a distinctive flavor), and partially on a gas grill (making sure they are thoroughly cooked). I think it has an excellent result, and is even better with Johnnie’s sauce. I rate this as one of the best burgers in Oklahoma, based on a subjective scale of the burger being important but the sauce being crucial (and I think no one else has a better sauce).

To me the veggie burger is equal in enjoyment to the hamburger, although with the provision that I get it with Johnnie’s sauce. To be honest, most veggie burgers are a real letdown, but the one here is a genuinely good patty with an even better sauce.

This location was closed for a couple of years (I think about a year longer than they had scheduled) and has since reopened with a new building. The dining room is smaller than before, but I was impressed with the quality of the food. I believe Johnnie’s has embarked on a program which is bringing all of their locations up to the highest standards that I think have not always been evident during recent years. My recent experiences at various locations, though, have consistently been among the best I have ever had at this restaurant chain. 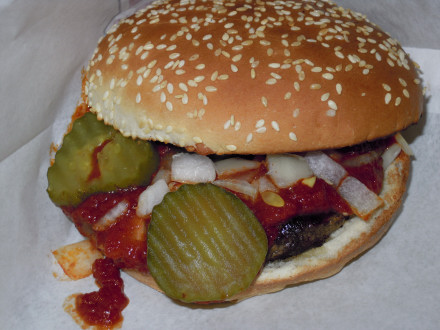 One of the main attractions here is the No. 5 Hamburger, a charcoal broiled burger with Johnnie’s sauce, pickles, and onions. The sauce is cooked each day for about five hours, and is made with a secret blend of ingredients. It is much like a barbecue sauce, but this one is better than any similar sauce I have tried in the barbecue restaurants. The theta burger (which includes mayo and Johnnie’s sauce) is also quite popular, but is not a favorite of mine.

The No.1 Hamburger comes with Johnnie’s sauce only, and over time this has become my preferred order because I think this sauce really needs nothing else to go with it.

The meat patties are made with chuck, and are higher quality than the average hamburger. I have found meat patties at other restaurants which arguably have a better flavor (such as at Interurban which also makes their burgers with chuck). It is hard to say who has the best burger overall, but I would just say I like the charcoal broiled flavor of Johnnie’s burgers and their sauce is really the best I have found anywhere.

The buns with sesame seeds comprise the third feature that makes this hamburger so enjoyable. Johnnie’s has burgers available without the bun for those who want it this way, but for me the best choices are to get a veggie burger or hamburger on a bun.

At Johnnie’s a Veggie Burger is a good alternative to the hamburger, although I would say this would not be the case at most restaurants. Here the meatless burger seems to have a better flavor than others, even though several others also serve a “Southwest” style patty with black beans and other ingredients. The veggie burger does not come with Johnnie’s sauce as a default, but this is the way I order it.

Frankfurters
Johnnie’s offers some other choices if you are not in the mood for a burger. One popular item is the Frankfurter with chili and cheese, similar to the coney hot dogs served at many of the local hamburger restaurants. The frankfurter seemed to be better quality than most, with more meat and less “filler” than many hot dogs, as well as a good flavor. The chili, though, was disappointing compared to the “other” Johnnie’s in El Reno (this is a separate restaurant, not related to Johnnie’s Charcoal Broiler). The chili is Texas style–spicy and brown colored (Texas chili can be very good, but I just don’t care much for the one here). 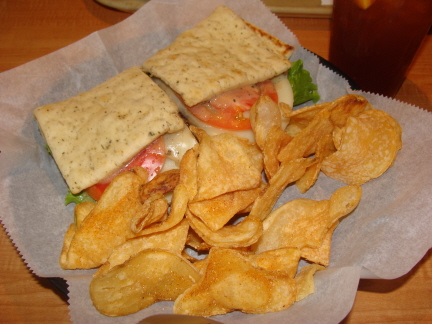 In recent years Johnnie’s has expanded its menu to include items other than its signature hamburgers. Although I was skeptical about ordering any of them, the Basil Chicken Flat Bread Sandwich was surprisingly good. Made with grilled chicken breast meat, provolone cheese, balsamic basil vinaigrette dressing, and herbed flat bread, no one of these components was really a weak link in the sandwich. I cannot say that the balsamic vinaigrette dressing was comparable in flavor to the Johnnie’s sauce used on hamburgers, but I still thought the dressing used on the chicken sandwich was good quality and had a good flavor. The home made chips that came with the sandwich were quite good, and overall the sandwich was a positive addition to the menu. Note: I do not see this on the current menu but the menu changes from time to time and it may come back. 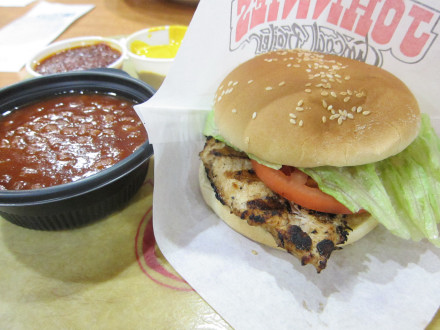 The Grilled Chicken Breast Sandwich had less flavor than the previous flat bread sandwich but it is a good alternative if you do not want a burger. I frankly prefer the chicken at several barbecue restaurants, though, such as Swadley’s or Billy Sims. 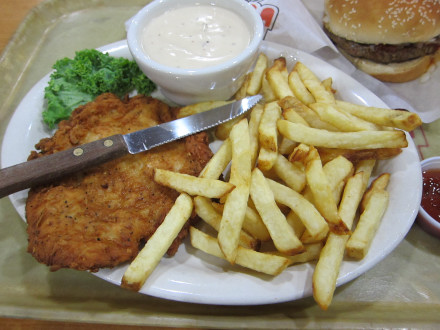 The Chicken Fried Chicken did not really stand out to me except for the fact that the gravy was very good, and of course it comes with Johnnie’s french fries (you can also get a baked potato or onion rings instead).

Side Dishes
The French Fries are almost addictive with just the right amount of grease. The large order is probably appropriate only for a family with hungry kids (if you can eat an order by yourself, I would seriously worry about you!).

Baked Beans are a healthier side dish, and just about as good as the fries. Because of tradition, though, I usually order the fries. 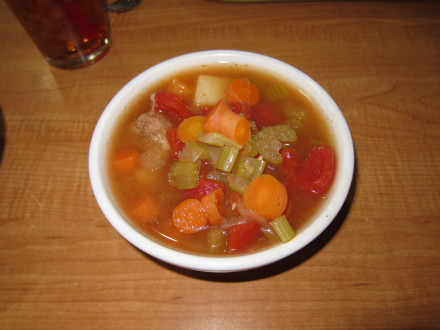 The Vegetable Soup is a very worthwhile side dish, not only to make a healthy meal but also for the flavor. I cannot verify this information, but the soup seemed to be made from scratch using fresh ingredients, and I was quite impressed. 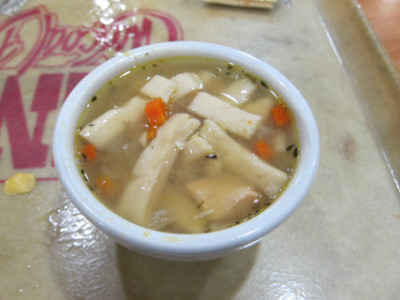 The Chicken Noodle Soup was also quite good except that I thought it was too salty. 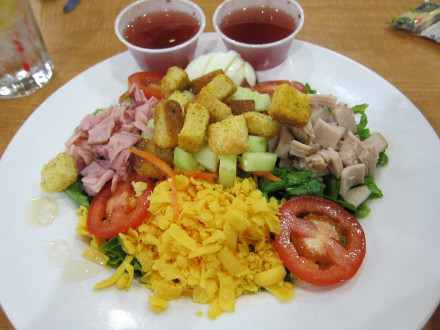 Salads are also available such as a chef salad, Mandarin cranberry, and strawberry spinach (which the menu says is seasonal).

Drinks
The Iced Tea is very good, partly because the crystal clear ice is much better than the ice I can make at home from tap water. I rate the tea itself as my favorite in Oklahoma City, possibly tied with Hideaway Pizza and one or two other places.

When I really need a Milk Shake (such as after a visit to the dentist or other traumatic experiences) I head to Johnnie’s. As strange as it may sound, it even goes well with a hamburger (I tried it myself just to make sure I could make this statement). I think the one here is better than at Braum’s, but others are welcome to make their own taste test. 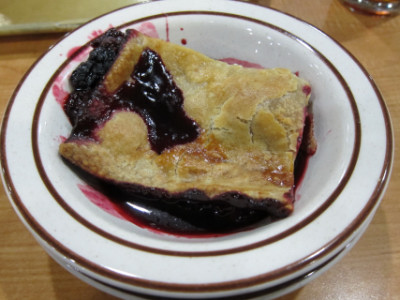 Blackberry Cobbler was less sweet than those I usually find at restaurants (and I think this is a good thing). Like other items here, the cobbler tasted fresh and made from scratch. The only negative was that the crust was not my favorite. 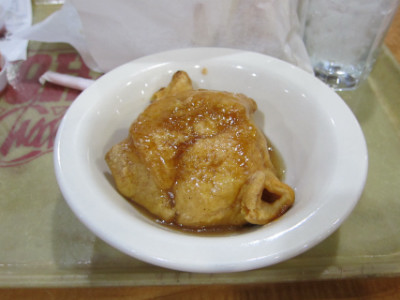 The Apple Dumpling was good, but somehow I never had the desire to try it a second time (to me, eating something with Johnnie’s sauce is almost a dessert to me). 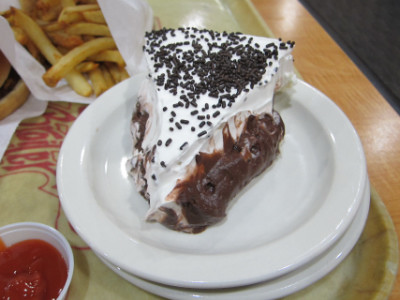 Chocolate Pie always looks like the best dessert at the old restaurant where we were tempted by a display case while waiting in line to order the burgers. I have found it to be disappointing, though–it seems to be mostly cream and there is not much chocolate flavor to it.

Summing It Up
Johnnie’s sauce is something that allows me to relive some of my pleasant experiences from childhood, and because of this I am a very loyal customer here. The other factors in the burger are very solid as well (i.e. the meat, the bun, etc.). A critical one, though, is their method of charcoal broiling that possibly makes this the best burger in OKC (at least when I come here I am thoroughly satisfied with it).

Disclaimer: Since the new building opened I have only had the burger, fries, and tea. I do not know if every item I have reviewed is still on the menu, or how they compare in flavor to the earlier versions. I do believe, though, that the “new” Johnnie’s I have seen since their reopening is not an attempt to modernize or change any of the food, but simply to make sure that it always has a good quality control. 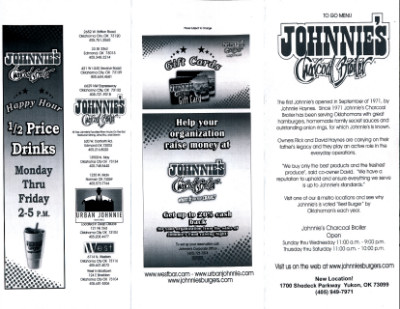 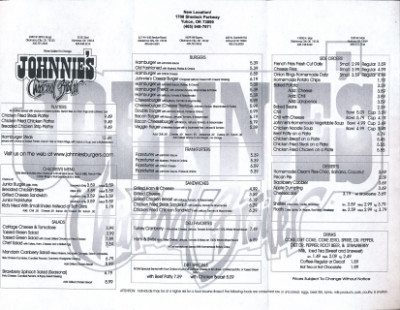