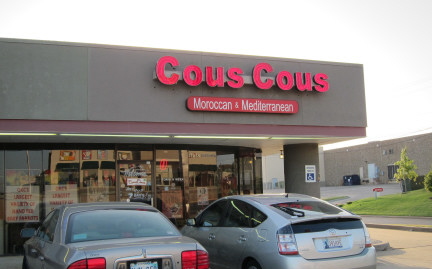 Since I have been writing restaurant reviews there have been two trains of thought going on–one is to share the places I enjoy and let others know about them, and the other is expand my knowledge and find new places based on research I do and reviews that others feel passionate enough about to share.

In the case of Middle Eastern and Mediterranean restaurants, my experience in recent years has expanded from having some general knowledge about Italian, Greek, Lebanese, and a few other types of cuisine to an exploration of many styles of cooking and the regions from which they originate. I found Cous Cous Cafe based on reviews as comments that other had made about it (when I first went it did not even have a sign and I never would have found it otherwise). This was my first experience with Moroccan food, and I knew right away it was something I needed to keep in my rotation.

At Cous Cous Cafe it was obvious from walking in that one of their specialties is the tagine, a type of casserole made with rice or couscous, with meat and/or vegetables. The seasoning is also a key factor but another key is that the vegetables taste like they are fresh from the garden, and the meat is exceptionally flavorful. They sometimes serve specials such as cobia, a type of fish found in the warm waters near Morocco and which I think can be very representative of traditional Moroccan food.

Couscous, made with rolled semolina wheat, is another Moroccan dish featured here, and they also offer other typical dishes such as skewers. 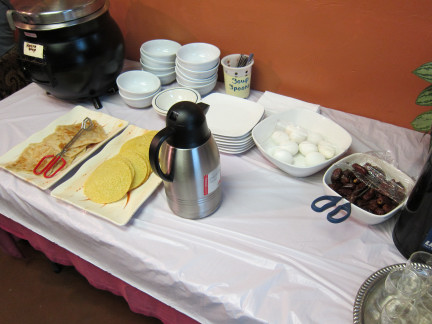 During the religious holiday of Ramadan there is a buffet with traditional foods meant to break the fast that adherents have practiced all day until sundown. Coming here I have not only learned about Moroccan food, but I have had more of an education that I typically get from ethnic restaurants. 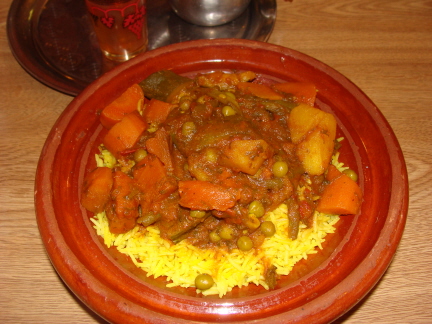 Tagines are clay pots that have a bed of either rice or couscous, and are topped with various combinations of meat and vegetables. I have ordered the Vegetable Tagine more than once simply because it is hard to believe that vegetables can taste this good (but each time I try it this has been confirmed). After a while I noticed that the rice seems to have a curry flavor, although not spicy like Indian curry. In any case, this may be my favorite dish at Cous Cous Cafe. 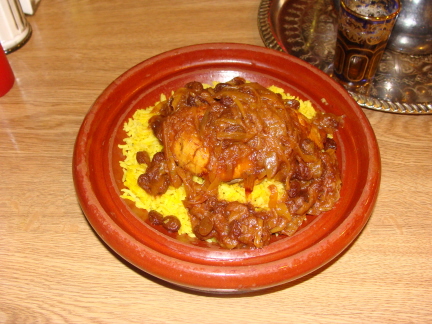 The Chicken Tagine I ordered had a flavorful dark meat on the bone with a sweet and complex sauce that made it very enjoyable. I do think the meat dishes are somewhat more filling than the vegetable tagine, but with the amount of rice that is served both are filling enough. 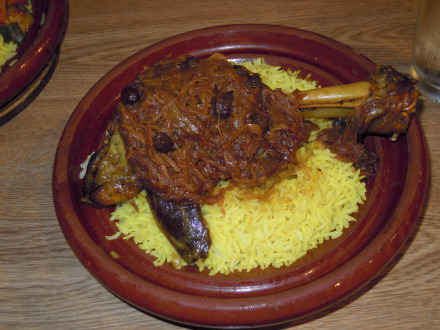 The Lamb Tagine is a lamb shank with a sweet sauce of onions and raisins (or you can get the same vegetables that come with the other tagines). For me, though, the raisins made this a very memorable and special meal (not to mention that I seldom get to eat lamb and particularly one that is this good). 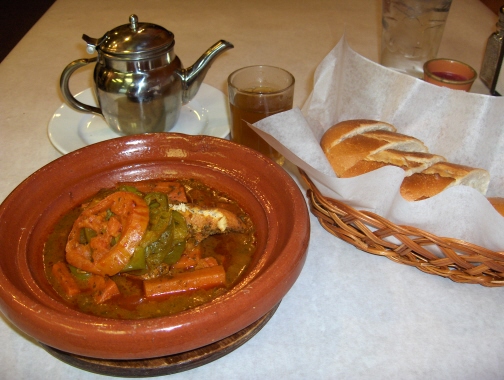 Tajine plate of cobia fish fillet (served as a special)

The Cobia Tagine was one that they had as a special, and it is not regularly on the menu. One thing that was different about it was that it was a fillet and did not have any bones. The fish was mild and non-fish tasting. The sauce was made with prune, apricot, and honey (but was not as sweet as this may sound). Any time this is offered it is something I would recommend–this was one of the best Mediterranean style dishes I have had anywhere.

Couscous Specials
The “Couscous Specials” section of the menu seems to include all the items not listed elsewhere on the menu, but it also includes their couscous dishes (similar to the tagine but with couscous as the base).

Chicken Couscous included the same type of meat (bone-in) that I had with the tagine except this one was white meat. The vegetables tasted fresh out of the garden and were so impressive that I thought perhaps this was my favorite dish at the restaurant (although because they serve vegetables in season where possible it was probably that I ordered the dish at the right time of the year). It comes on a bed of couscous, but the tagines have this option as well. I am not even sure what the difference is between this and the tagine (except that tagines are the only ones with a rice option). I do know, though, that I like both of them. 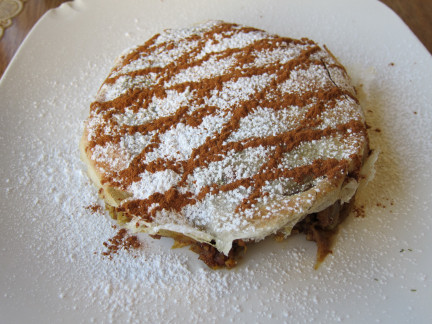 The Chicken Bastilla is served in phillo dough with enough cinnamon and sugar on top to almost make it a dessert (it was almost like a chicken pot pie made sweet). It is well balanced, though, and the sweet element does not overpower the rest of it. 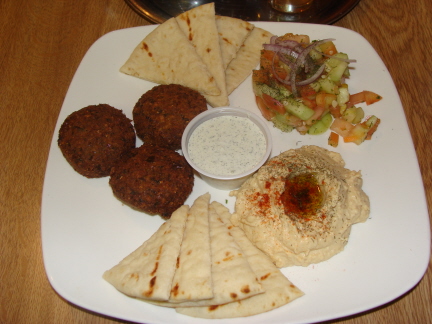 The Vegetarian Combo was on the old menu, but the items pictured as presently available as side dishes (and might be available as a lunch special which I believe it was when I ordered it). The falafel and hummus are typically known as Lebanese dishes, and I assume they would also be part of many typical Moroccan meals as well. Both of these (as well as the salad) are among the best I have tried in OKC. 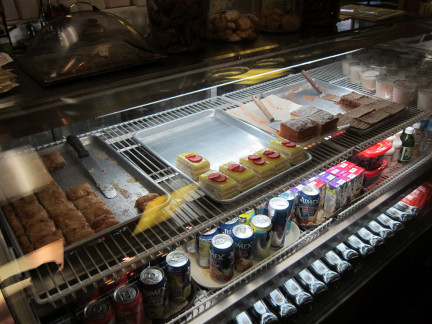 Food counter with desserts and other treats

The desserts present a real opportunity to explore Moroccan food because in addition to a large menu selection, they seem to always have special items available. 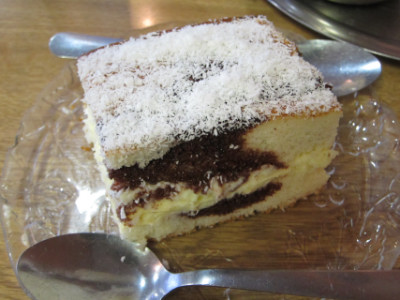 Coconut cake is not on the menu but is sometimes served

The Coconut Marble Cake was very fresh and made in house. I liked the fact that it was not super sweet but it was full of flavor. 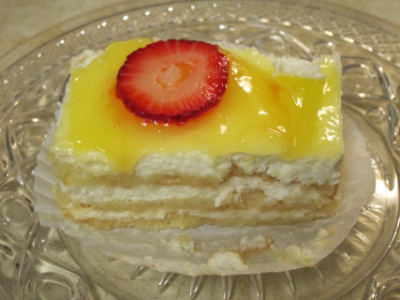 Lemon cake is not on the menu but is sometimes served

The Lemon Cake was probably my all time favorite. Lemon is usually a favorite of mine, but this one was done so well it was a special treat.

Others I have tried include Custard, Mille Feuille, and Rice Pudding (I do not think you can go wrong with any dessert that is served here).

Other Observations
They have changed the tea from the one shown in some of the photos served in a pitcher and made with mint and sugar, to one that is more similar to the tea served in other restaurants. I think this was a step away from authenticity, although the new tea is good.

I think my main observation about Cous Cous Cafe is that they have made a greater attempt than most restaurants to serve authentic ethnic food, resulting in some very good taste experiences that I would not have had otherwise. This is a small restaurant and they are not trying to reach the mass market (as a result I think they have to limit the availability of some items because of the amount that they can sell). The tagines and other main items here, though, have been popular enough to keep them in business for over a decade, and I know this is not based solely on their Moroccan customers.