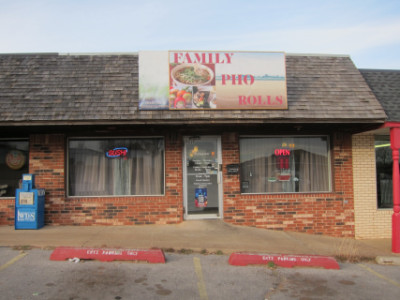 Family Pho and Rolls follows a popular trend in serving both Vietnamese food and sushi (at least the style of sushi that includes California rolls, etc.). Outside of a couple of Chinese restaurants I think this is the only Asian restaurant in Weatherford, so I think it makes sense for this restaurant to provide any other dishes they can that would be popular in this small college town.

While Chinese food tends to become more Americanized in smaller towns, Vietnamese food has tasted pretty much the same everywhere I have tried it (but the menu choices are more limited in small towns). This is good for me because I love what most Vietnamese restaurants are serving, and these tend to be reliable choices even where Chinese restaurants are not. Family Pho was exactly as I thought it would be–good food but with a rather small menu.

After my comments about Chinese restaurants I need to point out that I have liked the ones I have tried in Weatherford. My favorite place in town, Young China, has closed, but the people at Family Pho told me the owners have now opened the Hibachi Buffet. 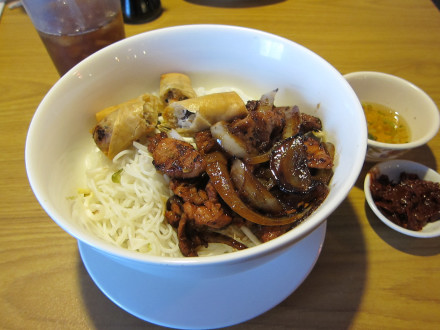 The type of dish I was wanting happened to coincide with what seemed to be the restaurant’s special dish, the House Vermicelli. This did not come with my normal choice of chicken, but the pork they served had a very good flavor and is another type of meat I like. It had the added benefit of an excellent spring roll. The fish sauce was very good, and I especially liked the chile sauce (which can be seen in the small bowl on the lower right side).

Two things I normally like in a vermicelli bowl were lacking–peanuts and mint. Everything else was good enough that it pretty much made up for these deficiencies (I can say for sure that the spring roll was more satisfying than the peanuts would have been). Overall this was definitely a very good vermicelli dish.

Tea
I was disappointed that they did not have any hot tea, but iced tea was available. I would say this made the restaurant somewhat Americanized, but the food was good and it did not have a great impact on the meal.

An Assessment
Everything I had was good, but the negative aspects were the things I was not able to have (peanuts, mint, hot tea, etc.). In spite of this I would not hesitate to come back. At restaurants I usually like to order things again that I enjoyed previously (in this case it is the House Vermicelli). They do have other types of vermicelli bowls, though, as well as other items (mainly the pho and rolls implied by their name).