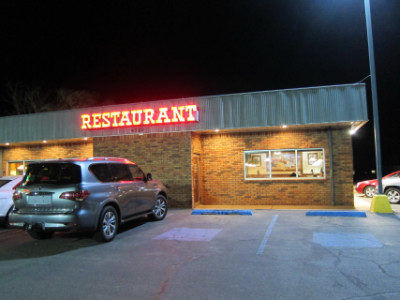 Probably the biggest factor that makes Cook’s Restaurant popular is the fact that it is open from 6:00 A.M. to 10:00 P.M. daily (and open 24 hours Thursday night through Saturday night-Sunday morning). This is a diner and truck stop located about halfway between Clovis and Texico, New Mexico, but is close enough to Clovis to be considered one of the city’s local hangouts.

When I entered the restaurant somewhat close to 10:00 P.M. (on a day they were open 24 hours) one side of the restaurant was filled almost to capacity (the other side is presumably open when they are even more busy such as at breakfast time). I did not make note of whether breakfast is only served during certain hours, but it seemed to be a large part of the food served here. In talking to the employees they indicated that some of the breakfast dishes were quite popular.

I also noted that over half of the late night crowd appeared to be eating Mexican food, so I naturally assumed this was one of the most popular items on the menu. They do have a large menu of American diner-style items, so I think there is something for everybody here. 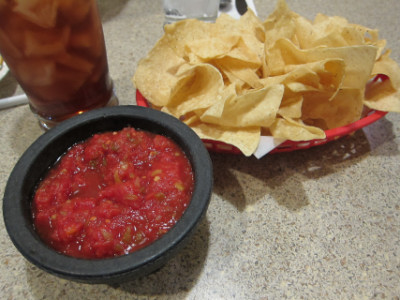 Having decided to order one of the Mexican dinners, I was given some chips and salsa which turned out to be excellent. The salsa was not on the spicy side but had a robust flavor that I would call New Mexican style (the chiles were fresh and seemed to be sourced from somewhere nearby). 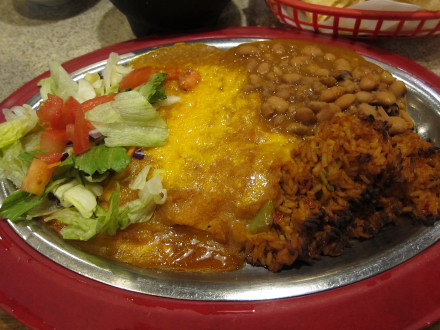 I do not remember the entire Mexican food menu, but the best options seemed to be a choice between red enchiladas or green. I chose the Red Enchiladas which were served with beans and rice (they said the green was not spicy). I noted on the menu that the dish came with “Red Chili” (the Americanized spelling of “chile”) so this was somewhat of a red flag, but is really the standard spelling I have seen in eastern New Mexico.

The beans were good, but the rice was burned along the edge (about half of it was edible).

There was really nothing else open at that hour and I was glad to get a meal. Enough of it was good that I enjoyed the food (particularly the chips and salsa). For New Mexican food, though, I had a better experience at Leal’s (located a couple of miles west on the same highway but not open as late in the evening).