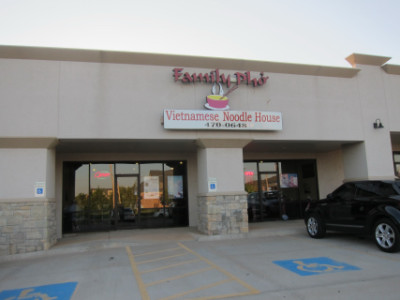 Update Dec. 2020: Family Pho is open but is doing takeout and delivery orders only.

Family Pho is a small family run Vietnamese restaurant in a strip shopping center that is really not typical of other such restaurants. They do not serve the pseudo Chinese food found in most strip mall restaurants (the food here is strictly Vietnamese). The flavors are authentic (as far as I can tell), and the menu is closer to the restaurants in the Asian District than to other strip mall restaurants. They definitely do not have all the menu items served in the larger Asian District restaurants, but the pho selections are very good, as are the rice and vermicelli dish choices.

I am encouraged about this type of restaurant because the clientele is overwhelming non-Vietnamese, yet the menu is easy to navigate for both those who are Vietnamese food experts and those who really do not have much knowledge about it. My advice to first time diners would probably be to try the pho–not only because this is the restaurant’s specialty but also because I think this restaurant has a very good version of it. 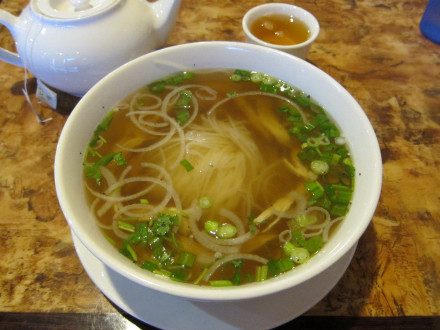 So far I have only tried the Pho Ga, or the chicken version (chicken breast meat in a chicken broth). This is not a slap at the other types of soup at Family Pho, it is because I find the chicken pho disappointing at many restaurants and I am very glad to find one that is good. The flavor is quite good, but probably more important to me is the fact that I do not detect MSG in it (although I believe it is in some of the restaurant’s items).

The chicken pho has a chicken broth and white meat chicken as the main soup ingredient. Other types of non-beef soup are also available, including vegetarian, shrimp, and seafood.

They told me that one of the “secret” ingredients in the soup that makes it so good is cinnamon, although it is not obvious when tasting it, and this is just one of the ingredients used to make the flavors balanced. 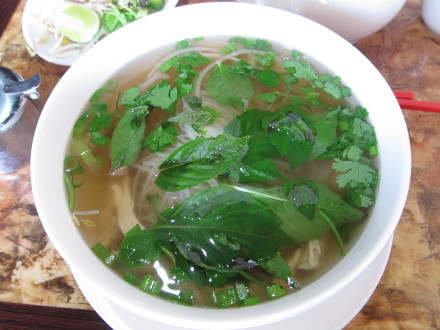 Of course I like to add the condiments served on a side dish including the basil and bean sprouts. 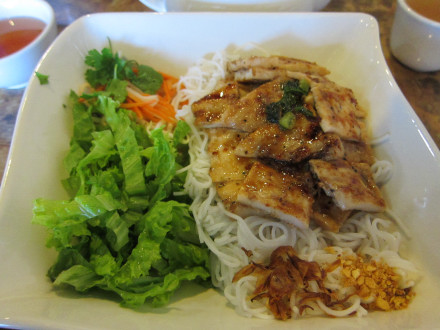 There are not many suburban restaurants that have a Lemongrass Chicken Vermicelli Bowl, but Family Pho has it (as well as lemongrass beef). This is also one of my favorite items here, although it did have the shortcoming of not having mint as one of the ingredients. The rest of it, though, is good enough for it to stay on my “want to order” list. 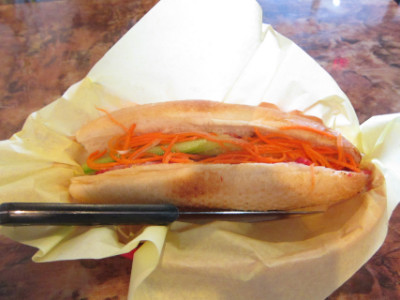 Although I did not order the sandwich myself, I have a photo of it as well as a recommendation to order it. 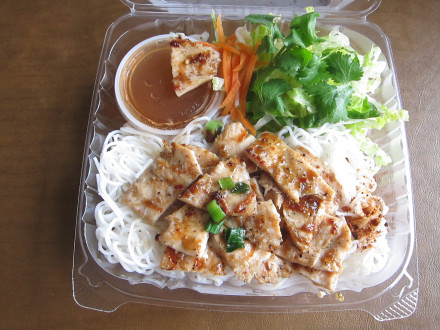 I found out that the takeout version of the Lemongrass Chicken Vermicelli Bowl is as good as the one in the restaurant, and in this case may be even better. This one had mint (something that was previously missing in the restaurant version), and everything else was excellent. It was a little short on the lemongrass flavor, but it was certainly a main part of the dish and there was enough to do the job. The chicken, sauce, noodles, etc. were all excellent. This was easily one of the best items I have had from Family Pho, even though I did not actually eat it in the restaurant.

Another factor to consider with this dish was the fact that it left such a pleasant aftertaste with me that I did not want to “spoil” it the rest of the day with any other food items including dessert. I would judge the fish sauce, chile paste, and the dish itself to be among the best I have had anywhere, and to have such a meal at home was a special treat, especially compared to the other takeout items that are available. The chile paste was something I requested and is not normally included in the orders, but I would definitely recommend it. 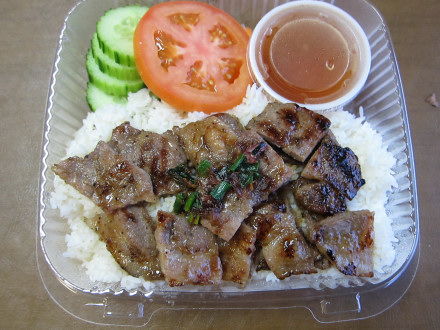 On my takeout orders I sometimes like to try a second item (besides my normal lemongrass chicken) for another meal. In this case I got the Grilled Pork Rice Platter which is much like the vermicelli bowl but the condiments are different (as well as being served on rice instead of noodles). The pork seemed as good as the other meats, but I think you just can’t beat the meats with lemongrass (I think it is available on the chicken and the beef). The cucumber and tomato were a nice change that I enjoyed. The down side to this dish was that it seemed to have MSG (although not in a great amount as I sometimes find in Vietnamese restaurants–particularly the ones in the Asian District).

Recommendations
My best experience at the restaurant was the chicken pho, but the takeout version of lemongrass chicken during the pandemic stands out as the most memorable meal I have had from Family Pho. A repeat order fell a little short because I forgot to order the chile paste, but it was still good.

On my last visit in December 2020 Family Pho was still doing takeout only when most other restaurants had opened their dining rooms. The only reason this really makes a difference is that Vietnamese food can get a little complicated and for me the biggest issue is that at times I have forgotten to order chile paste (and they do not include it with takeout orders unless you ask for it). Sometimes I have also had to ask for more peanuts on the vermicelli bowl–something that is easy to remedy when eating in the restaurant but not so much on takeout orders.

The manager advised me one time that the fish sauce has MSG. This is something that has not been an issue with me until one time when I ordered the grilled pork and it apparently also had MSG, giving me a big enough dose to give me a reaction. I do not think this has ever been an issue for me with the lemongrass chicken, though. The chicken pho is a dish the restaurant says does not have any MSG. 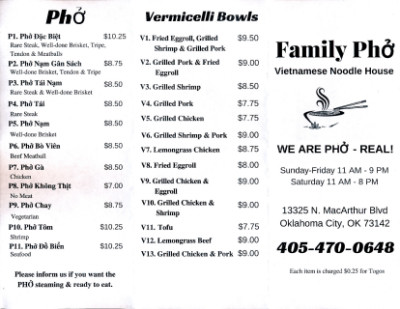 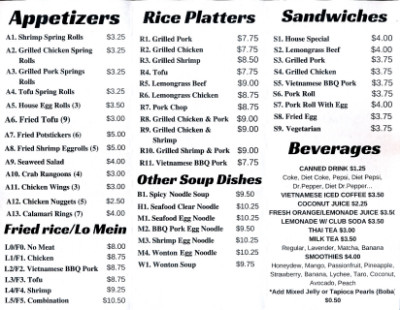