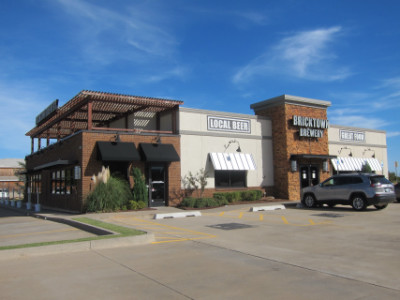 Update Sep. 2022: The Hatch green chile burger was removed from the menu at all Bricktown locations in 2021. Because of this I am lowering the rating of the restaurant from 24 to 23 (even without the green chile it is still a pretty solid hamburger, but I think would not be as special as the one I ate).

Bricktown Brewery is what I would call a mini-chain that started out in the Bricktown district of downtown Oklahoma City and which is now expanding statewide and into neighboring areas such as Fort Smith, Arkansas (and I see on their web site that they even have a location in El Paso). Perhaps El Paso was the inspiration for their Hatch green chile burger which I really liked.

According to their web site they specialize in local and craft beers, but my report is only on the food. Somehow the name “brewery” conjures up an image of cheap bar food to me, but I found out that it is also a serious restaurant. I do not know if it would be classified as “elevated,” but they do standard American classics very well (as well as some special items such as the aforementioned Hatch green chile burger.

This location of Bricktown Brewery is in the building where Tommy’s Italian-American Grill was located, and Tommy’s wood fired oven is now used to cook the pizzas on Bricktown’s menu. I have not tried the pizzas, but at least I know they have the right kind of oven for it.

This is a sports bar in the sense that they have TV screens with games being played, but I was not aware of the sound being on or anything that would distract me from having a normal dining experience. 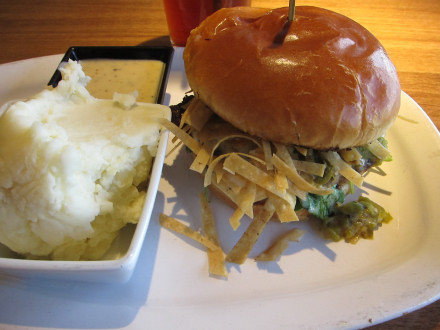 The menu’s description of the Hatch Green Chile Burger lists queso, tortilla chips, and arugula. This sounded somewhat suspect, but somehow it came together very well for an excellent green chile cheeseburger (with queso instead of sliced cheese). The real flavor of the sandwich was in the meat, which was obviously a high grade cut of beef. Of course I loved the Hatch green chile, but I was eating it on top of a very high quality sandwich and not just for the sake of having green chile. The chile was spicy, but I think the queso cuts the heat somewhat so that it would not be overly hot even for those who are not as accustomed to a high spice level as I am. In all, this was an excellent sandwich, and really one of the best I have had in OKC.

I was glad that there is a choice of other sides besides french fries. The Mashed Potatoes tasted freshly made. 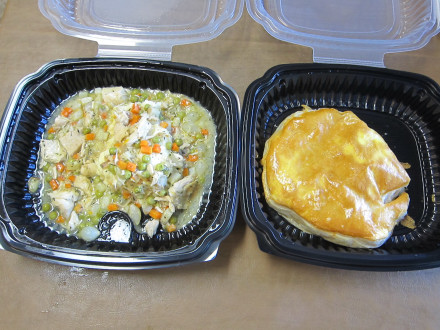 I picked out the Chicken Pot Pie for take-home because the waiter said it would be fairly good reheated. I did think it was fairly good, but I think it would have been better if eaten when it was freshly prepared. Having said that, I thought the main problem was that it was heavy on the mashed potato content without a lot of flavor to spice it up. Still, though, it was enjoyable and makes a good meal. 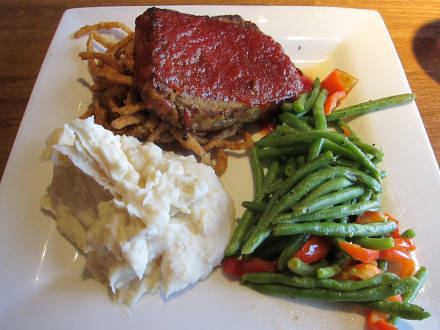 One dish that almost everyone seems to recommend is Big Mike’s Meatloaf, and fortunately it was available as a half order on the lunch specials. That is, the meat is half the amount that comes on the big plates, but you still get mashed potatoes, green beans, and frizzled onion strings which make this seem as if it should be the dinner size.

The meat consisted of Black Angus beef and ground pork, and it was excellent. It had a crust around the edge with the inside being moist, and I thought it was cooked just right. Where I felt a little disappointed was with the sauce, which I thought was overly sweet. I grew up with my mom’s meatloaf but I do not have a lot of experience with it in restaurants, thus I do not know if this really was some of the better meatloaf in town as many consider it to be. I just know that it was good quality, but for a flavor experience I still think the Hatch green chile burger is definitely the most memorable.

They allow substitutions on the vegetables. The waitress suggested that I stick with the green beans, and this was a good call. They had a very good flavor, and were just right in terms of getting enough crunchiness but not too much. 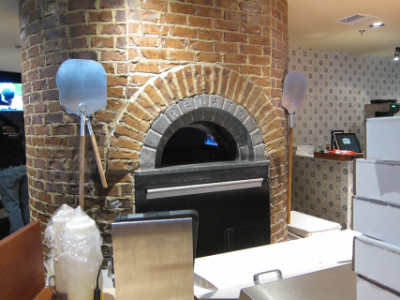 Pizzas are not served at every location, but are available here thanks to the brick oven they inherited from Tommy’s Restaurant.

Other Observations
One of the important features here is a comfortable dining room–this includes the seating, the service, not too much noise, etc. The wait staff gave me very good suggestions when I had questions about the menu.

Because of the quality of the hamburger (including the patty, queso, green chile, etc.) I almost felt that this was a fine dining restaurant. Actually it is downscale but they just give you very good quality. I liked the way they flavored the burger but thought the chicken pot pie could use a little work. The meatloaf is very solid, and based on all these dishes I would guess that other items such as the pizza would be very good as well.