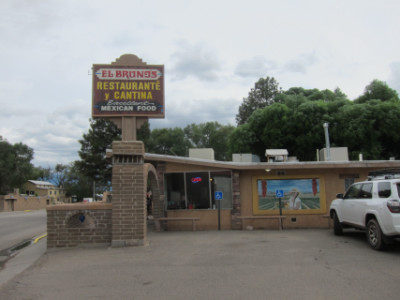 I have made two treks to Cuba, New Mexico in recent years in which I stopped to visit the famous El Bruno’s Restaurant (famous to me, at least, because I read about it on Gil’s Thrilling (And Filling) Blog). The trips happened to be thirteen years apart, and in this time the original restaurant burned down and was relocated across the street (there is only one main road in Cuba, so you are technically correct when you say it is across “the street”).

On my first visit in 2006 I stopped to buy some salsa, but I was so impressed by the restaurant itself that I took photos of the restaurant and patio area to catalog its New Mexico style architecture and decor. I have included some photos from the old restaurant farther down on this page, and perhaps some readers will remember the original El Bruno’s. When I heard about how devastating the fire was, I was surprised that the mural from the old restaurant remained intact (and is shown in both the before and after photos). The new El Bruno’s has a pleasant patio area, but I am still a little saddened by the loss of the old one because it was such a special atmosphere. 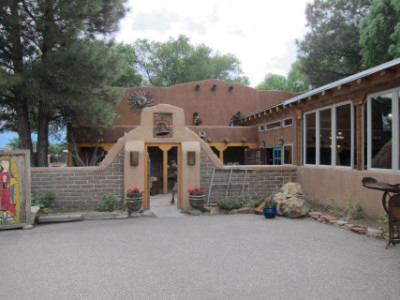 When El Bruno’s moved across the street I understand that it took over a former Tastee Freez, which is now the kitchen area. They expanded this area with the addition of a large dining room and patio area. El Bruno’s also has an Albuquerque location, but for anyone who goes to the restaurant in Cuba I think they will find the setting especially relaxing and enjoyable. 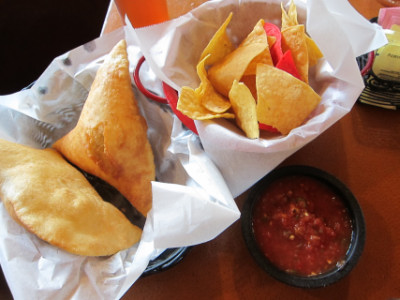 They brought out the sopapillas with my meal before I could really dig into the chips and salsa. The chips and salsa were excellent, but especially notable to me were the very flavorful and fluffy Sopapillas. 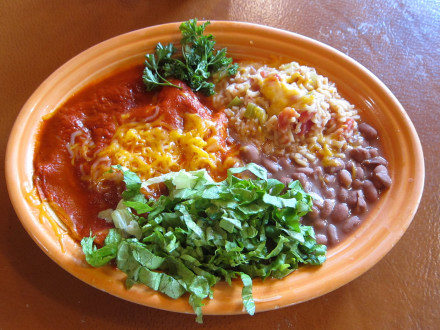 There was a mix-up on my order because I ordered Enchiladas with blue corn tortillas but they came with the regular tortillas. They were happy to correct the mistake, and in the meantime I ended up with photos of both versions. 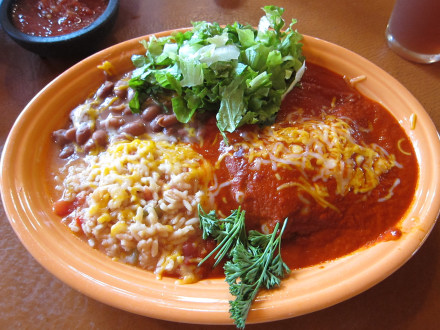 The Blue Corn Red Enchiladas did not look much different outwardly, but the blue corn flavor was really excellent (for some reason they seemed to have more flavor than some others I had tried). In addition, I liked the fact that both these and the enchiladas with regular tortillas were served flat without the customer having to ask for it, and that the sopapillas were brought to the table at the beginning of the meal. These are important parts of what I conceive as traditional New Mexican cuisine.

The most important part, of course, was the chile. I decided to go with the red chile because this is almost always what I like best (and I believe the reviews indicated that this was the best one to order). I thought the flavor was very near the top of all the ones I had tried in New Mexico in recent years. I have not made it to The Shed in Santa Fe or some other restaurants where the chile might be a little better, but honestly I do not know how anyone could make it any better than at El Bruno’s. The sauce had a deep red color, it was spicy to just the right point, and the flavor seemed to include enough spices to make it interesting but it had nothing that detracted from the chile flavor. As far as I was concerned, these enchiladas gave me everything I could want in a New Mexican style meal.

The cheese was very good as well (something that cannot be taken for granted at all restaurants). Along with the excellent sopapillas, these enchiladas seemed perfect to me. 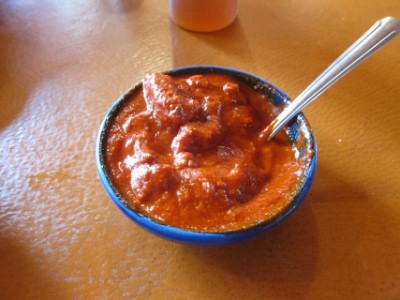 Meat sauce in a side dish

There was one twist to my order, however. They asked if I wanted it with meat sauce, and I said no but please give me a little bit in a side dish so that I could try it. They also mentioned that more people ordered it with meat sauce than with the plain (vegetarian) sauce.

The above photo shows the small bowl they brought, and I tried it both in the bowl and on the enchiladas. According to the menu, the meat is the Herrera family’s favorite red pork chile recipe. I liked it in the bowl, but on top of the enchilada it changed the flavor so that other flavors did not come out as much, and I was glad that I had only ordered the meat sauce on the side. There are some restaurants where I think the meat sauce has a better flavor than the plain sauce (notably Mary & Tito’s in Albuquerque). At El Bruno’s, though, I definitely thought the regular red chile sauce was the one to get.

The beans and rice were excellent, but I was more focused on the sopapillas which really were an excellent enhancement to the enchiladas.

Photos of the Old Restaurant 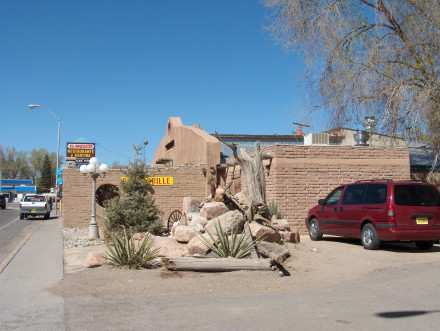 I took photos of the old restaurant in 2006 shortly before it was destroyed by a fire. This building was located on the east side of the highway, while the current building is across the street on the west side. 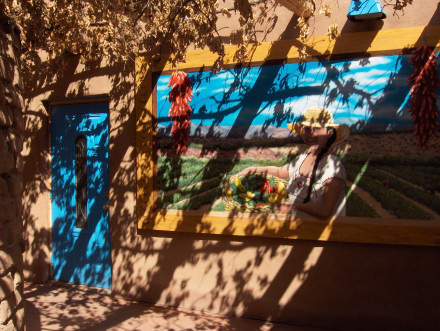 Mural at the old building

This mural fascinated me so much that I took a photo. Fortunately it survived the fire, and now is at the new restaurant. 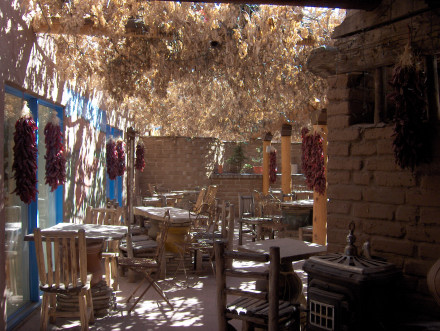 The patio at the old restaurant

The patio at the old restaurant seemed like a very relaxing place to eat a meal or spend some time, but at the time I was only able to buy some salsa and then be on the road again. Fortunately they were able to rebuild, and now have a restaurant in Albuquerque as well.

Other Notes
Enchiladas are the item I order at almost all New Mexican restaurants, so my rating of this restaurant reflects how I think the enchiladas compare with others I have tried. I did not try the green enchiladas, but they have good reviews (I just happen to prefer the red at most restaurants).

The red chile was spicier than many I have tried, to the point that sopapillas with honey caused a noticeable cooling of the mouth (the reason I do not wait until dessert to eat the sopapillas). However, the chile was definitely not insanely hot, and I think they did it just right not only on the flavor but also in its heat index. A wide range of items are listed on the menu, though, where it looks as if you can get different heat levels down to none at all if you wish. 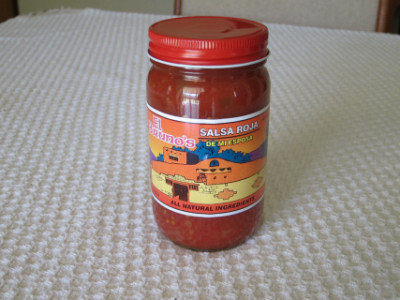 Their Salsa is for sale in jars at their Cuba and Albuquerque locations. Like all salsas in a jar I do not think the experience with it is exactly like eating fresh salsa in the restaurant. I like this better than most comparable ones, though, because it has the type of traditional flavor you get from restaurant salsa (a tomato like base but more spicy than the salsas from outside New Mexico that have this type of base). There are plenty of chunks of New Mexico green chile inside–I wish there were more of them, but on the other had having more would make the salsa disappear faster as I dip into it and put out the large chunks first. Overall this is near the top of my list of New Mexico salsas in a jar.