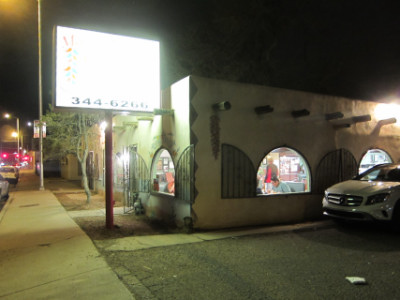 For an in-depth review of this fabulous New Mexican restaurant I would refer the reader to the one on Gil’s Thrilling and Filling Blog. In fact, Gil’s recommendation is the reason I visited this restaurant on one of my all too infrequent visits to the Duke City. There is not much reason to go over territory already covered in his review, but I wanted to experience Mary & Tito’s food for myself.

Gil proclaims Mary & Tito’s “THE very best New Mexican restaurant in the world!”, and as of now I know of nothing that could contradict this. Gil says it took him 45 visits to sample every item on the menu, while I have only tried two, but I have come to the same conclusion. As always, though, I will continue to either try to prove this hypothesis correct or find another one that could reach an even higher level of excellence. 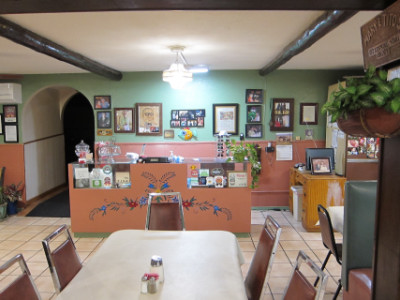 Knowing how popular this restaurant is, I was a little surprised when I saw how small the dining room was. Going on a Friday night, though (one of the only two nights it is open past 6 PM), there was a table available. The above photo was taken near closing time when the restaurant was practically empty, but I think this is very rare. One thing to keep in mind when visiting New Mexican restaurants is that having a place this small usually means there is very good control of the food going out of the kitchen, and it will probably taste the same no matter when you visit. 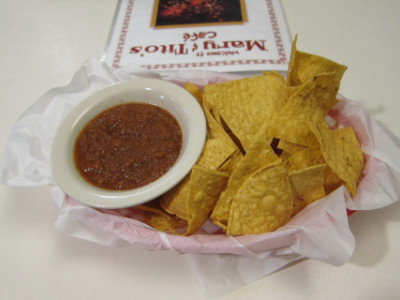 I do not have many comments about the chips and salsa except that they are excellent, and the salsa is not so spicy that it will numb your mouth before you get a chance to taste the food. 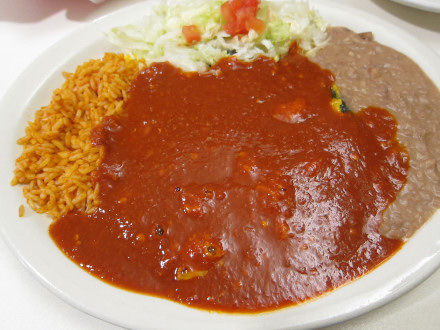 Ordering Enchiladas is relatively simple here. The two things that are the most important to me are standard–the enchiladas as stacked and they come on blue corn tortillas. Neither of these are very common in Las Cruces (where I have most of my New Mexican meals), but they are things I really appreciate when traveling north. Knowing that I wanted to order red chile (on Gil’s recommendation) made it all that much more important to have blue corn tortillas, because I think this is one of the best flavor combinations in New Mexican cuisine.

The only real choice involved with the enchiladas is whether you want red or green chile and whether you want it with meat or no meat (you can also get “Christmas” with half red and half green sauce). My photo is different than the ones on Gil’s blog, though, because mine is meatless (I believe all of his photos show the sauce with meat). This was frankly somewhat of a surprise to me because the meat version of red sauce is very unusual in New Mexican restaurants I have visited. Because my dining companion ordered the version with meat I was able to sample it and determine that this was the best choice, and I’m sure this will be what I order in the future. There is something about this flavor combination that goes together much like I find with the red chile and blue corn tortillas. 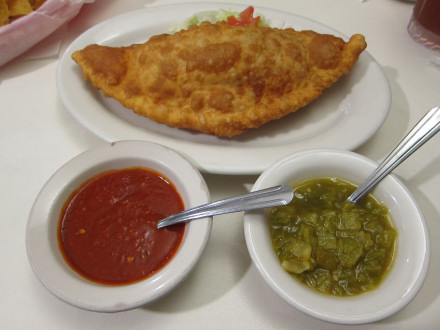 Mexican turnover with red and green sauce on the side

Another unusual thing about this restaurant was the name Mexican Turnover which is usually called a stuffed sopapilla in other restaurants. If it is possible for anything to be better than Mary & Tito’s enchiladas, though, it would be this. The waiter suggested that I get the sauce on the side since I wanted to try both the red and the green, and I also ate part of it without the sauce. Eating it plain gave me a greater appreciation of just how good the sopapilla was, and having it filled with pinto beans was just the way I liked it. In a way I would say the turnover was better than the enchilada, but really this is almost an impossible choice to make.

Other Notes
I do not have a preference between the enchiladas and the turnover, since I really liked both equally. There are several versions of each one, with different sauces, meats, etc. I think the best sauce is the red chile with meat, especially on the enchiladas.

I thought the green sauce was also excellent, and to me it tasted better on the turnover than the red (both were plain sauces without meat). This is not a conclusive test of one sauce being better than the other, but only that with the sopapilla I think green is a good choice.

The restaurant is justifiably proud of its red sauce, and the waiter explained how they used dried chiles that were then reconstituted into a sauce while adding their special spices to it. Because of this process red chile can either come out very good or very bad at New Mexican restaurants, but at Mary & Tito’s it is arguably the best. At least I think each Mexican food lover owes it to themselves to try it. It is not terribly spicy, but the emphasis is on flavor.