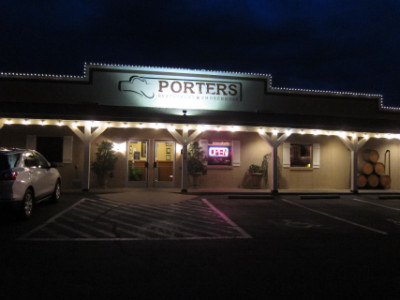 First of all, I want to clear up some confusion about what Porter’s is. The official name of the restaurant is “Porter’s Restaurant & Smokehouse.” When looking at different web sites I saw that it was everything from a steakhouse to an American restaurant to a barbecue restaurant. The answer is that it is all of these things under one roof, and I think they must be awfully busy preparing all these different types of food. After examining the menu, though, I asked one of the employees if this was a steakhouse that had barbecue or a BBQ restaurant that had steaks, inquiring about the restaurant’s true specialty and what is popular with local people. Her reply was that it was a barbecue restaurant that had steaks, keeping this in context that she was only saying what was most popular and not necessarily what was the best food.

A second question some may have may be “why was I in Farmington in the first place?” All right, this is probably not a question anyone has, but I will give an answer anyway. It is quite notable that Farmington has one of the last remaining K-Marts in New Mexico, and in fact in the entire country. Last year I visited the K-Mart in Roswell which has since closed, and it is very uncertain what will be the fate of the remaining stores. It seems that the K-Marts have items that you cannot find anywhere else because of the fact that they do not jettison items as quickly which are not the top sellers, while the typical big box stores do not have as much patience for anything which is not earning them the top profit margins. K-Mart has good items, but just ones that are harder to find.

Also pretty hard to find, though, is good barbecue. New Mexico has become one of the top barbecue states in recent years, but of course not all restaurants in any state are of equal quality.

I told the staff that I was from Oklahoma and that I had high standards for barbecue, and after the meal I let them know that this restaurant passes the test. I would classify it as Texas style barbecue rather than Oklahoma–two of their best items are beef ribs and brisket which are known as being Texas specialties. I could not pin down the origin of the sauce but it was more spicy than in most Oklahoma restaurants (and more spicy than most I have tasted in Austin).

Moreover, I found out that their most popular item was the beef ribs, and that people literally make trips from all four of the Four Corners states to eat it. This is not a reflection of there being very little competition, but the fact that these ribs are so good that really anyone would come here who had a reasonable means of doing so. I did not know any of this before coming to the restaurant, but I am glad I found out.

The staff also let me know that the beef is locally sourced, and I think that not only the beef BBQ but also the steaks are known to be of very high quality. 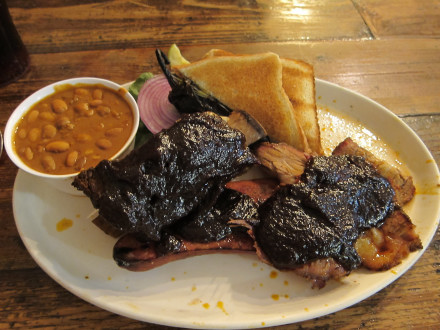 First of all, I should disclose that this was not my meal for the evening. Having previously eaten at El Bruno’s in Cuba, I had only samples of the meat while my friend and traveling companion (also named Steve) ate most of the meal. The BBQ plate includes three meats which are your choice, and you can choose side dishes as well. I do not remember whether Steve asked for recommendations or not, but I believe the rib and brisket are always his first choices at barbecue restaurants. I did not eat very much of any of them, but I thought all three meats were very good.

Of course I discovered that the Beef Rib is the restaurant’s specialty. This item is almost non-existent in Oklahoma, although I have had some recently in El Paso (which largely serves central Texas style BBQ). The beef rib at Porter’s included a very large portion of fat, but there was enough meat for both of us to cut off a reasonable serving and to be very satisfied (although I had a smaller appetite as was satisfied more easily). This was honestly the tenderest and most flavorful beef rib that I think I have ever eaten, and it was through asking the staff how they did this that I found out about the local sourcing of the meat.

The Brisket had a very good quality that I almost never get in Oklahoma, and which is not universal in the Texas barbecue world which includes El Paso. This was also a very good barbecued meat, which I would get as a supplement to the ribs (also in contrast to the rib’s high fat content, the brisket is very lean).

The Sausage was also very good, and I would say it was one of the best I have had anywhere. However, I am not that big a fan of BBQ sausage, so for me this was another item which took second place to the rib.

The sauce had a very good bite and in Oklahoma I would classify it as “spicy,” although it is not really at the level that New Mexicans think of as being extra spicy. The sauce went very well with the rib and sausage. For anyone who happens to see this blog before going to Porter’s, though, I would say to order the brisket plain with the sauce on the side. This brisket most likely would have been very good plain without any sauce, but I did not get to taste it this way.

The restaurant does give you a choice of whether you want sauce on the meat, on the side, or not included. I did like the sauce on the rib and the sausage.

Other Items
There is a popular buffet which I think includes all the BBQ items but not the steaks. I believe they also have regular meats which are not smoked on the menu and the buffet. The buffet is supposedly a bargain if you are fairly hungry. When I went the buffet was already closed (shortly before the restaurant’s closing time) but they did have the same type of soft serve ice cream machine I find at many barbecue restaurants in Oklahoma.

Summary
I did not have a large sample of this restaurant’s food, but I did try the beef rib which is what people “drive from Durango” in order to eat. This was an exceptional rib, and even more so because it had enough meat to satisfy what I would judge to be a normal meat portion when I consider the size of an average meal.

My other general recommendation is that prices here are extremely good for the amount and quality of food that you get.

There are other barbecue restaurants in Farmington that come up higher on the Yelp ranked list of restaurants, so I cannot say which one is actually the best. For beef ribs, though, it seems to be Porter’s.