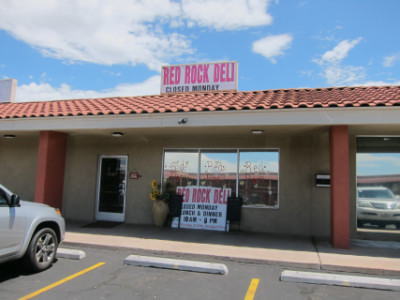 Mark, the owner of Red Rock Deli, seems to be the eternal optimist. While I say Red Rock Deli is closed on Monday, the Red Rock Facebook page says it is “open Tuesday through Sunday.” When I found out he actually spends weekdays in Blanca, Colorado working at his other business (Red Rock General Store) he said he is excited about both business opportunities, and that he enjoys the commute between them every week!

Actually I should point out that Red Rock Deli in Albuquerque is run by Mark’s wife, and the General Store in Colorado is owned by other family members (who also have a deli in the store and serve Polish sandwiches as the one in Albuquerque does). The Albuquerque enterprise resulted from Mark’s desire to operate a full blown restaurant with sandwiches and complete dinner plates. The restaurant is based on food from Mark’s native Poland, but he points out that he loves food from other countries too, and includes menu items from such countries as Germany and Ukraine. 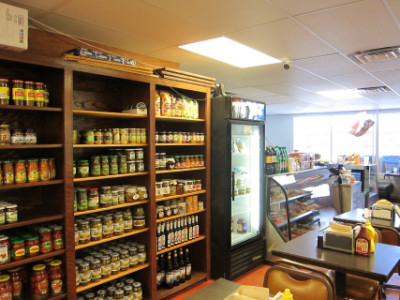 Displays in the store featuring imported items from Europe

Red Rock is also a European style grocery store selling such items as sausages, pierogi, jellies and preserves from several countries, candy, cookies, and much more. Mark said he makes periodic trips to Chicago (I believe every three months) to buy sausages, etc., and items on the shelves and in the freezer are all well within their proper shelf lives. Apparently there is a very high demand for his European delicacies resulting in a high turnover of the product.

Red Rock Deli used to be located on the far east side of Albuquerque, but recently opened a new store and restaurant on San Mateo Place just north of Interstate 40. It is open from 10:00 a.m. to 8:00 p.m. (closed on Mon.) and has table service for lunch and dinner as well as anything you would like to buy in the store to take home. 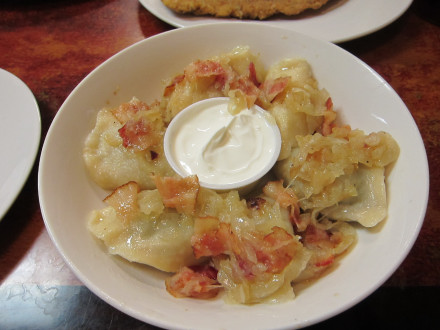 I was very happy for the opportunity to try Polish food for the first time since Maggie’s Cafe in Oklahoma City closed. I think if anyone had tried Maggie’s Polish specialties they would probably welcome the opportunity for more of the same as I did.

I immediately focused on two items at Red Rock Deli that corresponded to some of my favorites at Maggie’s–the stuffed cabbage (golabki at Maggie’s but I am not sure what it is called at Red Rock) and the pierogi. I think both would have been good choices, but my decision was swayed by the fact that the Russian Roulette pierogi plate had a sample of fillings with different flavors such as spinach, cabbage, sauerkraut, and potatoes with cheese. These are mostly evident only by cutting or biting into the individual dumplings to see what is inside (although I think the spinach one had a green color that could be seen through the dumpling). One of best parts of this plate was the variety, although I did like the spinach pierogi quite a bit.

Something especially recommended would be the optional onion and bacon sauce for the pierogi the restaurant makes in house.

I should note that they have frozen pierogi in the freezer section of the store which can be taken home, and I think these are also the ones served on the pierogi plate in the restaurant. Because of this I did not think the pierogi were the best items served at the restaurant, but the flavors were very good, especially with the onion and bacon sauce. 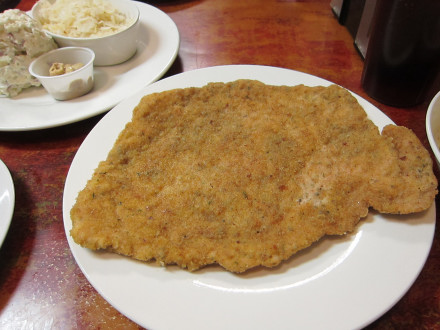 I was fortunate enough to be able to split two meals instead of just having my own, so I was treated to half of an excellent Wiener Schnitzel which I would say is the best item I tried. The meat was tender and the breading was excellent, as were the side dishes. The only comment I would make is to ask for a lemon slice to sprinkle on the schnitzel–to me this made it almost perfect (but the lemon is not provided unless you request it). 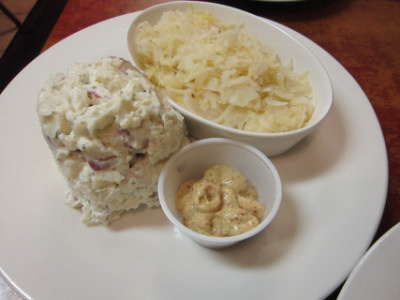 Of the three side dishes I thought the star was the Sauerkraut, which is made in house. This had the flavor I find in good versions of sauerkraut without the acid which is most pronounced in canned versions but which is also present is some home made varieties.

Although I was not a big fan of the Potato Salad my dining companion was, and I certainly did not dislike it in any way.

The German Mustard was very good but I did not find any items that were enhanced by adding mustard to it. 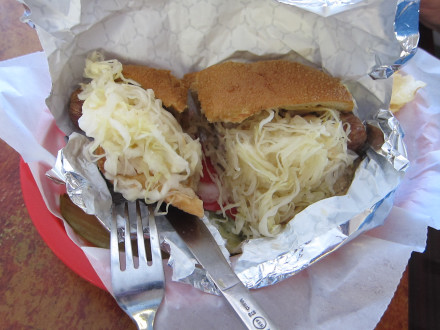 On my visit to the new store I tried the Guinness Beer Brat with Sauerkraut. This is called “Double Barrel” on the menu because you get two of them, but since this was a snack for me rather than a full me I just tried a portion of one of them. This was enough, though, to convince me of the excellent flavor. Although I really liked the sauerkraut and the spicy brown mustard, the big attraction for me was the sausage itself, which made me think you can indeed get authentic European sausage in the Southwest.

The “General Store”
The new building, like the old one, is filled with display shelves stocked with imported food and other goods from Europe. While most of it looked very good and would be very useful if I knew how to cook, I decided I could at least get good use out of the sweet items that were available here but probably nowhere else that I knew about. 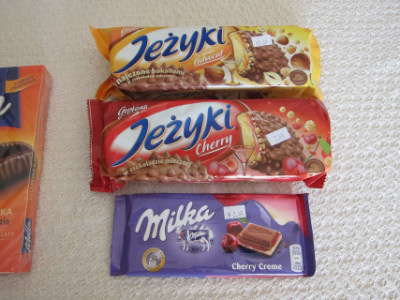 These are several of the cookies and candy they have available, but buying these was a shot in the dark from the vast array of items that are available. All of them made very good snacks, and I did not try anything that I would not buy again.

Items Previously Sold at the Eastside Store
There is one special item I bought at the old store, though, but could not find at the new one (perhaps it was there and I missed it). This was one of the more expensive candies, but I thought it was the best. 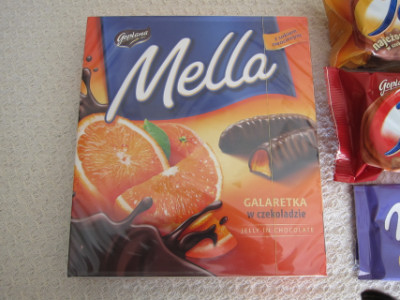 The Mella Galaretka w Czekoladzie (jelly in chocolate) came with 16 rather small but very rich pieces of chocolate candy filled with orange flavored jelly. It reminded me of the old orange slice candy I used to enjoy when I was growing up, except that the one here has a slightly more liquid texture (like a jelly). 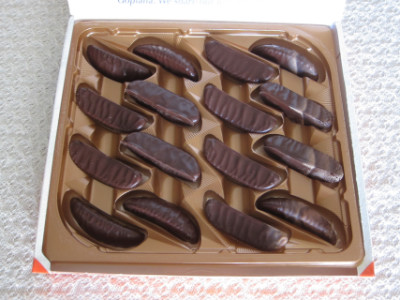 This is what the inside of the box looked like, and the 16 pieces lasted for a surprisingly long time. Even though I was taking a long time eating them in order to extend the time I could enjoy them, they stayed fresh for several months (they could not last indefinitely because they were too good not to be enjoyed).

I had never really explored the world of Polish chocolates before, but it turned out to be surprisingly worthwhile.