Skip to primary content
Down to Cluck
Delivery Only

Down to Cluck is one of the delivery options from Uber Eats, and when I ordered had its physical location at Henry Hudson’s on Hefner Road near Rockwell. Other delivery companies have the same or similar food available, but I believe it goes under various names. For instance, a Google search turned up Miss Mazy’s Amazin’ Chicken on Grub Hub listed under “Down to Cluck Delivery.” The Miss Mazy’s restaurants are also operated out of the various Henry Hudson’s locations.

I am not sure if the menus at Uber Eats and Grub Hub are exactly the same, but the food seems to be the same. For instance, “The Classic” on Uber Eats’ menu seems to be the same as “Miss Mazy’s Special” on Grub Hub. I would imagine that other food delivery companies have this food available as well.

Henry Hudson’s also houses some other delivery-only eateries such as Grilled Cheese Society, but their food does not appear to be on the restaurant’s menu when you go for dine-in. I think this and Down to Cluck are delivery only. 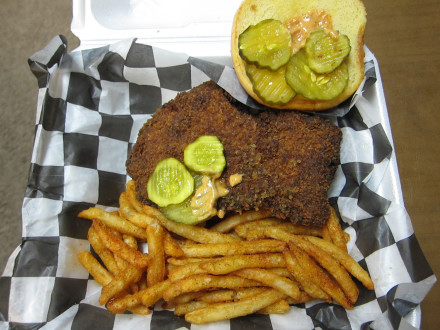 I remember several sandwich choices being available, with one being The Classic. This was described on the menu as having fried chicken, bread and butter pickles, and clucker sauce. The crust of the chicken was like a breading rather than the traditional fried chicken crust, and this may be one of the distinctions of this genre of chicken. The chicken was pretty impressive in its flavor and moistness.

I did not care for the breading as much as traditional fried chicken crust, but I expect that this one is more healthy. This would have been fine except that I thought the clucker sauce was very sweet and did not live up to the flavor of the sauce that was served on my sandwich from the Grilled Cheese Society. I had heard about similar sauces served on chicken that had an Asian element and might have had an “Asian fusion” flavor but this one did not seem to be such a sandwich. Still, though, the chicken was top notch and overall it was a good choice.

The Ghost Fries were better than I expected, and in fact are the type of fries I would like to find in more restaurants. The spice level was not over the top and I think the mainstream public would probably be ready for the ghost fries (and I thought the flavor was good as well).

Other Comments
The Miss Mazy’s menu from Grub Hub has some interesting looking items including some that seem to be Asian fusion (none of them are sandwiches though). For instance, the wings include Thai chili and teriyaki.

At present my first choice for delivery only food would be Grilled Cheese Society, but Down to Cluck also has some interesting looking options that I would like to try. The Classic sandwich is also something that I might very well order again.