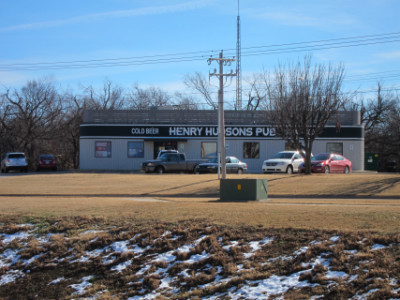 Grilled Cheese Society is a little bit different from most restaurants because it does not have a dining room or even a phone number that you can call. It is a virtual restaurant that operates out of Henry Hudson’s Grill on Hefner Road, but you are only able to order through delivery services such as UberEats. I have included Henry Hudson’s address so that readers can get an idea of their delivery area. The reality is that if you see the restaurant on whatever app you are using then they will deliver to you. Their home location is in Denver according to Google Maps, but at least for now they are located in Oklahoma City as well.

Their web site lists all the sandwiches available (there is a link to the menu through Google Maps at the bottom of this page). The food delivery app will tell you which ones are available when you order (I found that most of them were available). They seem to run a lot of “deals” such as free delivery, etc. where it ends up being less expensive than ordering from other places.

I would not call them actual grilled cheese sandwiches, but rather there are a variety of sandwiches that have the common denominator that they all have cheese. From my experience the food is good, and the cheese is more of an accent to the flavor than something that dominates it (they do have a traditional grilled cheese sandwich on the menu but it was not available the time I ordered). 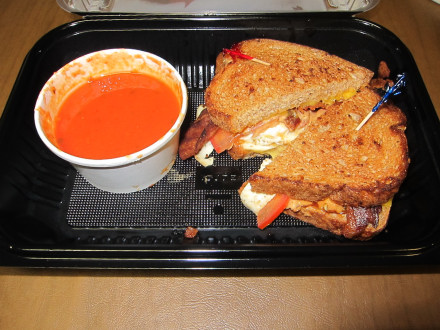 The Bambino melt has two fried eggs and bacon in addition to the American cheese. The reason I wanted to try it is that I wanted to try the Society Sauce which comes with this sandwich. The sauce was a little spicy with a very good flavor (I would almost say that it made the sandwich, but the bacon played a large role in that as well). The eggs had more substance than flavor, but were good as well. I usually like eggs so that the yolk is a little bit runny, but these were cooked so that they did not run (a very logical strategy when you are eating them on a sandwich, of course).

There is a choice of breads and I got the multigrain, which I would really recommend (although without having tried the others).

Soup
I had ordered the Tomato Soup thinking it might make another mini meal, but the size was more like what I would call a cup rather than a bowl. I ended up eating it with the sandwich and not having any leftovers–it was very good and I did not regret paying extra for the soup. The soup had a creamy tomato flavor that was enjoyable, but without green herbs floating around on top.

Other Comments
I do not know if they are trying this concept in Oklahoma City as an experiment, or whether it will be around for a while. I do think it is a good idea, though, and some of the other sandwiches look like ones I would want to try.

My only caution is that the sandwich seemed to be a better deal for the money than the soup was. The soup was a definite enhancement to the meal, and I was glad I got it. For those on a tight budget, though, it may be better just to get the sandwich (these alone pretty much give you a full meal).