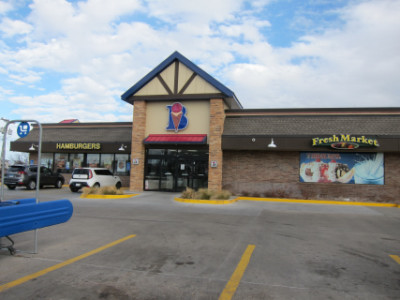 I have stopped at quite a few Braum’s while taking road trips, mainly to get ice cream or grocery items. In addition to the cartons of ice cream (not normally convenient for road trips), they also offer cones or cups of all the flavors they have available in the store. A separate ordering line for sundaes can be a special treat of which I seem to take advantage more often on the road than when I have easy access to the neighborhood Braum’s. I am not recommending this strategy to everyone, other than the idea that Braum’s stores are available in many towns within 300 miles of their headquarters in Tuttle, Oklahoma (near Oklahoma City).

My article about the Braum’s on Rockwell Avenue in Oklahoma City includes most of the items with which I am familiar. I am not big on the grill and restaurant side of it, but I am a frequent customer of the ice cream and grocery items. Occasionally I try something new on the road, as was the case in Amarillo. Each store, no matter how far-flung it seems to be from Tuttle, Oklahoma, sells the same items (although throughout the chain I think the larger stores carry more items than the smaller ones). The most important thing to me is that the ice cream always tastes fresh no matter which Braum’s sells it.

When I first came to this location I thought it was perhaps the farthest west outpost of the Braum’s empire (I almost have to use this kind of language to describe an ice cream company that seems to dominate the market almost everywhere it is located). I have since learned that the farthest west location of Braum’s is in Levelland, Texas, but at least for me Amarillo is the last chance to stock up on items as I head west out of Oklahoma on my normal route. 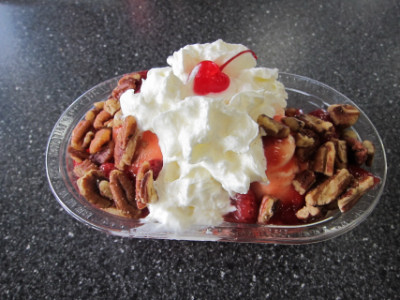 Ice cream cones or cups are a good treat when I am on the road, but this time I decided to try a Strawberry Sundae. This is not something I normally order at Braum’s (because I like the fudge so much). They have a Black Forest sundae that has both strawberry and fudge, but I wanted to see what it would be like with just strawberry.

It turned out to be very good (as all the sundaes have been at Braum’s). One thing I like about them is that you get two very large scoops of vanilla ice cream (or you can get a half order which of course contains one very large scoop of vanilla). The strawberry topping was very good, and all sundaes are topped with whipped cream and a cherry on top.

The only disappointment was the nuts. Normally they come with almonds. There was a choice to get pecans instead, which I decided to try. I did not think these were particularly flavorful pecans, though, and I wished that I had asked for almonds.

The Store
This store was well stocked with my favorite breads–Raisin Nut and Nine Grain. By “well stocked,” this includes having expiration dates that were far enough away that I could make the trip to El Paso and still be able to enjoy fresh bread

Additional Comments
I think there are four Braum’s locations in Amarillo, and I have stopped at two of them (the ones closest to Interstate 40). They both seemed to be well stocked in both groceries and ice cream. Other things I like to buy at Braums’s (but it is hard to do when I am on a road trip) include eggs, A2 milk, butter, and whipped cream.

My favorite “two scoop” ice cream combination is chocolate and orange sherbet, but on this trip I got a sundae instead.

The ice cream sandwiches are also better than most, but they only come in a package which I think contains six. These are very enjoyable, but not very practical for a road trip unless you have a way to keep them frozen until you can eat all of them (although on my last trip through Amarillo I managed to eat all of them with the help of a friend before they melted). I found out that they are still good when only semi-frozen.