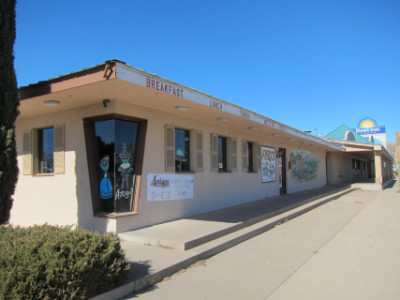 From reading various forum discussions about Roswell, one might think that it is a world class tourist trap that draws people in because of its UFO theme when actually there is “nothing to see here.” The fact is that there is probably not a lot to see unless you go for one of the annual events which take place around the Fourth of July weekend (I went to both the 50th and 51st Anniversary events and found them to be quite interesting). There is a museum and gift shop in town which I personally do not find to be as good as they used to be, although they are still interesting. In writing this article I noticed that my own mouse pad would be relevant to the discussion, which I am including just below. This is one I bought several years ago in the gift shop and I really love it, but the more recent mouse pads have been thinner with a design that is not as interesting (therefore I have passed on getting an update). 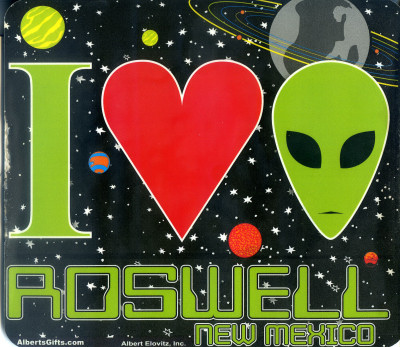 I think the truth about Roswell is that not many people actually go there, when they get there it does not take a lot of time to see the museum. I think the town itself is not trying to make a shameless plug about the UFO’s, but is merely advertising the theme of the town much as many businesses in Oklahoma City use the Route 66 theme in their signs and decorations.

Amigos Restaurant has paintings of aliens in its windows and has fun with the idea that they are our “amigos.” Although they are doing this in jest, I would say that this is a restaurant with serious New Mexican cuisine, and is anything but a tourist trap. I came here based on the information available on the Internet, and was pleasantly surprised that for once I could believe the reviews (my experience with southeastern New Mexico is that there are probably more disappointments with the New Mexican food here than meals that live up to the hype).

For some reason almost all New Mexican restaurants in the southeastern part of the state use a thickener in the chile (I think it is probably flour) and Amigos is no exception. What is an exception here, though, is that the chile was still quite hot and still had the New Mexico chile flavor. My preference is normally for the thinner, no-nonsense chile they use in places like Albuquerque and Las Cruces, but the one at Amigos tasted just find to me, and I really enjoyed it. 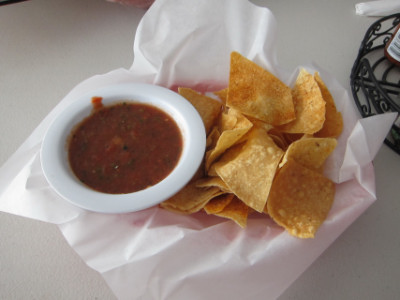 The Salsa was flavorful and spicy. I did not detect any jalapeños in it, but only bona fide New Mexico ingredients (sorry but I do not care much for jalapeños). The Chips had a seasoning on them (I think this is another characteristic of southeastern New Mexico food). I thought they were good and maybe even better than most that I have had. 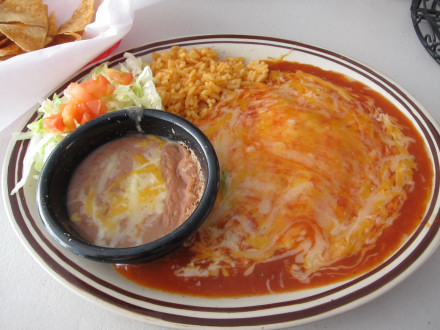 I asked the waitress whether she would recommend the enchiladas or stuffed sopapillas, because both are what I like to order when I am in New Mexico. I am not sure what basis she used for the answer but she said enchiladas, and my meal proved this to be a good choice (although I suspect the stuffed sopapillas are probably very good as well).

I ordered the Red Enchiladas, and I was happy that I had the option to order them flat. These were spicy with a chile level of 4 on my scale, but really bordering on a 5 (not many restaurants dare to serve this level of spice, even in places such as Albuquerque). The flavor of the chile was the real deal as well. There was a thickener in the chile which is common in southeastern New Mexico, but in this case it did not detract from my enjoyment of the spice and the flavor. What seemed to be missing (and this is a good thing) were cumin or other additives that would detract from the chile flavor. The restaurant used both yellow and white cheese on the enchiladas.

I did not write in my notes a rating for the Beans, but they were good. The Rice was a Spanish style like the rice I used to see in Austin, and it was good as well.

Other Notes
I have other favorite Mexican restaurants in southeastern New Mexico, but mostly it is because of the green chile or the fact that they have south of the border style food. Amigos is one of the few where I particularly like the red New Mexican style chile. 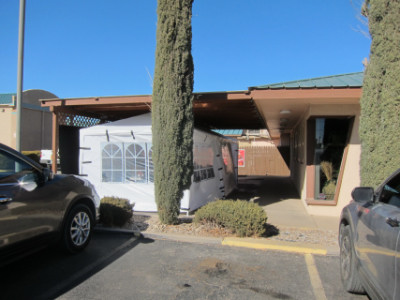 Amigos has added a tent for more comfortable outdoor dining

When I went the dining room was closed (as were all dining rooms statewide). They had a tent where they offered outdoor dining, and to me it was just as good or better than eating inside (I enjoyed the outdoor air). 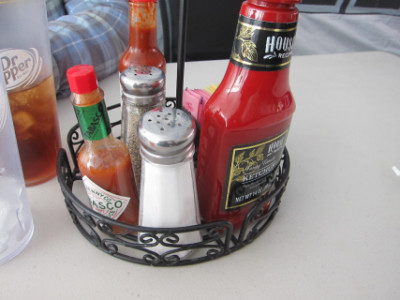 There is ketchup and Tabasco sauce available if you want it

I was somewhat puzzled by their condiment choice of ketchup and Tabasco sauce, although I think there are other things on the menu such as hamburgers where these items might make sense.

Update Mar. 2020: Their dining room is open again because the county is back to a yellow designation.