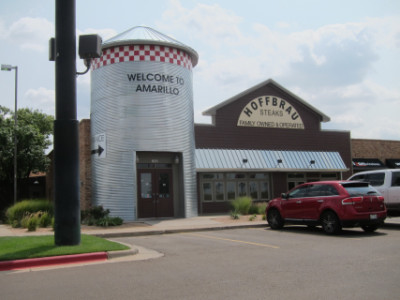 Located on Interstate 40, it is logical that a “Welcome to Amarillo” sign in front of Hoffbrau would greet a number of out-of-town visitors to this popular steak restaurant. Perhaps the somewhat legendary Big Texan Steak Ranch at the opposite end of the city has made Amarillo well known for its steaks, but as you drive through the surrounding cattle country it becomes very obvious that this is one of the region’s mainstays.

I went to Hoffbrau with some reservation, thinking that it was part of a chain that started in Austin and spread throughout the state. Actually the employees confirmed that it is not related to the Austin Hoffbrau at all, but does have three locations in the Fort Worth area. Amarillo and Fort Worth could have equal claim to being the steak capital of Texas, and even if Hoffbrau is technically a chain, the food at the Amarillo location seemed to be locally sourced and exhibited the characteristics of a local restaurant.

I will mention that although I was there during the lunch hour (lunch is served until 4:00 pm), the lunch menu mainly consists of hamburgers and other sandwiches. Although the choices are limited, there are some very good steak choices as well, and the prices are surprisingly good. 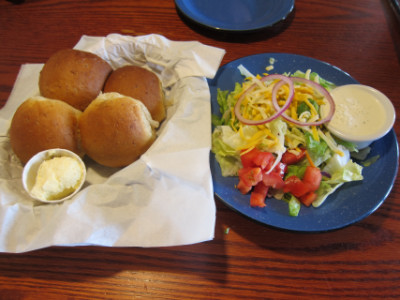 Soup can be ordered instead of the salad if you prefer. 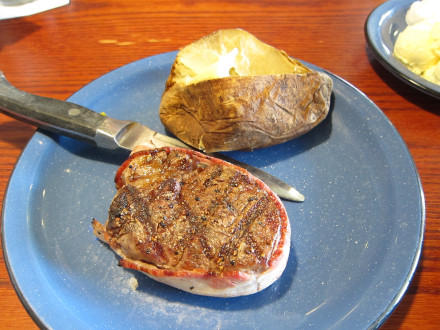 The Filet delivered everything I was expecting–flavor and good quality. Hoffbrau makes no claim that the steak is special in terms of being grass fed or anything like that. As someone who is pretty particular about steaks, though, I was very satisfied with it and would not be surprised if it were locally raised on their own ranch or came from their known trusted sources. It reminded me of the steaks I had while growing up–something that is not common enough in restaurants these days. 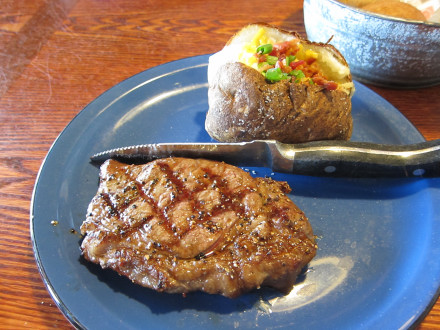 Ribeye on the lunch menu

With a limited number of choices on the lunch menu, I decided to order a Ribeye on my second visit to Hoffbrau (and yes, this means that the first visit impressed me enough to try it again). The steaks on the lunch menu are the same as their regular steaks, but in a smaller size. The smaller size and price were definite positives for me, especially while making a trip. I did have some reservations about whether a rib eye would be one of my favorite cuts of meat, but it turned out to be a very pleasant surprise. Like the filet this was an excellent cut of meat, and thanks to both the meat and the seasoning the flavor was one of the best I have ever had in a steak. Their seasoning was the reason I thought this steak stood out from many others I had eaten, but the quality of the meat was the other important part of the equation. This has been my favorite steak at the restaurant, and anywhere I have eaten for quite a long time. 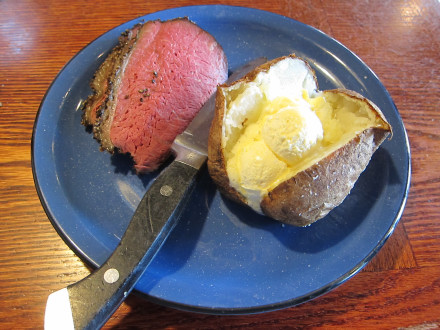 Smoked sirloin on the lunch menu

My traveling companion ordered the Smoked Sirloin from the lunch menu. Although I only sampled it, I can say that this was another excellent steak. This was a taste treat in another way–instead of the seasoning being one of its best features it was the fact that it was smoked, giving a barbecue flavor but with an extremely good cut of meat. My friend really enjoyed the peppercorn crust and thought it was one reason to state his dinner was the best out of the two, but I am equally convinced that the ribeye was the best. It may also make a difference in how you like the meat cooked–medium in the case of my ribeye and medium rare for the the sirloin.

In talking to the waitress I found out that the meat here is wet aged in a bag with its own juices. I know every steak restaurant has its own method of preparing the meats but I think the one here works particularly well.

Side Dishes
The Baked Potato was also very good, and the toppings which included “everything” met my criteria for an enjoyable potato. The menu includes a choice of several sides that can be ordered as substitutes. 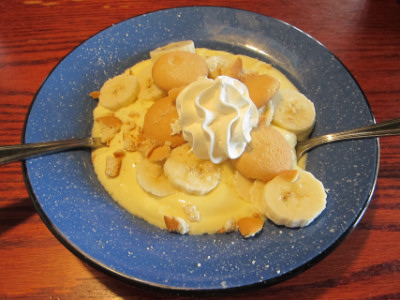 The Banana Pudding is excellent but comes in a very large portion, and I think is meant to be shared. In case some are thinking of eating all of it by themselves, I must give a stern warning much like the old man in the Monty Python and the Holy Grail movie who was advising the knights about a particularly mean-tempered rabbit who they thought could be easily handled by just one of them (in other words, they are likely to fail).

The restaurant also has peach cobbler and chocolate cake, which I assume come in equally large portions.

Additional Comments
Although all steak restaurants are expensive, Hoffbrau is one that I would call moderately priced. The best part, though, was that the meat was also very good and the seasoning was excellent.

The side dishes made the meal even better–the salad and potato were both very good, and I especially enjoyed the potato.

When choosing a steak restaurant in Amarillo it is important to read the reviews on Yelp and other web sites, because not all of the restaurants here are as good as one would expect for a place in cattle country. I thought Hoffbrau was a very good choice.